What are positional goods? Definition and meaning

Positional goods are products people buy because of their status symbol value, things that we purchase to keep up with the Joneses – to impress others. People who buy positional goods believe that those products signal their relative high standing within society – they think those products push them higher up the socioeconomic ladder and make them look good among their family members, friends and neighbors.

People buy positional goods because they want others to think that they have class, good taste, money and style.

We buy some things because they are intrinsically useful, such as a washing machine or detergent. Positional goods are purchased because of what they say about the person who acquires them. Nobody has ever bought a hammer, hand soap, screws, or paper towels in order to keep up with the Joneses – because those products are not positional goods. 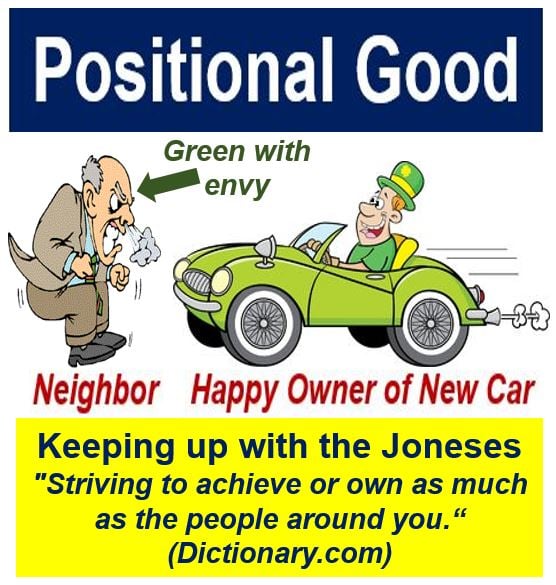 If the aim of the man in the car he just bought was to impress his neighbor, or even make him jealous, he was successful. It was a positional purchase, and in this case, the car can be classed as a positional good.

Positional goods are a way for an individual to signal or establish his or her status relative to those who do not own them – examples include fancy automobiles, vacations in expensive or exotic locations, or trendy designer clothing and footwear.

Although positional goods may exhibit superior qualities and features, most of their value is derived from the status their purchasers believe they receive by acquiring them.

A consumer could choose to buy a $30,000 Rolex instead of a $50 watch with a digital display, not because the more expensive one is a better timekeeper, but to impress people around them.

According to BusinessDictionary.com, by definition positional goods are:

“Services or products that derive their value from the fact that consumers prefer them to substitute goods and services. Goods or services with positionality, or value resulting from desirability, include luxury items such as yachts and expensive cars, access to exclusive entertainment venues, and other items that are seen as status markers.” 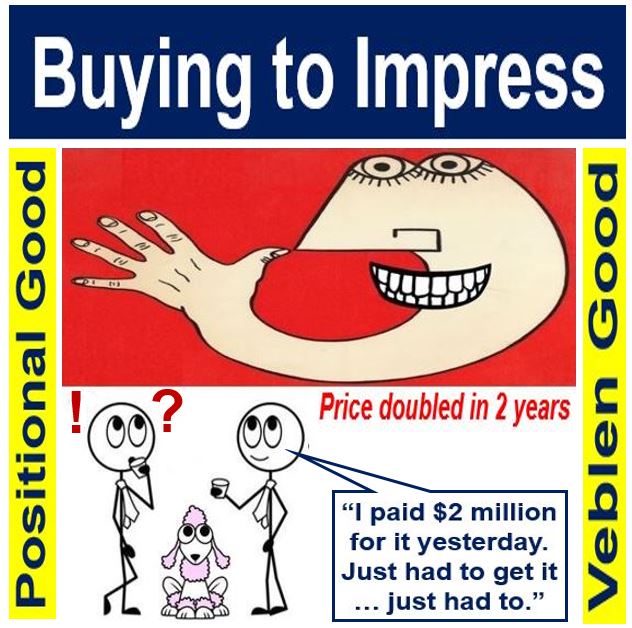 Most positional goods are very expensive, and when their prices rise, demand for them also increases. The opposite happens with ‘normal goods’. The man in this image has probably bought the painting to impress his friends – the product has status-enhancing qualities. He might also be a shrewd investor who believes that his purchase will be worth much more in the future. Products for which demand rises when prices go up are called Veblen goods.

The quantity of these types of goods, by necessity, is always limited. If their makers were to significantly increase their supply, they would lose their positional quality. Who would buy a particular sports car as a status symbol if half of the population had one?

In order for these goods to have positional power, they are also extremely expensive. If something costs a lot of money, presumably only wealthy people will be able to afford it.

Therefore, if somebody buys it, they are signaling to those around them that they belong to an exclusive group.

To achieve the objective of signaling high status, positional goods must be in limited supply and available only to individuals who belong to a desired group.

Positional goods to impress myself?

According to an article in The Human Condition, there are some status-like goods and services out there that we purchase purely for private enjoyment or to satisfy a purely private need.

Humans are bizarre creatures, especially when it comes to observing our purchasing habits. Many of us buy positional goods that nobody else is likely to know about.

Do we purchase these goods for the sake of demonstrating our status just to ourselves and nobody else? Apparently most of us do.

How many of us buy a name brand food in the supermarket instead of the knock-down store brand? Experts say we do this because we do not want to think of ourselves as cheap – a miser who survives on knock-off products.

Some categories of goods are bought purely for their positional quality. For example, why would somebody buy a cheap copy of designer shoes or a fake Rolex watch? These counterfeit products come complete with their fake labels.

The market for fake designer products is worth tens of billions of dollars globally. The market is growing in every part of the world. This clearly suggests that humans worldwide are interested in purchasing goods purely for their status appeal.

According to the BBC, the trade in fake designer products in the United Kingdom is massive and growing. Experts say it is putting hundreds of jobs at risk.

Every time somebody buys a fake Gucci bag, that is one less that official Gucci gets to sell, say the authentic makers of positional goods. People who buy fake positional goods say that the jobs argument is flawed. They would never buy a proper Gucci bag, so the company cannot lose a sale it would never have obtained.

The BBC says that fake designer hotspots exist across the whole of the UK, including Birmingham, Manchester and Newham in east London. Commonly faked items include Dr Dre headphones, branded phone covers, Swiss watches, and handbags.

Positional goods do not generally follow the typical economic laws of demand and supply. In the majority of cases, when something goes up in price, demand for it falls.

The opposite occurs with most positional goods – when their prices go up, people desire them more, and demand increases. Such goods are known as Veblen Goods.

If a woman buys a $2,000 handbag or a man purchases a $30,000 Rolex watch, they generally want to let others know. If the price of that watch or handbag suddenly plummeted, demand for them would probably fall, because they would have less of that status-enhancing power.

The term Veblen goods was named after Thorstain Bunde Veblen (1857-1929), a Norwegian-American economist and sociologist. He was famous as a witty critic of the capitalist system.

This video footage from the Richard Fowler Show quotes a study, from the University of Warwick in England, that found that people who purchase positional goods look like ass***** (expletive).