A posteriori – definition and meaning

A posteriori is a judgment or conclusion based on experience or by what others tell us about their experiences. For example, I know the Sun will set this evening because it always has. My a posteriori knowledge tells me that the sun will set again. The Sun setting is a conclusion I have from something I have experienced all my life.

I also know that millions of people in Tokyo will speak Japanese tomorrow. I have never been to Tokyo; it is not my experience. However, I know this from other people’s testimony. I have gained with knowledge by watching TV, listening to the radio, reading newspapers, and listening to other people.

Hence, my a posteriori knowledge tells me that the Sun will rise and that many Tokyo residents speak Japanese.

A priori vs. a posteriori

The term a posteriori contrasts with a priori. We gain a priori knowledge through pure reasoning. A priori comes from our intuition or innate ideas.

For example, I know that 2+2=4 because of pure reasoning; in other words, a priori knowledge. The sum does not happen because I have seen it happen, so I assume it will happen again.

The sum, 2+2=4, happens because I worked out the numbers in my head. I came to that conclusion because of logic rather than making a prediction due to experience.

According to Dictionary.com, a posteriori is:

“1. From particular instances to a general principle or law; based upon actual observation or upon experimental data: ‘An a posteriori argument that derives the theory from the evidence’. 2. Not existing in the mind prior to or independent of experience. 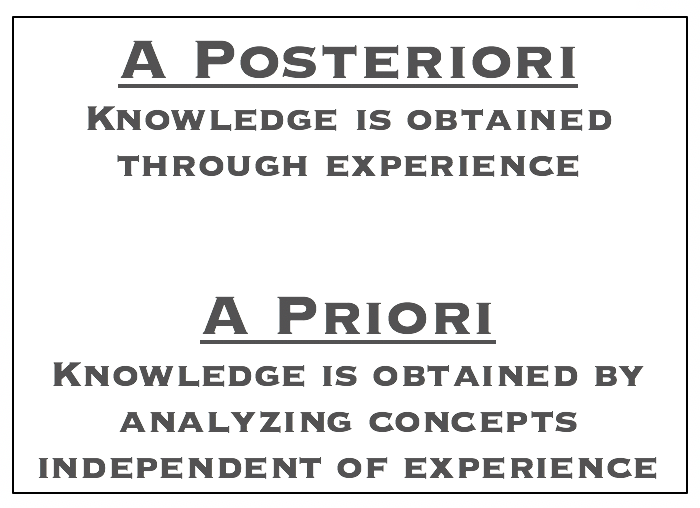 The University of Tennessee Martin’s Internet Encyclopedia of Philosophy makes the following comment regarding the two Latin terms:

We also call a posteriori knowledge empirical knowledge. With empirical thinking, we base our knowledge on experience or observation, rather than theory or pure logic.

Logic and mathematics, on the other hand, are a priori disciplines. Immanuel Kant (1724-1804), born in Königsberg, Prussia (now Kaliningrad, Russia), was probably the most influential thinker of the Enlightenment era. In fact, today we see him as one of the leading Western philosophers of all times. His works had a profound influence on later and contemporary philosophers. His works in the theory of knowledge (epistemology), ethics, and aesthetics especially, influenced philosophers.  (Image: adapted from philosophers.co.uk)

We gain most of our empirical knowledge through a combination of direct experience and what other people tell us.

Is the statement ‘God exists’ the result of empirical knowledge or pure logic? Most philosophers will say that it is a trick question because we can argue the answer either way.

If we propose that ‘God exists’ from design in the world, we are presenting an empirical argument. I have to experience ‘design’ to present the argument of God as the grand designer. Therefore, the argument is empirical, says one argument.

By arguing that ‘God exists‘ because it makes logical sense, then I am presenting an a priori analytical argument. “This is because, according to Anselm, existence is a logical necessity for God,” says an article in Philosophyzer.wordpress.com.