What is poverty? Definition and meaning

Poverty is the state of being poor, it is when the resources you have are nowhere near enough to meet your minimum requirements. It can mean not having enough to eat or clothe yourself properly, not being able to heat your home in the winter, having inadequate access to medical care when you are ill, not having enough money to buy the essentials for your children and other dependents, and failing to be able to pay this month’s rent.

Measuring poverty is not easy, and is frequently criticized for being subjective. The most common way to measure it for economists is to base it on people’s incomes.

If an individual or household earns less than the minimum required to meet basic needs, then they are poor. This minimum is known as the poverty line. 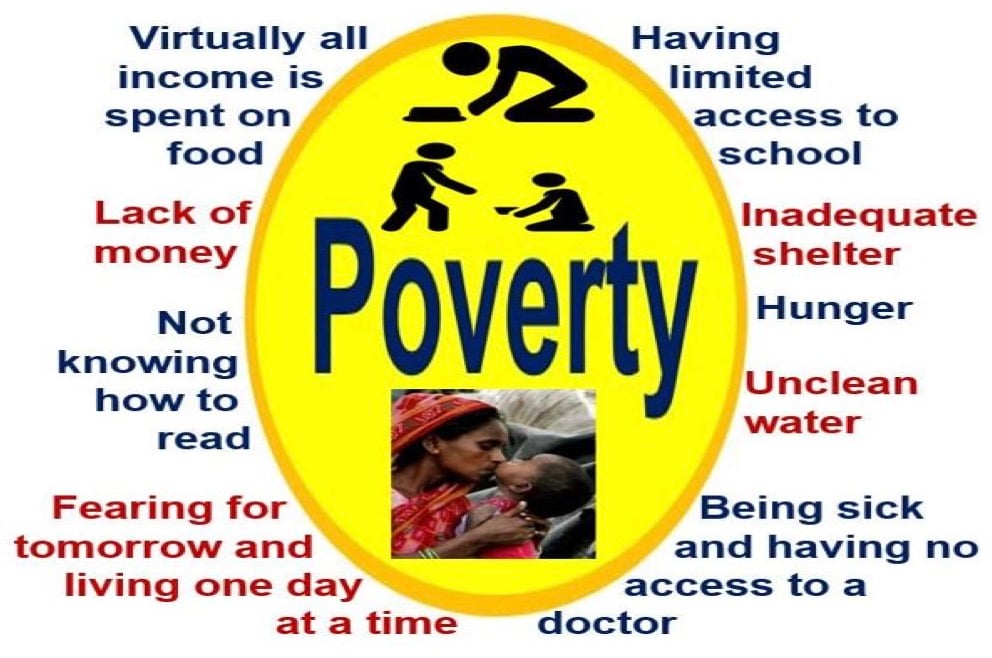 The definition of poverty varies considerably across the world. In the United States, it refers to a daily income of less than $16 per day for each household member, while in the developing nations it is anybody earning less than $1.25 per day.

What we define as being poor today might not have been the case one or two hundred years ago, or in another society. What is required to satisfy basic needs varies over time and across different societies.

“The most commonly used way to measure poverty is based on incomes. A person is considered poor if his or her income level falls below some minimum level necessary to meet basic needs. This minimum level is usually called the “poverty line”. What is necessary to satisfy basic needs varies across time and societies.”

“Therefore, poverty lines vary in time and place, and each country uses lines which are appropriate to its level of development, societal norms and values.”

The World Health Organization (WHO) says that being poor is associated with the undermining of several key human attributes, including health.

Poor people are exposed to considerably greater environmental and personal health risks, they are poorly nourished, have significantly less information, and are not able to access health care as easily as others. 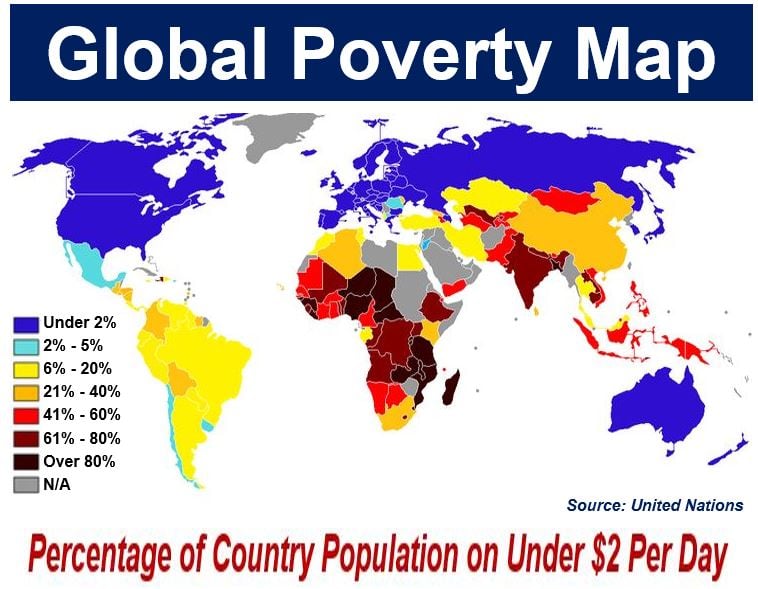 In large areas of sub-Saharan Africa, India and Bangladesh, more than sixty-one percent of the population lives in poverty. North Korea’s population is known to go through long periods of starvation, however, getting reliable data from that part of the world is very difficult. (Image: giveabillion.net)

People who are poor, therefore, have a higher risk of disability and illness. Illness can reduce learning ability, undermine productivity, destroy household savings, and lead to a significantly diminished quality of life, which together either perpetuate poverty or make people even poorer.

Many international agencies say that people who earn less than $2 per day live in poverty – the United Nations has a lower figure, $1.25 per day. However, the consequences of being poor, WHO says, exist on a relative scale.

In an article on poverty, WHO writes:

“The poorest of the poor, around the world, have the worst health. Within countries, the evidence shows that in general the lower an individual’s socioeconomic position the worse their health.”

“There is a social gradient in health that runs from top to bottom of the socioeconomic spectrum. This is a global phenomenon, seen in low, middle and high income countries.”

Extreme poverty, also referred to as absolute poverty, destitution or penury, means having no shelter, insufficient food, not enough clothing, and no access to proper health care. It is probably the only type of poverty where everybody across the world has the same definition.

In 1995, the United Nations defined extreme poverty as:

“A condition characterized by severe deprivation of basic human needs, including food, safe drinking water, sanitation facilities, health, shelter, education and information. It depends not only on income but also on access to services.” Even though the global economy is growing each year, a disproportionate amount of that new wealth is going to the top 10% richest people. The wealth inequality gap – the difference between the rich and the poor – has been widening significantly over the past thirty years. (Image: adapted from thinkprogress.org)

Most extremely poor people in the world reside in East Asia and the Pacific, South Asia, and sub-Saharan Africa. Nearly half of them life in China and India.

The United Nation’s Millennium Development Goal (MDG1), which was set in 2000 by 189 nations, aimed to reduce the extreme poverty rate by 50% by the year 2015. This goal was reached in 2010 – five years early. The long-term objective is to have no poor people anywhere in the world by 2030.

The United Nations (UN) reported that in 2010 – the most recent reliable data – approximately 1.2 billion people remained in extreme poverty globally. It is still a huge number, but is 700 million lower the 1.9 billion in 1990. The UN has determined that anybody earning less than $1.25 per day is extremely poor. In a Nov 2015 Reuters article, Eric M. Johnson wrote: “More than 500,000 people – a quarter of them children – were homeless in the United States this year amid scarce affordable housing across much of the nation, according to a study released on Thursday.”

According to an article published in the Financial Times in September 2015, the World Bank plans to increase its income-based benchmark for extreme poverty to $1.90 per day. As soon as this amount becomes official, the number of extremely poor people worldwide will increase considerably.

“Poverty is more than the lack of income and resources to ensure a sustainable livelihood. Its manifestations include hunger and malnutrition, limited access to education and other basic services, social discrimination and exclusion as well as the lack of participation in decision-making. Economic growth must be inclusive to provide sustainable jobs and promote equality.”

According to the United Nations: Urban poverty in India, as with most emerging economies across the world, is a direct effect of rural communities fleeing poverty. Apart from the massive underemployment and unemployment problem this creates, there is also a disproportionate housing and infrastructure problem present in every Indian city. (Image: poverties.org)

Poverty in the USA

PovertyUSA says that 43.1 million people, that is 13.5% of the population, lived in poverty in the United States in 2015. This was a full percentage point higher than in 2007, just before the global financial crisis hit.

In 2015, the number of people classed as poor was lower than in 2014 – the first time in five years that one year registered lower numbers than the year before.

A family of four in the USA is classed as poor if it earns less than $24,000 per year, i.e. less than the Federal government’s poverty threshold. This works out at $16.40 dollars per person per day, which is much higher than the UN’s global threshold of $1.25 per day.

For Americans with a disability, the poverty rate stood at 29% in 2014 – a total of 4 million Americans. British charity ‘Friends of the Elderly’ says: “A staggering 81% of people on low incomes are worried about paying their energy bills this winter. Over two-thirds (68%) of those on low incomes who have struggled with their energy bills have experienced stress as a result, and just over a fifth (22%) have experienced ill health due to cold homes.” (Image: fote.org.uk)

Poverty in the UK

In the UK, a household is defined as poor if its weekly income is below:

A household is deemed as poor if its income is at least 60% below the median household income.

“Britain is the world’s fifth richest country, yet poverty in Britain is rising. Paid work [is] failing to reduce poverty for many.” ‘Curitiba in English’ says that in 2014, approximately 7.2 Brazilians went hungry, while 54 million experienced food insecurity – that is almost one quarter of the whole population. “Food insecurity is defined as being unable to afford certain categories of food or having a well-founded concern about where the next meal will come from,” says the English-speaking newspaper. (Image: curitibainenglish.com.br)

Although poverty in Latin America is not as extreme as it is in sub-Saharan Africa and many parts of Asia, it is still too high, said panelists at the World Economic Forum on Latin America in Panama City two years ago. They said that Latin America’s challenge today is twofold:

From 2004 to 2014, between seventy and ninety million Latin Americans were lifted out of poverty, so says the World Bank. They left a hand-to-mouth existence and entered what economists refer to as the ‘consuming classes’ and ‘middle classes’.

Arif Naqvi, Group Chief Executive and Founder of The Abraaj Group, based in the United Arab Emirates, said:

“What you have in this region, although you are achieving success, is enormous income inequality and that leads to social issues. But it is not all doom and gloom. We are aspirational and growing, and have a great future ahead of us. The opportunities are mind-boggling.”

Video – What is Poverty?

This World Vision Australia video animation explores the nature of poverty and its relationship to the well-being of humans. There is much more to being poor than simply having a low income.