What is predatory pricing? Definition and examples

Predatory pricing involves charging very low prices, the aim being to get rid of competitors so that the supplier can charge considerably higher prices later. The predator is willing to sell at a loss – below cost – for a period, in the hope that its rivals either go bust or decide stop selling that product. When competing companies have left the market, the predator pushes prices back up.

Predatory pricing, when successful, can help the predator establish or re-establish a monopoly. Dumping – exporting goods at a lower price than at home or lower than the cost of production – is a type of predatory pricing.

It is a method used to deal with new companies that enter a market. If a monopoly is enjoying mega-profits, it is bound to attract new players into the scene.

If the predator’s competitors survive its predatory pricing strategy, the authorities in most countries will not intervene, because lower prices, more choice and a competitive market is good for consumers. They will only intervene if the competitors are killed off and the predator becomes a monopoly.

In response to a new company trying to break into the market, the incumbent dominant player may slash its prices and make a temporary loss. If it is a monopoly that has enjoyed huge profits for a long time, it is likely to have plenty of reserves to fund a price war.

Faced with an unprofitable price, the newcomer may be forced to leave the market.

As soon as the dominant company has kicked out the newcomer, it regains its monopoly position. Its success in the price war serves as a warning to any other commercial enterprise thinking of breaking into its market.

“Predatory conduct involves a firm deliberately setting the price of a product(s) below an appropriate measure of cost to incur losses on the sale of product(s) in the relevant market(s) for a period of time sufficient to eliminate, discipline, or deter entry or expansion of a competitor, in the expectation that the firm will thereafter recoup its losses by charging higher prices than would have prevailed in the absence of the impugned conduct. Predatory pricing may be implicit (through discounts or rebates, for example), or explicit.”

Is predatory pricing bad for consumers?

If predatory pricing – a price war – eventually results in competitors being kicked out and an increase in monopoly power, that is bad for the consumer. It will lead to abnormally-high prices in the long term as well as a lack of choice.

However, predatory pricing should not be confused with a fiercely-competitive market. Price wars are great for consumers if all the players survive. 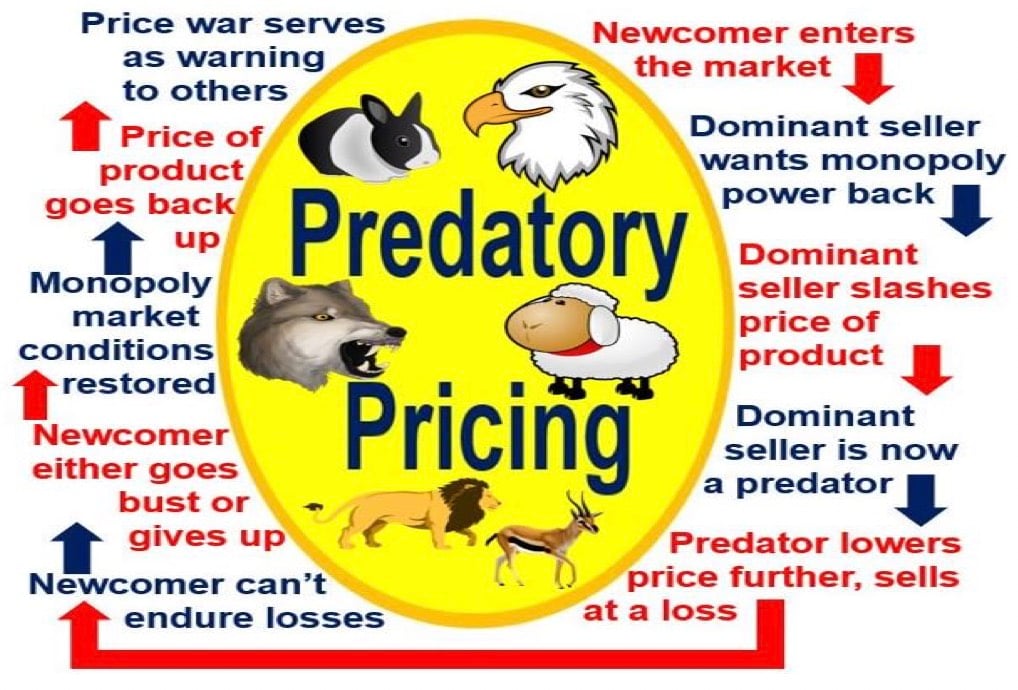 In the advanced economies, there are legal restrictions regarding predatory pricing. Depending on the circumstances and the country where the price war takes place, the predator could be deemed anti-competitive.

– United States: the predator could be subject to antitrust claims of manipulating the market to become a monopoly. Suppliers with substantial or dominant market shares are more likely to have the finger pointed at them.

However, US law is on the side of the consumer, and price wars are good for shoppers. So, the US Supreme Court has set high hurdles to antitrust claims based on predatory pricing.

The plaintiff has to show to the court that the predator’s practices will not only affect competitors but also the market as a whole – that healthy competition is under threat.

If there is a chance that the market newcomers will prevent the predator from recovering its investment through ultra-competitive pricing, the antitrust claim will most probably fail.

– European Union: pricing below cost is not allowed when the company setting that price has a dominant position in the market, and the pricing is believed to have an anti-competitive effects, according to Article 102 of the Treaty on the Functioning of the European Union.

– Canada: section 50 of the Competition Act, which used to criminalize predatory pricing, was repealed (annulled, cancelled). It was replaced by sections 78 & 79, which deal with the matter civilly.

The new sections prohibit firms from selling goods and services at unreasonably low prices with the aim of eliminating a rival or competitors.

Canada’s Competition Bureau has set up some Predatory Pricing Guidelines which define what is considered to be ‘unreasonably’ low pricing.

Canada’s Competition Bureau determines whether a product is being sold at an unreasonable price in the following way:

In an article – ‘EU Competition Practice on Predatory Pricing‘ – published by the European Commission, Philip Lowe wrote: “Predatory prices as such are prices deemed to be a threat to the survival or entry of efficient competitors, because they are set at a level that can only be explained by the purpose of eliminating equally or more efficient competitors or deterring their entry. The classical example of predatory prices are prices below average variable costs, following the second version of the Areeda-Turner test .”

Some examples include company X reducing its prices to the point where the competition cannot compete. This strategy is to put small businesses out of business and create a monopoly.

Predatory pricing – how to beat it

There is a story in South Korea about how a small corner shop beat a large supermarket chain at its own game. The supermarket wanted to stop a corner shop from selling a product, so it started to sell it at a much lower price.

The small store did the same – it reduced the price of that product by exactly the same amount.

The supermarket lowered its price further, and the very next day it was matched by the little store. This went on for three months, until both retail outlets were selling it at an insanely low price.

A university student who was studying retailing was fascinated by how the corner shop was able to continue selling that product so cheaply for so long. He went up to the owner of the small store and asked:

“You clearly cannot buy that product in large quantities, like the supermarket can. So, how do you match its prices? How have you managed to continue for so long”

The owner of the store replied:

“I buy it from the supermarket and sell it at cost. The supermarket is the only one losing money in this price was – not me. I can keep this going as long as it wants to.”

A month later the large supermarket company gave up, and started selling the product at a reasonable price again.

This video by The Economist explains what predatory pricing is and why some companies opt for that strategy.