What is price discrimination? Definition and meaning

Price discrimination involves selling one product at different prices to different consumers – the aim being to maximize profits and sales. In the seller’s Utopian market, often referred to as pure price discrimination, the supplier charges each buyer the maximum price that he or she is willing to pay.

In today’s markets, the seller often places customers in different groups, based on a number of features, and charges each group a different price.

According to ft.com/lexicon, the Financial Times glossary of terms, price discrimination occurs:

“When a company sets different prices for the same product in different markets. This may be an attempt to benefit from specific differences in customer profiles, or a reflection of varied competitive pressures.” 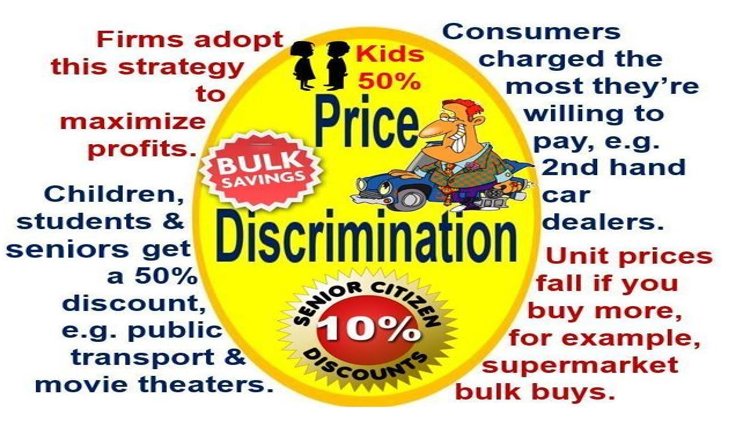 In literally hundreds of sectors, price discrimination is common. For example, a 50-year-old female librarian who has been driving since she was 18 and has never had an accident will pay much less to insure her Porsche sports car than a 24-year-old rock star who has had one accident.

Price discrimination, also known as equity pricing, tiered pricing, and preferential pricing, is common in several different types of markets and countries – both online and offline.

It even exists among sellers with no significant market power. It generally reflects the competitive behavior that competition policy strives to promote – either be encouraging companies to serve more buyers, or by boosting the incentive to compete “and hence has no anticompetitive purpose or effect,” says the OECD (Organisation for Economic Co-operation and Development).

Sometimes, however, price discrimination may be a concern, especially if it has distortionary, exploitative or exclusionary effects.

– First Degree: also known as perfect price discrimination. Customers are charged the maximum price they are willing to pay. There is no **consumer surplus.

** Consumer surplus is the difference between how much a consumer is willing to pay and how much he or she actually pays.

This method is the most difficult to adopt because the seller needs to know each of its consumers perfectly – how can you know how much each individual buyer is willing to pay?

Car dealers – where the price on the vehicle is negotiable – especially second-hand automobiles, often use this approach. Cancun is a famous vacation resort on Mexico’s Caribbean coast. In its Hotel Zone there are many restaurants. If you are a local resident and can prove it (with ID), you will get a 15% discount on your bill. It is known locally in Spanish as ‘descuento para Cancunense’ (discount for Cancun locals). My wife is a Cancunense, so whenever I eat with her, we pay 15% less.

– Second Degree: prices go down after the customer has bought or used a certain quantity. This type is commonly used by companies that cannot differentiate between different kinds of buyers.

The supplier creates a schedule of declining prices, depending on how much is consumed.

For example, many telecommunications companies reduce their call charges per minute after a customer has used up 10 minutes. Supermarkets will often offer you bulk discounts – if you buy one bar of hand soap it will cost $2, but a family pack containing 10 bars is sold at $6, i.e. 60 cents each.

– Third Degree: the price you pay depends on which group of people you belong to. For example, when traveling in public transport or paying for a ticket at the cinema, students, children and people aged 65+ pay less. The seller sets the price that will accommodate the buyer.

” This type of discrimination can be seen in the movie theater business. Student and senior discounts are given because these groups of consumers have more elastic price **elasticity of demand.”

“It is because of this discrimination that the firm is able to extract the consumer surplus of those who might not otherwise pay the standard rate. Third degree price discrimination relies on the firm being able to separate the segments. If separation of segments is not possible then the product can be transferred.”

** Price elasticity of demand is a measure of how much demand is affected by a product’s or service’s price change.

Sometimes the advantage appears to be just for the seller, who manages to eliminate all the consumer surplus.

However, if you are a student or an elderly individual traveling on a bus or going to watch a movie at the cinema, you benefit from paying less than other people.

Even the other adults who get no discounts on public transport or the movie theater benefit from the discounts offered to students, children and the over 65s. Income for the cinema might be considerably lower if everybody had to pay the same price, which would mean that it would have to raise the price of its tickets – to a price that is even higher than what the adults with no discounts are currently paying.

The additional income earned by the seller by offering discounts (to people who generally have less money), means that tickets for non-discount customers are also lower.

Lets take the example of movie theaters. Imagine a company called Movies Galore, that has 350 movie theaters across the country. Each ticket to watch a film costs $10 for adults, and $5 for children, students, and seniors (aged 65+).

Let’s say its sales in one year are broken down as follows:

What would happen if it offered no discounts. Perhaps annual sales would be as follows:

This Marginal Revolution University video explains what price discrimination is and why companies adopt it – mainly to maximize profits.