What is private equity? Definition and meaning

Private equity refers to the debts and shares of companies that are not publicly traded on a stock exchange. The term may also refer to venture capital that is invested in newly started businesses, known as startups.

Private equity shares are less liquid than publicly traded equity – sellers of private stocks must first locate interested buyers – and for that reason investors generally expect to earn a higher equity risk premium from them.

In other words, it is money that people, companies and other entities have invested in private companies; ones that are not listed on a stock exchange.

The Economist’s glossary of terms has the following definition regarding private equity:

“When a firm’s shares are held privately and not traded in the public markets. Private equity includes shares in both mature private companies and, as venture, in newly started businesses.”

Private equity investors generally expect to make their money when:

– The company is floated; when it goes public (when it launches an initial public offering or IPO).

– When it is recapitalized.

Sometimes, private equity is grouped into a broader category, known as Private Capital, which is usually used to describe capital that supports any long-term illiquid investment strategy. 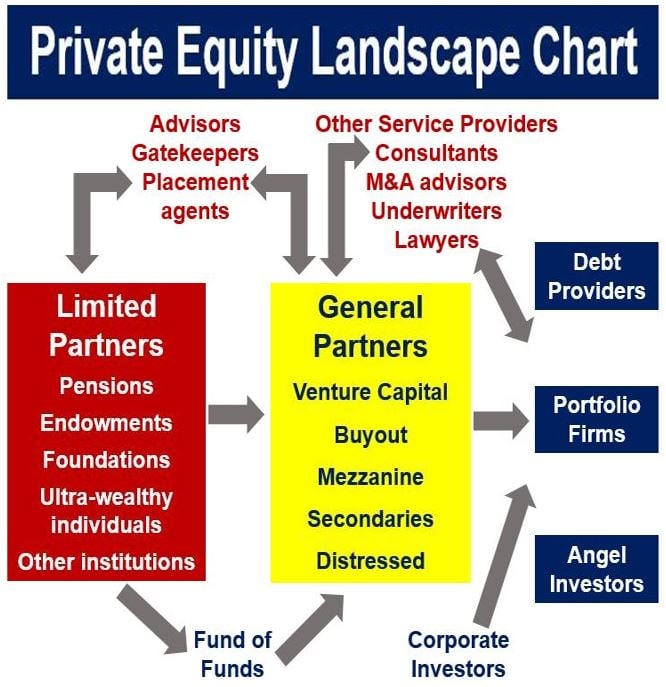 In the private equity world, there are limited and general partners. Some investors get stuck in and bring their own team of managers, while others, such as venture capitalists, prefer a more hands-off approach. (Image: adapted from travelcapitalist.com)

Both types of investments involve companies and businesses that are not listed in a stock exchange, but they are not the same. Even though, as explained below, the two terms have different meanings, venture capital is often included as one of the types of private equity (there is some overlap).

Private equity, as a rule of thumb, refers to investments made in existing commercial enterprises that are not profitable, and turning them into money-making companies.

It involves investments aimed at making an ongoing company more streamlined so that it can make money.

These types of investors generally buy out the whole business so that they are free to restructure it in their own way. They usually bring in new managers who try to turn the company round.

Venture capitalists invest in startups – they buy in for an agreed amount of money in the hope of seeing their investment grow.

A venture capitalist seeks out young businesses that he or she can invest in and make money. Typically, they invest an agreed amount for a percentage ownership of the business.

Venture capitalists do not usually get involved in the running of the startup – they are very much hands-off. They are rarely interested in making an outright purchase of a company.