What is a prospectus? Definition and meaning

A prospectus can either mean a disclosure document that describes a financial security for interested investors, or a brochure or some kind of document describing the major features, services and attractions of a school, university, club, association or other entity.

A prospectus may also be a document that describes a proposed endeavor or undertaking, such as a literary work, which a person proposes to write.

In this article, we shall focus on its financial meaning – a disclosure document read by potential buyers of a financial security.

The document typically contains material for potential buyers regarding bonds, mutual funds, stocks or other investments.

A prospectus has a description of the company’s business, biographies of its officers and directors, details of how and how much they are paid, financial statements, any litigation that is currently underway, and other relevant information. 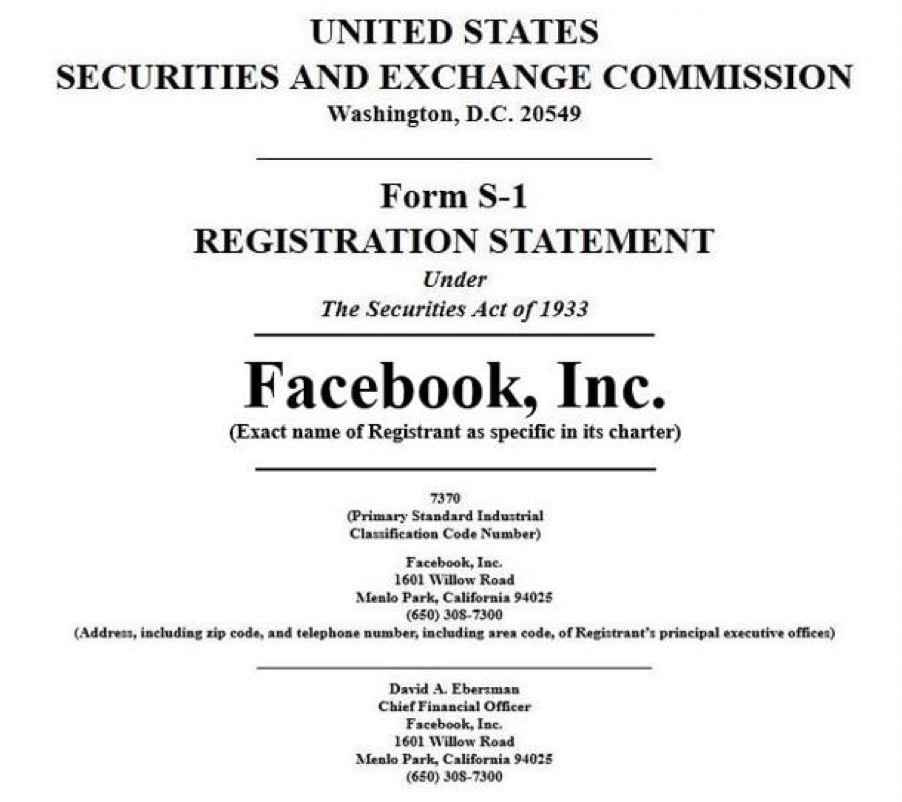 This SEC image is of the preliminary prospectus filed by Facebook Inc. prior to holding its first IPO in February 2012. (Image: sec.gov/Archives)

Leading up to an IPO (initial public offering) or any individual securities offering, the brokerages or underwriters distribute the prospectuses to potential investors.

The plural is prospectuses. You will sometimes see the word prospecti used as the plural form.

However, in more than 99% of cases today, the plural forms of Latin words used in the English language, such as stadium, referendum and prospectus are ‘stadiums, referendums and prospectuses’, rather than ‘stadia, referenda or prospecti’.

Which one you use, as the speaker of the UK House of Commons once said “Is a matter of taste.”

Prospectus requirements in the USA

In the United States in a securities offering, a prospectus has to be filed with the SEC (Securities and Exchange Commission) – it forms part of the registration statement.

Prospectuses may not be used by the issuer to finalize sales until the SEC declares that the registration statement complies on its face with disclosure regulations – until it is declared effective.

If a company has filed Form 10-K with the SEC before, has a market capitalization greater than a certain amount, and takes a number of procedural steps, it is allowed to offer securities using a simplified prospectus that refers to its SEC filings.

When an offering does not have to be registered with the SEC, the document is called an offering circular or offering memorandum.

Prospectuses are typically prepared with the assistance of the bookrunner, also known as the bookrunning manager – the underwriter acting as issue manager.

In the United Kingdom, the publication of information in relation to a securities issue is governed by the Prospectus Rules, which implement the European law Prospective Directive.

The document must be published where certain kinds of securities are either requested for admission on a regulated market or offered to the public. The only regulated market in Britain is the London Stock Exchange full list.

Neither the PSM (Professional Securities Market) nor the AIM (Alternative Investment Market) constitute regulated markets. There are several exceptions to having to publish a prospectus, although an exempt firm might still have to publish listing particulars where it seeks the admission of its shares to the full list.

In the UK, the document must be approved by the Financial Conduct Authority (FCA).

Video – What is a prospectus?

This Investors Trading Academy video explains what a prospectus is using simple terminology and straightforward examples.