What is psychological pricing? Definition and examples

Psychological pricing is a marketing strategy where prices are expressed in a way that appeals more to consumers.

It is a type of pricing that aims at appealing to a customer’s emotional side.

Psychological pricing is one of the reasons for the formation of price points, i.e., prices at which demand for a given product is supposed to stay relatively high.

There are two forms of psychological pricing:

Reducing the left digits of a price by one is one of the most popular strategies retailers use. Charm pricing refers to selling products at a price just below a whole number, e.g, $7.99 instead of $8.00 or $39 instead of $40. This 9-ending pricing tactic is believed by some experts to be effective because consumers tend to pay less attention to the rightmost two digits.

In 2005, Manoj Thomas and Vicki Morwitz published a study on why nine-ending prices are perceived to be smaller than a price one cent higher.

Another experiment was carried out by researchers at University of Chicago and MIT which compared the sales volume of a woman’s dress by pricing one with a $9 ending, another $5 lower, and one $5 higher (e.g, $39, $34, and $44). Three studies were conducted with two different national mail-order companies that sell moderately priced women’s clothing.

According to the abstract: “The data yield two conclusions. First, use of a $9 price ending increased demand in all three experiments. Second, the increase in demand was stronger for new items than for items that the retailer had sold in previous years. There is also some evidence that $9 price endings are less effective when retailers use ‘‘Sale’’ cues. Together, these results suggest that $9-endings may be more effective when customers have limited information, which may in turn help to explain why retailers do not use $9 price endings on every item.”

Charm pricing is used by many retailers to make a price seem more appealing to consumers. The reason this strategy works is based on the theory that consumers perceive these prices to be much lower than they actually are as they round them down to the next lowest monetary unit. 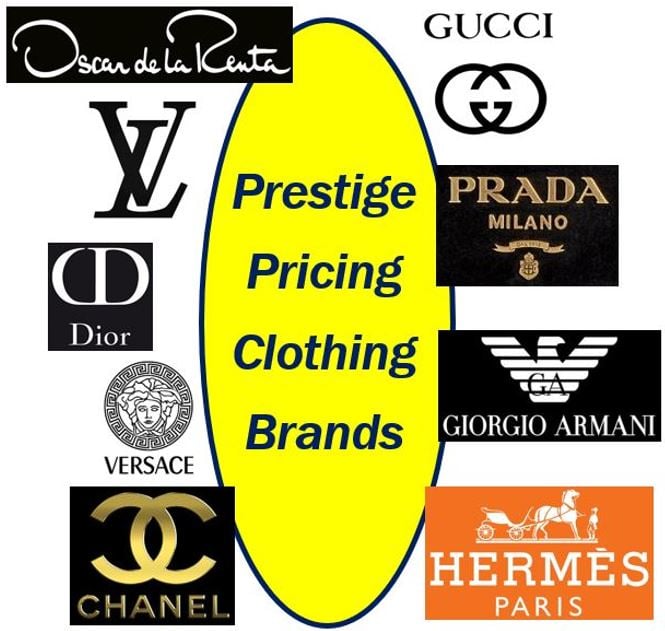 Prestige pricing is the practice of setting prices higher than normal because lower prices will have a negative impact on sales.

This strategy works by attracting customers who associate higher prices with superior quality. This strategy adds exclusivity to the product which can appeal to certain customers.

Luxury clothing brands use prestige pricing because their customers value the association with the brand and are willing to pay the relatively high cost of their products.