What is the quantity theory of money? Definition and meaning

Monetarism is a school of thought that claims that high inflation is caused by raising the money supply at a faster rate than GDP (gross domestic product) growth. If the money supply is controlled, the rest of the economy will look after itself, so say monetarists.

Milton Friedman (1912-2006), an American economist who was awarded the 1976 Nobel Memorial Prize in Economic Sciences for his research on monetary history and theory, consumption analysis, and the complexity of stabilization policy, once said:

“Inflation is always and everywhere a monetary phenomenon.” 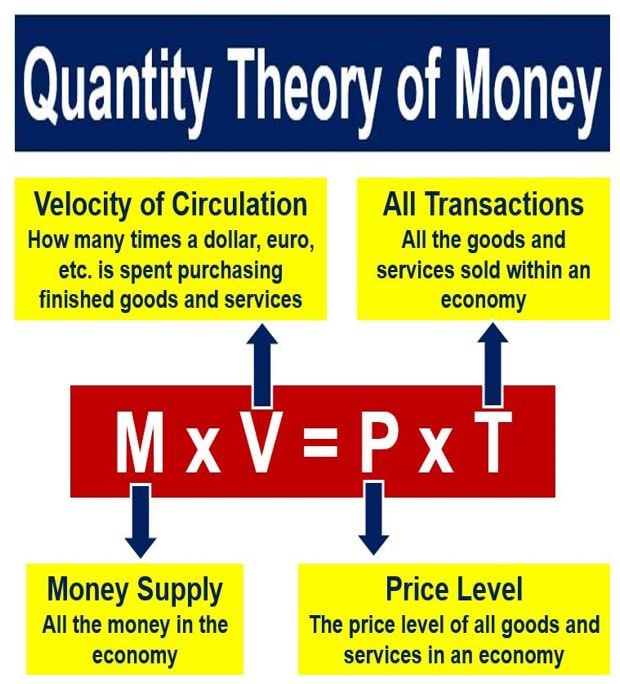 How much money we have in total (M) times how many times that money is spent (V), covers the actions of buyers. The stuff we sell (P) times the prices we charge (T), covers the actions of sellers. The left side (M x V) is total Marginal GDP from the buyers’ point of view, and the right side (P x T) is also total Marginal GDP, but from the sellers’ point of view. Given that everything that is sold is, by definition, purchased by someone, the equation above is true by definition.

The quantity theory of money is built on an equation created by Irving Fisher (1867-1947), an American economist, inventor, statistician and progressive social campaigner. The equation is:

M x V = P x T
M = the stock of money. V = the velocity of circulation. P = the average price level. T = all the goods and services sold within an economy over a given time (some economist may use the letter ‘Y’ for this value)

In its purest form, the quantity theory of money assumes that T and V are both constant, at least over the short-term. Therefore, any change in M triggers an immediate change in P, i.e. if you boost the money supply you will cause inflation.

Up until the 1930s, when Maynard Keynes (1883-1946) – a British economist whose ideas fundamentally changed the theory and practice of macroeconomics and many leaders’ economic policies – came onto the scene, the quantity theory of money was orthodoxy.

Keynes challenged the theory, pointing out that the money supply appeared to lead to a decline in the velocity of circulation, and to rises in real income, thus contradicting the classical dichotomy. 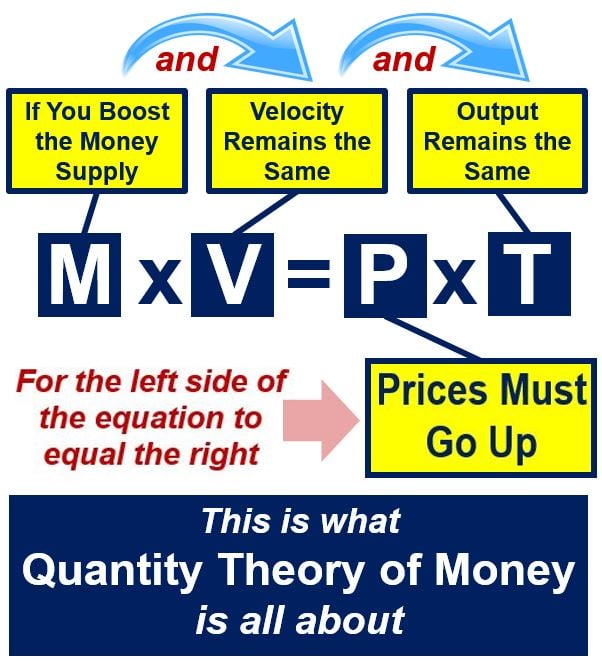 Critics of the quantity theory of money, such as Maynard Keynes, said you cannot expect the money supply to increase and nothing happen to, for example, the velocity of circulation.

Later, ardent monetarists, including Friedman, admitted that V could change as a consequence of variations in M. However, Friedman stressed that this only occurred in predictable and stable ways that did not challenge the main thrust of the quantity theory of money.

Despite Friedman’s claim, a number of nations’ economies did not perform as well as expected when monetarist policies were applied in the 1980s – a fact that even Friedman eventually had to accept.

Ludwig von Mises (1881-1973), a theoretical Austrian School economist, who lectured and wrote extensively on behalf of classical liberalism, said that while the quantity theory of money – at its core – was valid, it should not focus on the money supply without adequately explaining the demand for money.

“[The theory] fails to explain the mechanism of variations in the value of money.”

Paul Krugman, an American economist, currently Distinguished Professor of Economics at the Graduate Center of the City University of New York – gave empirical evidence that the quantity system of money does not occur when an economy is in a **liquidity trap. Even if you triple the money supply when an economy is stuck in such a situation, there is no significant (measurable) effect on prices, Krugman added.

** A liquidity trap is a situation in which a central bank’s cash injections into private banking to lower interest rates, and thus boost economic activity, have no effect. The aim is to get companies and individuals to borrow and spend more. However, everybody continues hoarding cash and is not willing to take risks. In the Great Depression of the 1930s and also in the 1990s, the US and Japan respectively experienced a liquidity trap.

In an article – The Quantity Concept of Money – published in Economic SYNOPSES, which belongs to the Federal Reserve Bank of St. Louis, the author wrote:

“A crucial assumption behind this claim is that the velocity of money or its growth rate is constant and money growth has no effect on real GDP growth—at least at a sufficiently long horizon.”

This MBN video explains what the quantity theory of money is in a way that’s simple and easy to understand.