What is a quota? Definition and meaning

Quota, in the world of business and economics, has two meanings: 1. A restriction that the government imposes on imports. In other words, an import limit. With this meaning it is a form of protectionism. 2. A proportionate part or share, such as a sales quota, i.e. the target that companies’ salespeople must hit each week, month, quarter or year.

Protectionism is an attempt by a nation’s government to restrict imports or boost exports by imposing quotas, tariffs, and other barriers to trade.

When governments impose a quota on a specific import, their aim is usually to protect domestic suppliers.

For example, if Country A imposes a limit on the number of cars imported from Country B to, say, 5,000 per year, it is limiting the supply, which also raises the price, thus helping domestic car makers.

An import or export quota may be a limit on the number of goods, or the total monetary value over a specific time. Sometimes quotas are aimed at specific countries rather than products.

Trade quotas are not the same as customs or tariffs, which are taxes placed on exported or imported goods and services leaving or entering a country, but place no limits on quantities traded.

However, both tariffs and quotas are protective measures that governments impose in their attempt to improve their country’s balance of trade.

According to ft.lexicon.com, to define a quota is:

“A limit on the quantity of imports of a certain good. Some quotas are allocated to specific countries, while others are universal.”

Pros and cons of quotas

All protective measures imposed by governments aimed at reducing imports run the risk of triggering trade disputes or wars between countries.

In 2014, there was a trade dispute between the United States and China regarding silicon solar panels which were being produced by China and exported to the US.

The US had proposed to raise the 19% tariffs on the Chinese solar panels to 35%.

China responded to this proposal by threatening to raise tariffs on a range of goods imported from the US. It also started hounding the offices and facilities of American multinationals in China with regulatory license problems and sudden inspections.

Economists today warn that quotas are risky and tend to cause more problems than solutions for a country’s economy. However, economic historians point out that during the 19th century they worked.

The dominant European countries that grew considerably faster were the protectionist ones.

GDP stands for gross domestic product. GDP equals everything an economy produced over a given period.

Protectionists also argue that ‘infant’ domestic industries need protection. Specifically, they need protection from giant foreign multinationals if you want them to develop and grow.

‘Infant domestic industries’ are those that are just getting off the ground.

Sales quotas are individual sales target figures that a company assigns to each salesperson. Distributors, sales units, and dealers may also have to meet quotas.

Most sales quotas are for weekly, monthly, quarterly, and annual performances. Companies either set them in monetary figures or volume, i.e., the total number of items. 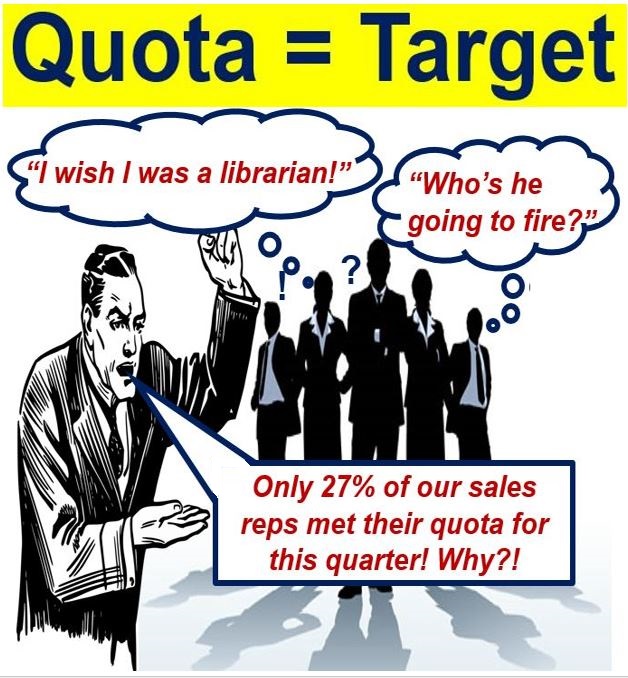 In sales, a quota can mean a target that your managers set you. You have to meet that target by the end of a specified period. The term can also refer to a quantity that you set yourself. For example, somebody might say “During my diet, I consumed my daily quota of fruit and vegetables.”

Quota must be realistic

For a sales quota to be effective, it must be feasible. In other words, the majority of a company’s sales staff should be able to achieve it.

According to superoffice.com, a surprising 23% of all respondents in an extensive survey said they did not know whether their teams had achieved their sales quota.

The study also reported that sixty-seven percent of all salespeople regularly miss their quota.