What is the rational expectations theory? Definition and meaning

Rational expectations theory, the theory of rational expectations (TRE), or the rational expectations hypothesis, is a theory about economic behavior. It states that on average, we can quite accurately predict future conditions and take appropriate measures. We do this even though we do not fully understand the causal relationships underlying events and our own thinking. It is how people think about the future, economists say.

None of us is a fortune teller, i.e., we cannot predict the future 100% perfectly. However, the theory of rational expectations assumes that over time, shocks – unexpected events – will cancel each other out. Therefore, on average, most people’s expectations about the future will be fairly accurate.

Our predictions are fairly accurate because most of us form our expectations on a rational basis. We use all the data available to us as best we can. We also learn from our mistakes and experiences. 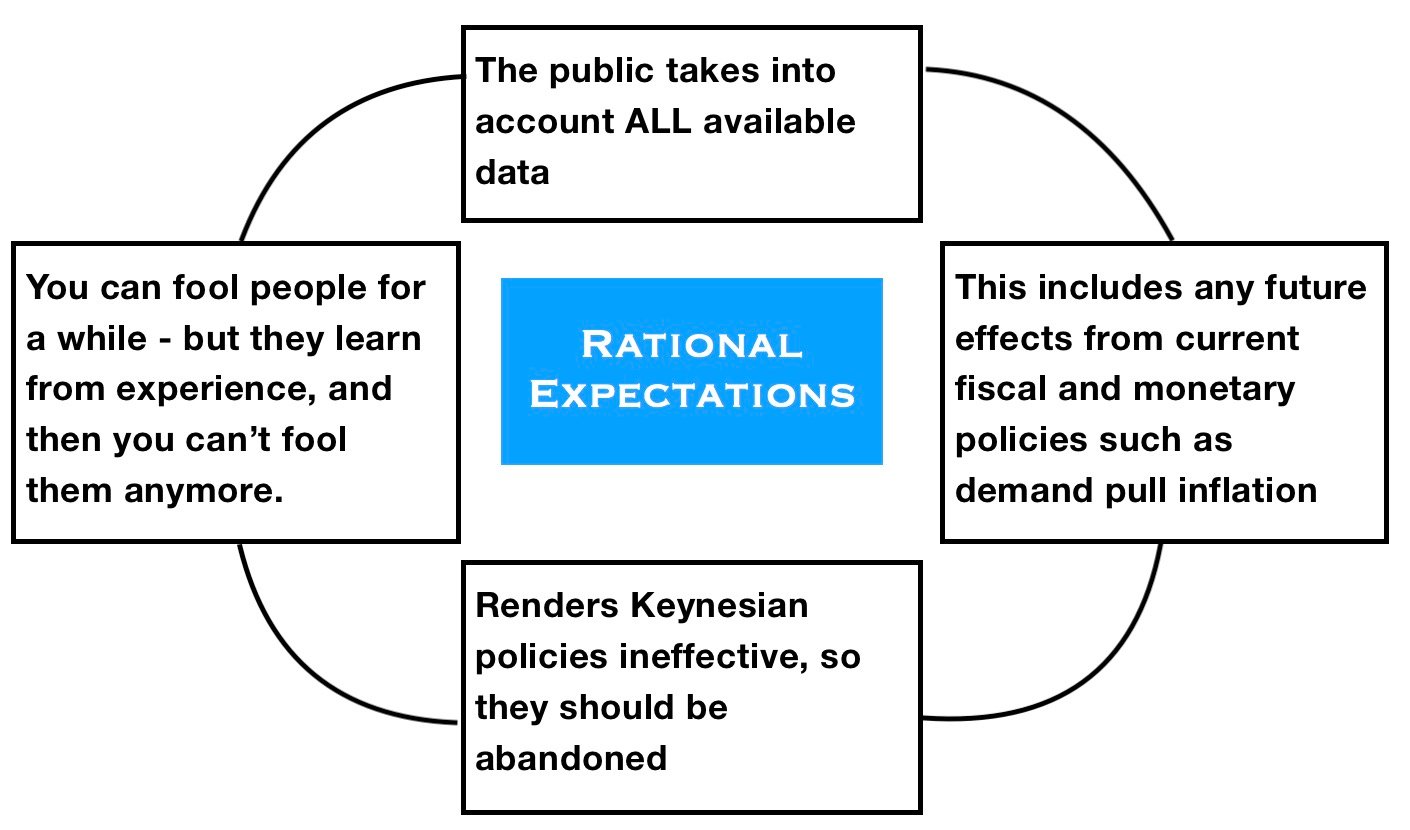 Rational expectations theory says that we look at ALL the available data – what happened, what is happening, what policies the government is implementing, plus what it is considering – when making predictions about what will happen in the future. And then we take appropriate measures.

According to financial-dictionary.thefreedictionary.com, to define rational expectations theory is:

“In economics, a theory stating that economic actors make decisions based on their expectations for the future, which are based on their observations and past experiences.”

“A basic example of rational expectations theory is a situation in which a consumer delays buying a certain good because, based on his/her observations and experiences, he/she believes that the price will be less expensive in a month. If enough consumers believe that, demand eases and the good is likely to actually be less expensive next month. Thus, the consumer waits a month before buying the good.”

Rational expectations theory vs. other theories

The rational expectations theory clashes with other theories of how we look into the future, such as adaptive expectations, which says that we base our predictions on past and changing trends. It also contrasts with behavioral economics, which assumes that our expectations are to a certain degree irrational and the result of psychological biases.

Robert Emerson Lucas Jr., an American economist at the University of Chicago, who is widely regarded as the key figure in the development of the new classical approach to classical macroeconomics, was awarded the 1995 Nobel Prize in Economics for his investigations into the implications of the assumption of the rational expectations theory. 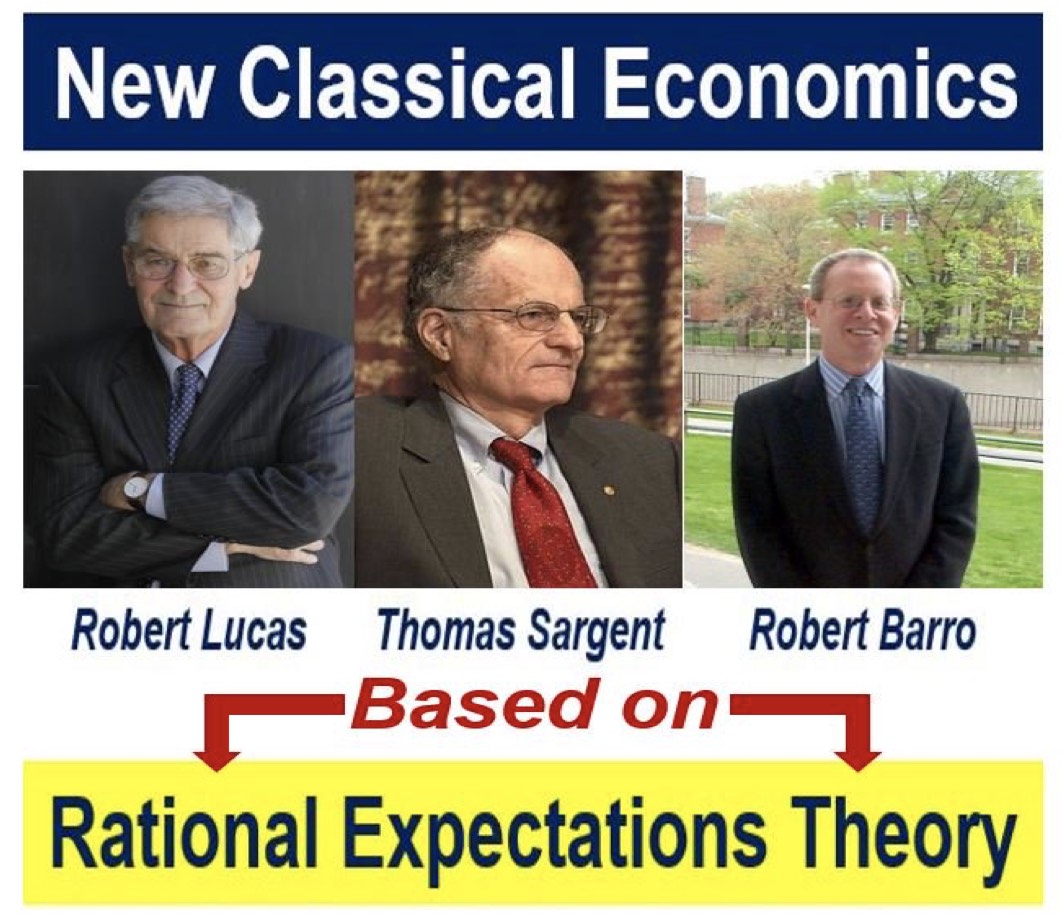 New Classical Economics is based on the theory of rational expectations. This theory was developed by Robert Lucas, of the University of Chicago, along with Thomas Sargent from Stanford University, and Robert Barro of Harvard. The theory provides a sharp contrast to ‘adaptive expectations’. (Images: Robert Lucas – utc.edu. Thomas Sargent – Wikipedia. Robert Barro – rbarro.com)

Lucas incorporated the theory into a dynamic general equilibrium model. In his model, the agents were rational. Based on the available information, they formed expectations about future quantities and prices. Also based on their expectations, they acted to make the best of their expected lifetime utility.

Lucas’ studies and findings became popular with followers of monetarism. They became popular because what he said appeared to prove that Keynes’ theories on demand management could not work.

Monetarism is a school of thought that says that high inflation occurs when the money supply expands faster than GDP (gross domestic product) growth – if we can control the money supply, the rest of the economy can take care of itself, monetarists say.

In his 1972 paper – Expectations and the Neutrality of Money – published in the Journal of Economic Theory, Lucas wrote:

“The relationship, essentially a variant of the well-known Phillips curve, is derived within a framework from which all forms of ‘money illusion’ are rigorously excluded: all prices are market clearing, all agents behave optimally in light of their objectives and expectations, and expectations are formed optimally.”

With rational expectations, we learn to anticipate changes in government policy and act accordingly. For government policy to work properly, its macroeconomic fine tweaking must occur without the population forecasting it. In other words, the government must fool the public.

In other words, rational expectations theory suggests that our current expectations in the economy are equivalent to what we think the economy’s future state will become. This contrasts with the idea that it is government policy that influences our decisions.

For example, if government expansionary fiscal measures caused inflation to rise last year, people will factor this in. Specifically, they will factor it into their future expectations.

If the government pursues more fiscal stimulus in the second year, unemployment may not decline at all. It doesn’t decline because people’s inflation expectations immediately adjust in response to government policy.

If the government expands the money supply when people’s expectations of inflation are low, the real value of government debt may decline. This is because inflation grows and becomes greater than the nominal bond yield the government promises to pay.

However, in future, members of the public will be more reluctant to purchase government bonds. They will be reluctant because they have factored in the risk of future inflation.

In his Nobel lectures, Lucas said:

Goodhart’s law – when a measure becomes a target, it ceases to be a good measure – is implicit in rational expectations.