What is rationing? Definition and examples

Rationing usually refers to a fixed allowance of foods or any provisions, usually in countries or regions where there is a shortage, or demand significantly outweighs supply. It is the process of a governing body – an authority – controlling the issuance of products and services to consumers. In times of war, economic crisis, or following natural disasters, governments may impose rationing of certain goods that are in short supply. In communist economies today and in the past, rationing is/was common.

In the 1973 energy crisis, there was rationing of gasoline (UK: petrol) in many countries. The authorities as well as filling stations took the measure to try to prevent gasoline prices from going through the roof, and attempted to make sure that the scarce resource was as evenly distributed as possible. 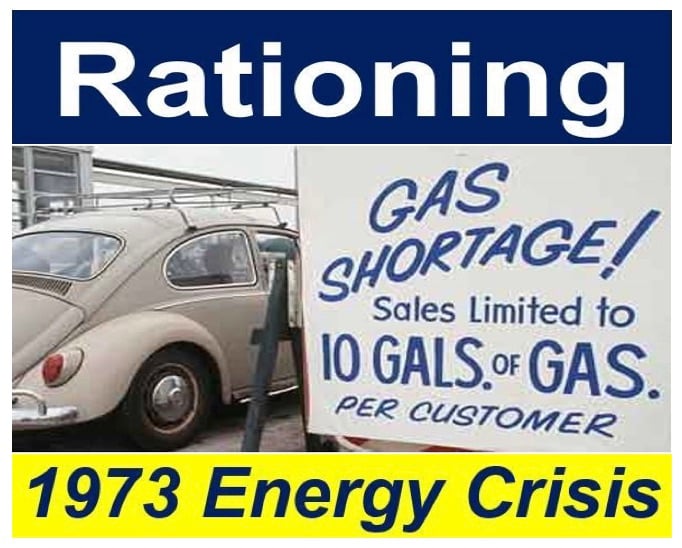 During the 1973 energy crisis, gasoline was rationed in the United States and several other countries.

Civilian rationing has been around for thousands of years, either because the country is at war, a serious disease has decimated crops or livestock, or a natural disaster such as a fire, earthquake, prolonged drought, hurricane or volcanic eruption occurred. Rationing may also be necessary after a terrorist attack.

During civilian rationing, each individual is issued with either a ration book or coupons, which allow them to buy a specific amount of a product each week or month.

Rationing typically includes food, fuel, materials for clothing (leather), items of clothing, and other materials required for the war or emergency effort.

When replacements for certain goods and services are not available, FEMA (the US Federal Emergency Management Agency) has established a set of guidelines for civilians on rationing water and food supplies.

FEMA states that in times of crisis or emergency, each person should have – per day – a minimum of 1 US quart (95% of one liter) of water; sick people, nursing mothers and children should be allocated more. 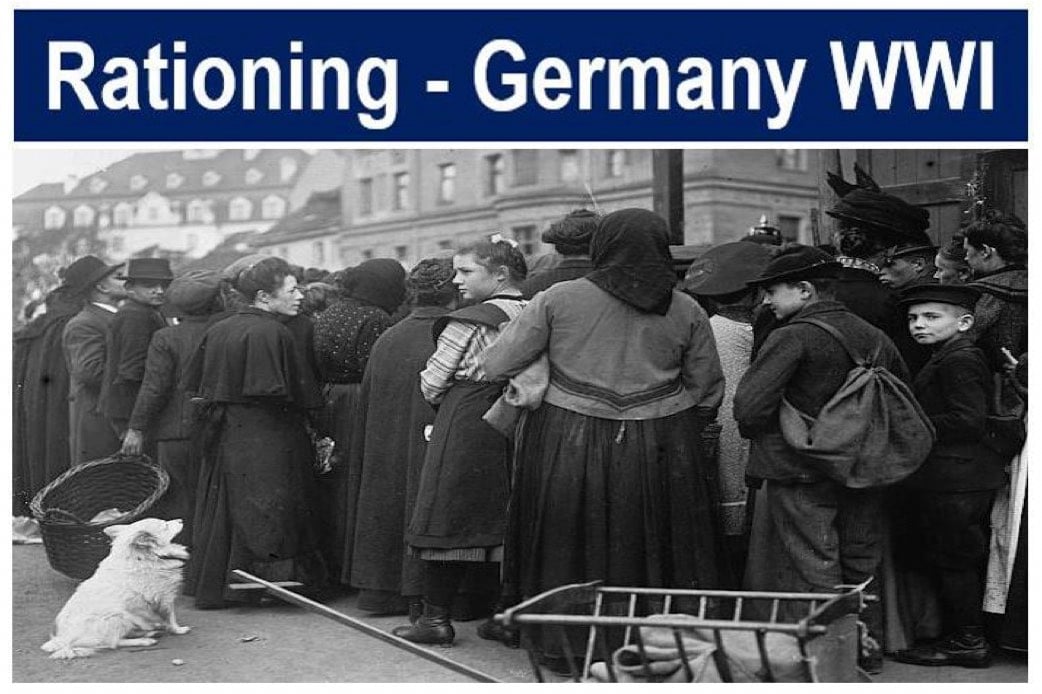 Germans waiting patiently in line for their food. The Allied naval blockade meant that food imports were scarce. All foodstuffs grown at home went first to Germany’s soldiers, while the rest was rationed to the civilian population. In 1917, when the entire potato crop failed, the food situation worsened significantly. (Image: historyplace.com)

During WWI (World War One), suffering the devastating effects of the British blockade, a rationing system was introduced in Germany in 1914. As the situation worsened over the years, Germany’s rationing system gradually expanded until it included every corner of the country and contained a comprehensive list of food and materials.

The United Kingdom did not suffer food shortages during WWI, because the sea lanes were maintained open for the importation of food. However, panic buying in 1918 prompted the rationing of sugar and later meat. Ironically, limiting how much sugar and red meat Britons were allowed to consume actually improved the overall physical health of the population.

On July 15th, 1918, ration books were introduced for sugar, meat, lard, margarine and butter. The average calorie-intake per adult in Britain during WWI only declined by 3%, but protein consumption went down by six percent.

Rationing during WWII (World War Two) was much more common than in the previous World War. Most European countries used redeemable coupons or stamps. Each family was issued a set number of each type of stamp based on the size of the household, income, and the ages of the children.

In the 1940s, the British Ministry of Food refined the rationing process to make sure that the population did not starve when food imports declined considerably and local production suffered because a large number of male workers had been called up to fight. Chemist-dietitian Elsie Widdowson (1906-2000), from the Department of Experimental Medicine, and Robert Alexander McCance (1898-1993), Professor of Experimental Medicine at the University of Cambridge, co-authored The Chemical Composition of Foods, which was first published in 1940 by the Medical Research Council. They had worked on the human body’s chemical composition and the nutritional value of various flours used to make bread.

Widdowson and McCance studied the different effects from deficiencies of water and salt, and produced the world’s first tables to compare different foods according to their nutritional content before and after cooking. They also studied the impact of a baby’s diet on human growth.

Widdowson’s and McCance’s book became the Dietician’s Bible and formed the basis for current nutritional thinking.

In 1939, Widdowson and McCance tested whether the British population could survive just on food produced at home, in case German U-boats managed one day to cut off all imports.

Using production data for 1938, they fed themselves and other volunteer-participants a diet limited just on foods grown at home, while at the same time simulating the physically-demanding wartime manual work that most adults would have to perform.

The researchers found that their and their fellow volunteers’ health and performance held out surprisingly well after three months.

The scientists also led the first-ever mandated addition of minerals and vitamins to food, starting with bread – which had calcium added to it. Their research became the basis for Minister of Food Lord Woolton’s wartime austerity diet. Left: An official US government propaganda urging citizens to accept the system of war rationing. Right: A war poster encouraging Americans to take their waste fats to their local meat dealer – the image poster was drawn by Henry Koerner in 1943 for the Office of War Information. (Images and Data: oll.libertyfund.org)

Fortunately, US imports of foods managed to successfully avoid the U-boats, so Briton’s wartime diet never needed to be as austere as in the Cambridge study. However, there was rationing, and the health of country’s population improved considerably – while life expectancy rose, infant mortality went down (without including deaths deaths from fighting in the war or enemy attacks).

During WWII, gasoline was the first commodity to be hit by rationing. Sugar, butter and bacon were added in January, 1940. Not long afterwards, dried fruit, canned fruit, milk lard, eggs, cheese, breakfast cereals, biscuits, jam, tea, and meat were added to the rationing list.

The Digging for Victory campaign led to millions of people growing their own vegetables.

Rationing did not include bread, however, until after the war was over. There was an outcry by housewives when the traditional white loaf was replaced with the national loaf of wholemeal bread.

Rationing never included fish in Briton during WWII, but its price increased considerably. In Venezuela, whose economy has collapsed due to a combination of government mismanagement, corruption and the nationalization of many sectors, rationing and standing in line for basic household items has become part of daily life. (Image: govtslaves.info)

Rationing in the USA – WWII

The US Office of Price Administration warned Americans of potential critical supplies, adding that rationing would be needed if the country entered the war.

After the attack on Pearl Harbor on December 7th, 1941, a rationing system was established. In June 1942, the Combined Food Board was established to coordinate the global supply of food to all the allies, with special attention on the flows from the United States and Canada to the United Kingdom.

Americans’ first experience of rationing occurred on May 4th, 1942, when the War Ration Book Number One, commonly known as the Sugar Book, was distributed through over 100,000 school teachers, PTA groups and other volunteer associations. There is one thing the Soviet Union and its satellite communist nations had in common, as well as Cuba and North Korea today – their citizens have to endure continuous shortages, conserve food and long lines when they go out shopping. (Image: Wikipedia)

Approximately 5,500 local ration boards were in charge of issuing ration books and exchanging used stamps for certificates – most of their employees were volunteers. The rationing of gasoline meant that all types of car racing, including the Indianapolis 500, were prohibited.

Rationing in the United States ended in 1946.

This Imperial War Museums video explains how British shopping habits changed when a system of rations was introduced during WWII.

Before the war, the country had been importing two-thirds of all its food. When war broke out, things changed considerably.