Real terms refers to a value that has been adjusted to take into account the effects of inflation. It contrasts with nominal value.

It is crucial that ‘ordinary’ investors fully understand the meaning of ‘real terms’ and ‘nominal value’. It is massively important, because inflation can considerably undermine the value of money over time – something that has major implications for wage negotiations, retirement planning, budgeting, and long-term investment plans.

If you see a text that says adjusted for inflation, it means the value of something in ‘real terms’. ‘Constant prices’ and ‘current prices’ mean the same as in real terms and nominal value respectively.

Imagine you were paid $20 per hour last year, and today your employer offers you a 10% increase – to $22 per hour. That is a ten percent increase in nominal value.

If inflation for the past 12 months stood at 10%, then that ten percent pay increase, in real terms, means that your income remains the same – you are no better off.

On the positive side, the ten percent pay rate per hour increase also means that your purchasing power has not fallen. However, it is important to consider things in ‘real terms’ when you make your spending plans for the year. 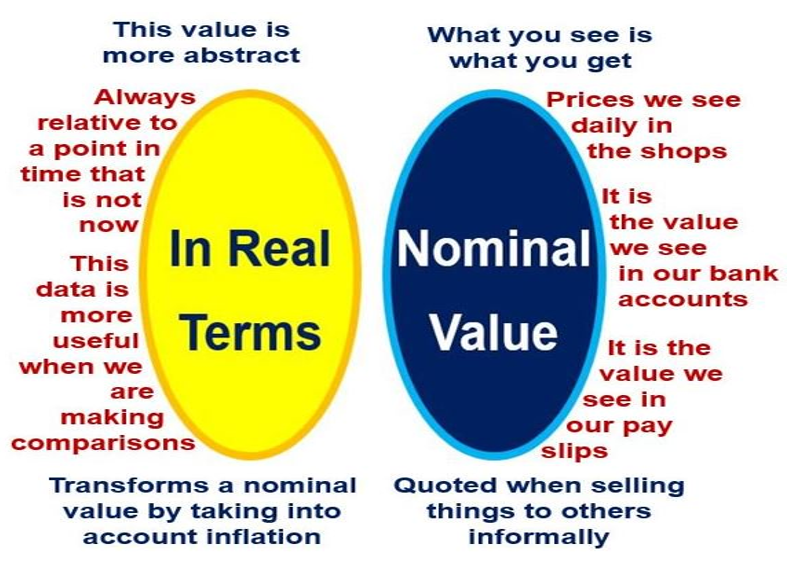 When quoting in nominal values, we are simply looking at the price of things in different points in time. When we quote them in real terms, we have adjusted for differences in the level of prices between those points in time.

When you are looking to invest your money into a savings account, you need to subtract the annual inflation rate from the annual interest rate that the financial institution is offering you. This image of the US Federal Minimum Wage since the 1930 tells us two quite different stories. Although nominally, people’s wages have increased over the past eighty years, in real terms we are still way below the peak reached in the 1960s. (Source of Data: economicfron.wordpress.com)

However, all they have told you is the nominal value of your increased savings. It does not necessarily mean that after a year you are 4% richer.

In order to find out what it is worth in real terms, you must subtract the annual inflation rate from the 4% interest rate.

Money illusion refers to our tendency to consider only the nominal value of something, rather than its ‘real value’ – what it is worth in ‘real terms’.

Irving Fisher (1867-1947), an American economist, statistician, progressive social campaigner, and inventor, coined the term ‘money illusion’ in Stabilizing the Dollar. In 1928, he wrote a book that focused on the subject – The Money Illusion.

We all fall into the money illusion trap sometimes. Employers have often managed to fool their employees into thinking that they have negotiated a good wage settlement in times of high inflation, when in fact, in real terms their income has declined.

Millions of employees today across the world are affected by money illusion. Most workers are happier to receive a 10% pay rise when inflation is at 10% than a 1% pay rise with inflation at 0%.

“We have standardized every other unit in commerce except the most important and universal unit of all, the unit of purchasing power. What business man would consent for a moment to make a contract in terms of yards of cloth or tons of cola, and leave the size of the yard or the ton to chance?”

Does this mean that Neverland’s GDP grew by 10% in one year? The answer is:

The only time nominal and real values are the same are when prices have not gone up or down – when annual inflation is zero.