Regional policy is the government’s policy to boost economic activity in a specific region of the country. In the case of the European Union, the term refers to a geographical area of the trading bloc. In most cases, the target of the regional policy is economically poorer than its neighbors. It might also be experiencing more problems.

The term may also refer to a policy of ensuring a fairly even spread of industry across different regions of a country or trading zone, in order to prevent or rectify economic decline. Additionally, a regional policy may try to address high levels of unemployment and lower-than-average per capita incomes.

This type of policy may include offering employers incentives to provide jobs locally, such as cheaper land and buildings. Grants, tax deductions, soft loans, and subsidized worker training are also examples of possible incentives. 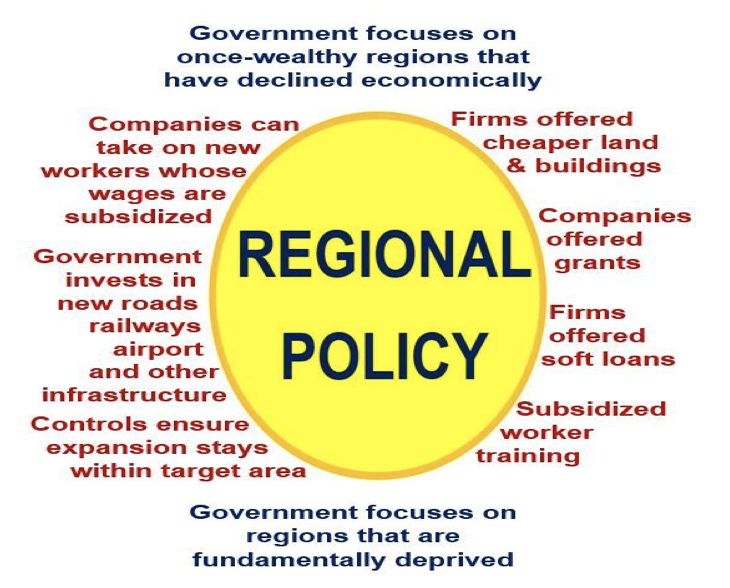 In the European Union, for example, Regional Policy has €351.8 billion, i.e., nearly one third of the EU’s total budget – set aside for Cohesion Policy for the 2014-2020 period.

Over the past couple of decades, the focus of regional policy has been the regeneration of economically-impoverished areas by encouraging new companies and industries to invest and locate there – this is known as the inward investment approach.

Most economically-impoverished regions in the advanced economies have become depressed because of industrial overspecialization.

For example, in South Wales and North East England, coal-mining used to employ a sizable proportion of the working population. Shipbuilding was also a huge employer

When coal gave way to other fuels and shipbuilding moved to South Korea and other parts of the world, the two regions suffered serious economic decline.

As vehicle manufacturing jobs moved to other parts of the world, Detroit has become a high-unemployment area.

These regions are not fundamentally disadvantaged. In the past, they used to be the powerhouses of the nation.

Regarding these regions, which are not fundamentally disadvantaged, FinancialDictionary.com writes:

“Accordingly, what is required is a diversification of the industrial base of such areas so as to provide new employment opportunities which, in turn, by increasing spending in the region, will help to create further jobs in, for example, local component suppliers, retailing and financial services.”

Companies get special offers to locate in specific areas. The offers may include rent relief, tax relief, investment grants. and retraining expenses. They may also include subsidized labor, and other financial assistance.

The controls aim to prevent factories and office buildings from expanding into non-deprived areas.

If the new industries do expand, these controls make sure they occur within the designated areas.

These investments are usually targeted at improving road and rail connections, telecommunications, local amenities, and other infrastructure items.

A major government investment, for example, might be for the expansion of an airport, or the construction of a brand new one.

The Tennessee Valley Authority (TVA) is probably one of the best examples of a successful regional policy. It has helped an enormous region of the United States for the best part of a century.

The TVA is a corporate agency in the US that provides electricity for corporate customers and local power distributors. It serves over nine million people in parts of seven states in the south-eastern region of the country.

The Authority derives virtually all of its revenues from selling electricity – it receives no money from the taxpayer.

As well as operating and investing revenues in its electric system, TVA provides navigation, land management and flood control for the Tennessee River System. It also helps local power generating and distributing companies and local and state governments with job creation and economic development.

The TVA emerged on May 18, 1933. With the US reeling from the Great Depression, President Roosevelt created his New Deal to help the country recover.

The TVA’s aim was to help the Tennessee Valley, which had suffered badly. The TVA had to improve the quality of life of the people in the region.

The TVA launched one of the biggest hydropower construction programs in American history.

The TVA subsequently became the largest electricity supplier in the country. New legislation in 1959 allowed the Authority’s power system to be self-financing.

In order to supply energy for the region that was undergoing a period of ‘unprecedented economic growth’, the TVA started building nuclear power stations to expand its capacity and spur innovation.

This was a difficult period for energy generators across the world, because of rapidly-rising fuel costs. In its website, the TVA writes:

“A difficult decade affected by rising fuel costs led to innovative thinking about energy conservation. Working successfully to stop a steady rise in energy costs, we paved the way for a long period of stable rates.”

This was a period of restructuring, which led to the unveiling of a new clean-air strategy.

Demand rose rapidly. The TVA turned its attention back to nuclear energy and got an idled reactor back into service. It also introduced the first green power program in the Southeast.

“We continue to carry out our mission of serving the people of the Tennessee Valley region, to make life better through our work in energy, the environment and economic development,” the TVA writes.

This Talk To EU video explains what its Cohesion Policy is. It also gives us examples of individuals across the European Union who have benefited.