What is the relative income hypothesis? Definition and meaning

The relative income hypothesis says that we care more about how much we earn and consume in relation to how other people around us do than our absolute well being, or our own earnings and consumption in isolation or in comparison to a moment in the past.

According to relative income supposition, a typical person is happier if he or she got a $100 weekly wage rise if others only got $50 than receiving a $150 increase while everybody else received the same increase.

People on lower incomes may consume more of their earnings than their better-off counterparts because they would like to reduce the gap in their standards of living – consumption levels.

James Duesenberry (1918-2009), an American economist who made a considerable contribution to the Keynesian analysis of income and employment, first set out the relative income conjecture in 1949 when his book – Income, Saving and the Theory of Consumer Behavior – was published.

According to Duesenberry, the weekly consumption of a household depends in part on its income relative to other families. 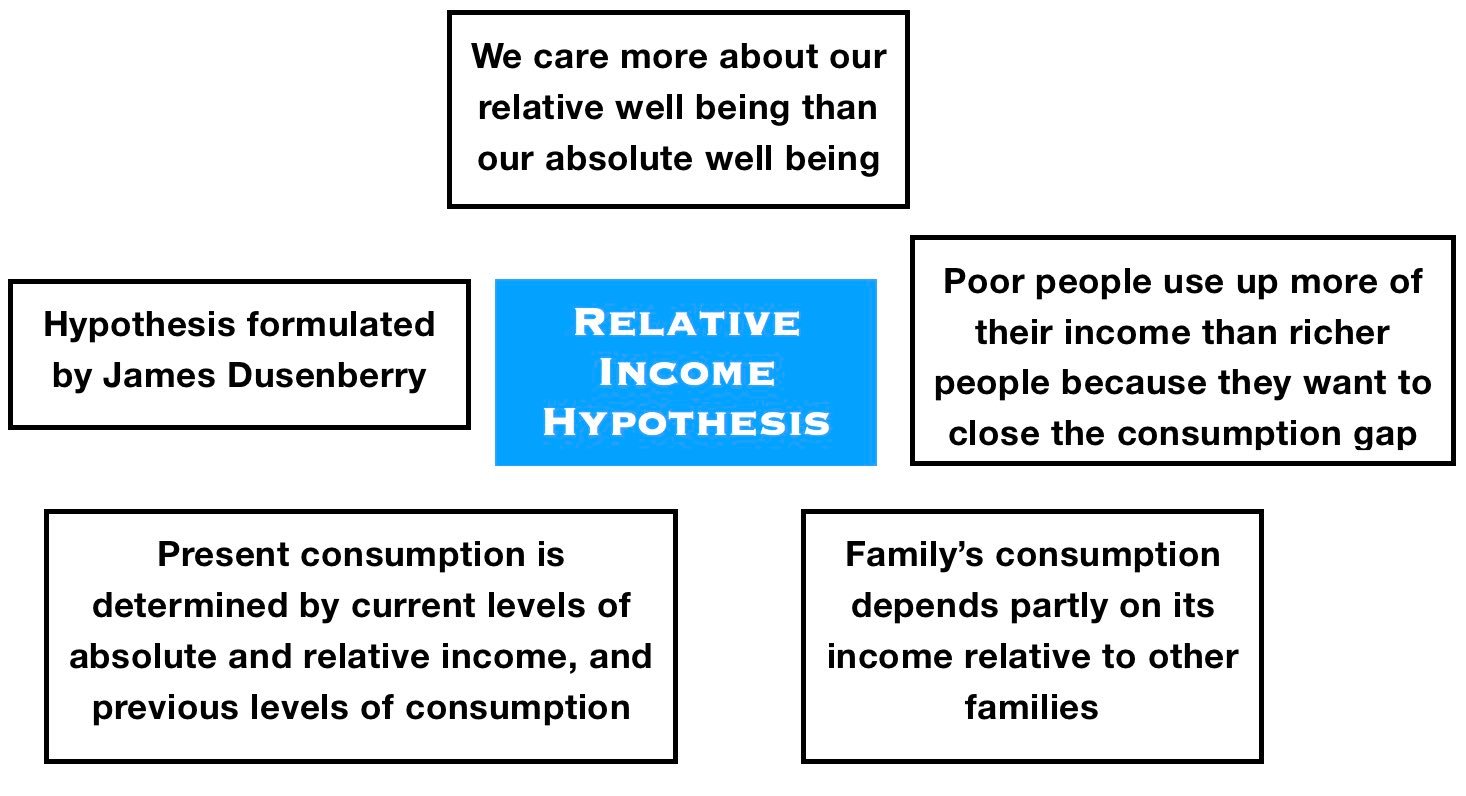 According to the International encyclopedia of the Social Sciences: “Relative income hypothesis states that the satisfaction (or utility) an individual derives from a given consumption level depends on its relative magnitude in the society (e.g., relative to the average consumption) rather than its absolute level.”

There are several versions of this hypothesis. The one formulated by Duesenberry has received the most attention, and is the main focus of this article.

Supporters of the relative income hypothesis say that current consumption is not influenced just by current levels of relative and absolute income, but also by levels of consumption reached in previous period. As soon as a household reaches a level of consumption, it is difficult for it to consume less afterwards.

In other words, the relative income rationale has three components:

Relative income hypothesis contrasts with Permanent Income Hypothesis, a consumer spending theory which states that we will spend money at a level that is consistent with our expected long-term average income.

Our level of expected long-term income is then thought of as our level of ‘permanent’ income that can be spent safely.

Other hypotheses that followed Duesenberry’s relative income hypothesis, including the permanent income hypothesis, were also able to explain why rich households tended to save more than those further down the socioeconomic ladder – and in a less controversial way.

In an article published in the Quarterly Journal of Business and Economics – ‘The Relative Income Hypothesis: A Review of the Cross Section Evidence’ – George Kosicki wrote:

“Early models of household saving postulated that poor households acted in a way fundamentally diffrent from rich households. Duesenberry argues that effects in consumption weighed less heavily on rich households, and so savings rates should rise with position in the income distribution.”

“Although Duesenberry’s relative income hypothesis held up well under cross section empirical tests, it was supplanted by the life cycle and permanent income models that followed.”

“These models seemed capable of explaining the same empirical evidence in a less controversial manner.”

Imagine two people, one earns $100,000 per year and the other $50,000 – this information is on their absolute incomes; one earns twice as much as the other.