What is return on capital? Definition and meaniing

Return on capital (ROC), also known as return on invested capital or return on total capital, refers to the profit on an investment in relation to how much was invested. It is a ratio used in accounting, finance and valuation that shows how effective a company has been at turning capital into profits.

The calculation is made as follows:

The Khan Academy advises lay investors (who are not accountancy experts) to calculate ROC as follows (see video below):

Return on capital is a useful measure for comparing the relative profitability of businesses after factoring in how much capital was used. It is therefore of interest especially for shareholders and bondholders. 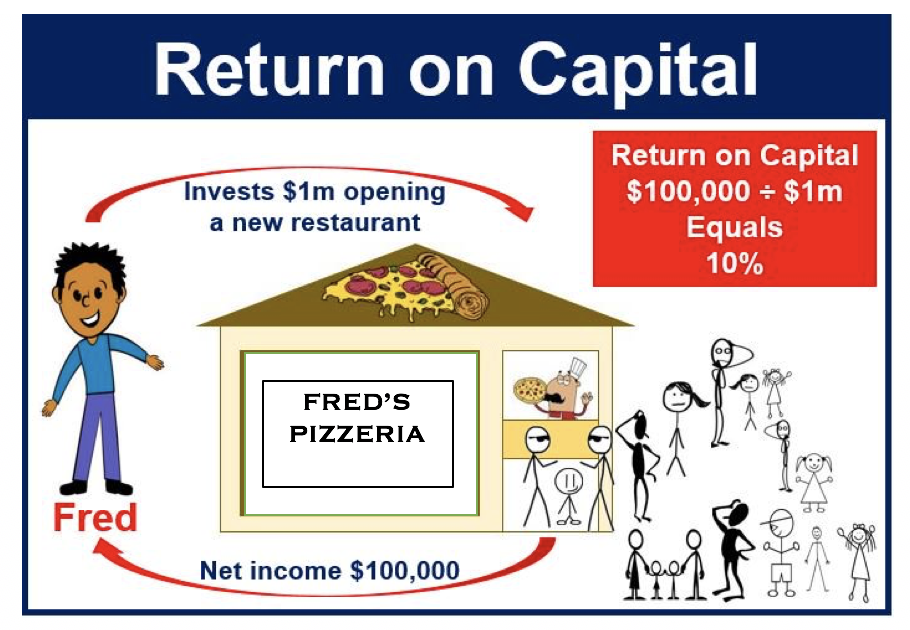 Fred has managed to get a return on capital of 10% from his pizza restaurant business.

Calculating return on capital can give us the big picture on what something is worth, whether we should invest money in something, and how different options weigh against each other, such as placing one’s money in the bank, buying a house, buying bonds, paying off credit card debts, etc.

Example of return on capital

We can calculate John Doe’s return on capital as follows:

ROI is most useful when trying to calculate the returns generated just from the business operation itself, rather than short-lived results from one-time events.

It is an even more useful measure when assessing companies that invest large amounts of capital, like oil & gas businesses, big box stores, and computer hardware firms. Investors need to know whether they are getting a decent return on their investment.

According to ft.com/lexicon, return on capital is:

“The profit on an investment in relation to the amount invested.”