What is scarcity? Definition and meaning

Scarcity or paucity in economics refers to limitation – limited supplies, components, raw materials, and goods – in an environment with unlimited human wants. It is the fundamental economic problem of having what appears to be limitless human wants in a world with limited resources.

Scarcity is one of the economic assumptions that economists make. The others are self-interest, trade-offs, costs and benefits, and models and graphs.

Determining how to make the best use of scarce resources is fundamental to economics. The factors of production are not limitless, i.e., there is scarcity. Therefore, we must make choices about how best to use them. This is where economics comes in.

In the world of economics, we have to learn to live with one basic problem: the gap between scarcity – limited resources – and unlimited wants. In order to satisfy those wants, suppliers need to determine how to use those limited resources carefully.

Scarcity is a fundamental part of economics. It is all about using the resources we have, i.e., the factors of production – which are limited. Using them, that is, to try to satisfy our seemingly unlimited wants.

British economist Lionel Charles Robbins (1898-1984), known for his leadership of the London School of Economics, is famous among economists today for his definition of economics, which he laid out in his 1932 Essay on the Nature and Significance of Economic Science:

“Economics is the science which studies human behavior as a relationship between ends and scarce means which have alternative uses.” 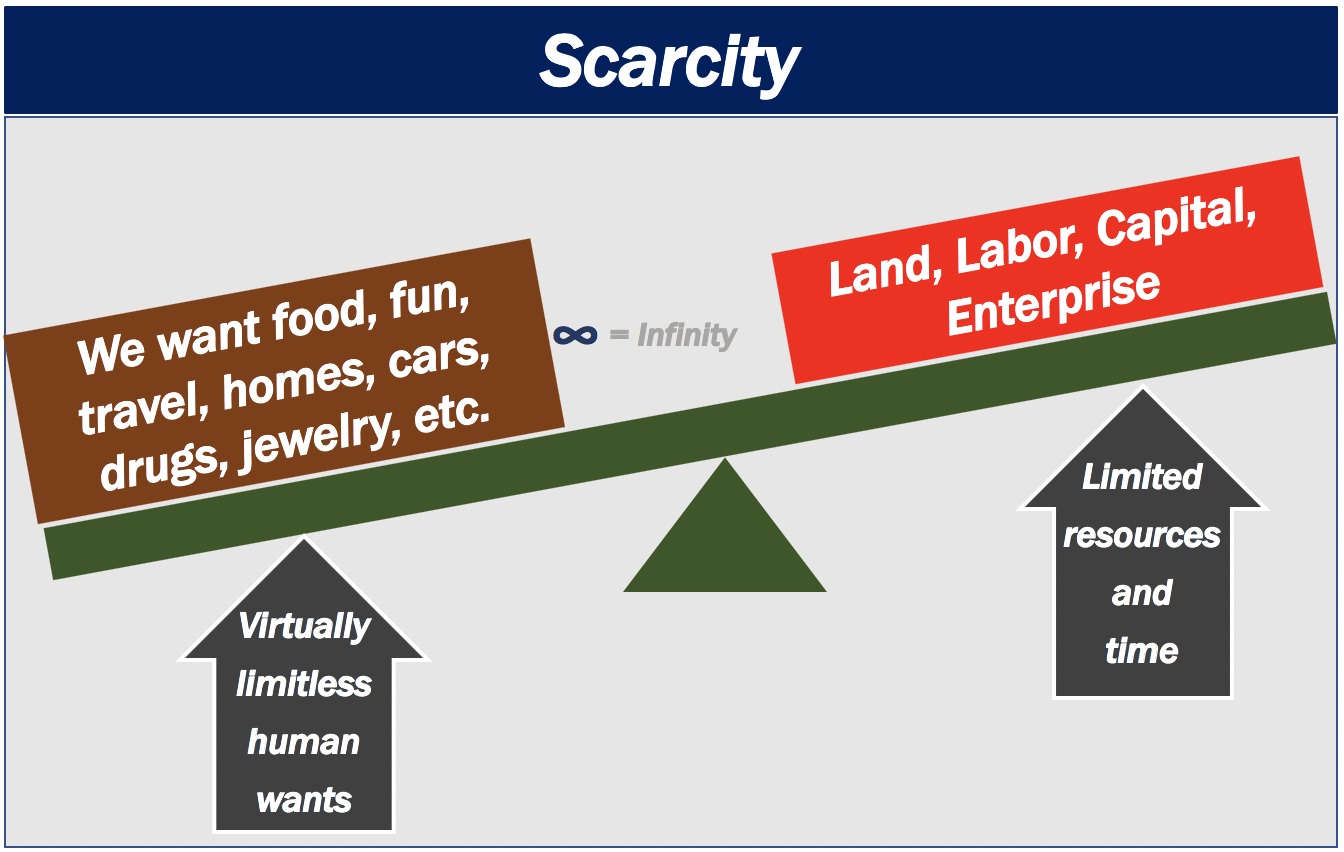 No scarcity = no economics

Imagine a world with no scarcity, i.e., a land of plenty. Imagine that everything, even time, metals, minerals, raw materials, money was limitless.

In such a world, economists would have absolutely nothing to study. Nobody would have to think carefully about how to allocate resources. Also, there would be no trade-offs to consider or quantify.

The world we live in, however, is not like that. Absolutely everything around us costs something, because every single resource is scarce to some degree.

“Market forces operating through the price mechanism usually offer the most efficient way to allocate scarce resources, with government planning playing at most a minor role. Scarcity does not imply poverty.”

“In economic terms, it means simply that needs and wants exceed the resources available to meet them, which is as common in rich countries as in poor ones.”

The concept of scarcity is that there is never enough of something to satisfy all our conceivable wants. Even in the super-advanced economies with state-of-the-art technologies, there isn’t enough.

When there is scarcity we must make sacrifices, i.e., we must give something up or make a trade-off. That is, if we want to obtain more of the scarce resource that is sought after.

In our world, the condition of scarcity necessitates competition for scarce resources. In the book – The Economic Way of Thinking – authors Paul Heyne, Peter J. Boettke and David L. Prychitko wrote:

“[Competition occurs] when people strive to meet the criteria that are being used to determine who gets what.”

One of the ways we allocate scarce resources is through market prices or the price system.

In the same book, Heyne, Boettke and Prychitko also wrote:

“If a society coordinates economic plans on the basis of willingness to pay money, members of that society will [strive to compete] to make money.”

Etymology of scarce and scarcity

Etymology is the study of the origin of words and how their meanings have changed.

According to the Online Etymology Dictionary, the English word ‘scarce’ first appeared in thirteenth-century Britain with the meaning ‘restricted in quantity.’ It came from Old North French scars, meaning ‘scanty, scarce.’

The opposite of scarcity, i.e., when there is an oversupply, is a glut.