What is standard of living? Definition and examples

The term Standard of Living refers to how well people live in a town, region, country, or larger part of the world, including the whole globe. In social science and economics, it is the level of comfort, wealth, material goods, and other necessities that are available to people in a specific area or time. 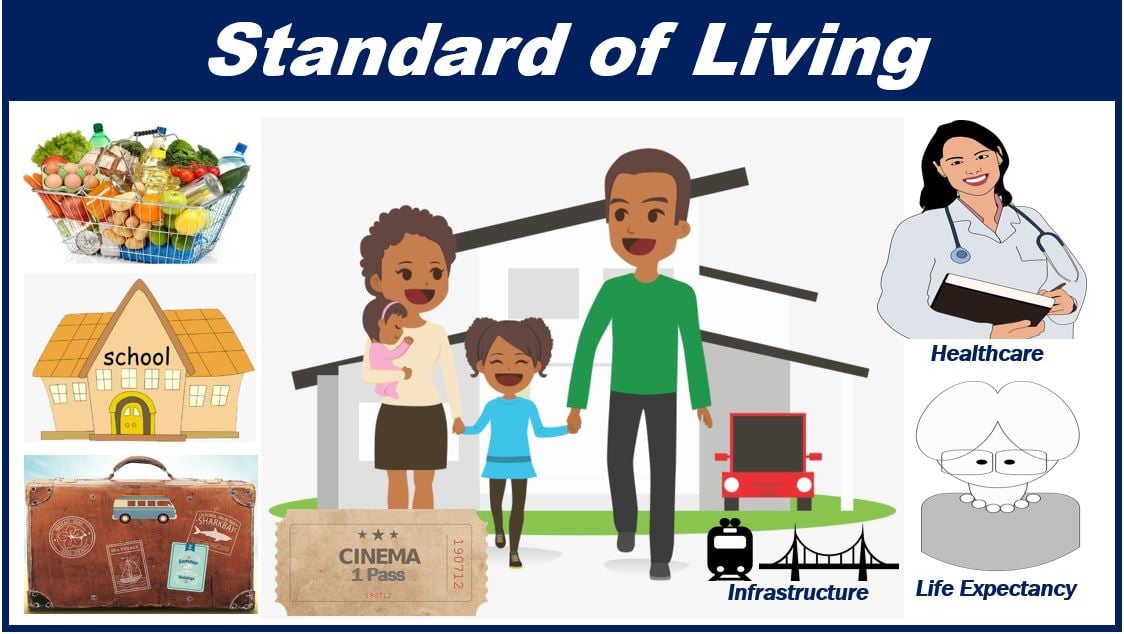 Many economic, health, and socioeconomic factors make up this measurement, including:

The term can have different meanings for different people, depending on whether you are an economist, sociologist, healthcare expert, lay person, etc. This article focuses mainly on its meaning in the world of economics.

Investopedia.com has the following meaning of the term:

Standard of living vs. cost of living

Some people mistakenly use the two terms with the same meaning. They are, in fact, completely different.

The cost of living reflects how much money individuals require to live. Specifically, how much they need to buy their groceries, clothing, gasoline, cars or pay for public transport (or both), pay their utilities, cover healthcare costs, school/university fees, housing, and other basic survival items.

Sometimes this measure also includes luxuries such as going out of town or abroad on vacation, eating out, entertainment, Christmas/birthday presents, etc.

In the State of New York, USA, for example, the cost of living in New York City is considerably higher than in Buffalo. People in NY City need to spend significantly more to maintain an average quality of life compared to their counterparts in Buffalo.

A country’s standard of living tells us how well or badly its citizens live. It is an indication of their overall wealth, material properties, healthcare access, general physical and mental health, education, and their ability to pay for necessities as well as luxuries.

Policymakers, economist, sociologists, and journalists use both measurements to make comparisons between different locations. They also use them to compare one period with another in the same location.

Standard of living vs. quality of life

See below what thebalance.com says about the two terms:

GDP per capita is the generally accepted standard of living measure. The letters GDP stand for gross domestic product. GDP per capita is an economy’s GDP divided by its total population. A country’s GDP represents everything it produces, including all goods and services, in one year.

A touchy subject – it depends on who you ask

According to a report by the Federal Reserve Bank of Boston (PDF), standard of living is often a touchy subject. An economist may try to convince a group of people that they are better off than they believe they are, and they will give several reasons why this is not the case.

Another group may disagree with an economist when told that their standard of living is lower than the national average, and may provide compelling evidence. They may point to their super-low crime rate, clean streets, excellent schools, and strong sense of community.

Productivity and standard of living

The Boston Federal Reserve Bank made the following comment:

“We tend to equate a higher standard of living with a higher level of consumption, but the key to long-term prosperity is productivity. Increased productivity is what makes increased consumption possible.”

Productivity measures how much a unit of input produces. For example, how many tables a worker produces per week in a furniture factory. Productivity may refer to labor or capital.