What are sticky prices? Definition and meaning

Sticky prices, price stickiness or normal rigidity, are prices that are resistant to change. They do not go up or down as soon as demand rises or falls. Neither do they fluctuate as production costs change, i.e., at least not as rapidly as other goods do.

Most products and services will respond to the laws of supply and demand. In other words, when demand goes up so do prices, when it falls prices decline as well. However, with certain goods and services, this does not always happen.

The notion of sticky prices means that the prices of goods and services do not change. They remain steady even when you would think they should change.

The price of buying one dollar with another currency changes rapidly. In fact, it changes by the minute. Exchanges rates belong to the flexible prices category, i.e.,  the opposite of sticky prices.

We do not see the price of gas (British English: petrol) going up or down as quickly as currencies. However, any change in global oil prices becomes apparent at our filling stations within days.

Standard hotel rates, on the other hand, generally remain steady for months. The same also happens with flight and vacation prices.

With sticky prices, there is often a temporary disequilibrium in the market.

In some sectors – such as the financial markets – a small disequilibrium can have huge and devastating consequences.

In others, on the other hand,such as hotel rooms, tiny disequilibria do not matter so much.

Therefore, hotels have sticky prices while the financial markets have flexible prices. In economics, menu costs are the costs to a company resulting from changing its prices. The term originates from the cost of restaurants literally having to print new menus. Businesses with high ‘menu costs’ tend to have sticky prices.

According to BusinessDictionary.com, price stickiness is a:

“Tendency of prices to remain constant despite changes in the cost of producing and selling a product. For example, prices may remain sticky if businesses are concerned about losing customers in highly competitive markets.”

“Prices may be ‘sticky up’ or ‘sticky down’ if they move up or down with little resistance, but do not move easily in the opposite direction.”

A company may decide to keep prices unchanged because of the high costs involved – printing new brochures and menus, re-filming TV adverts that mention the price, etc. – of doing so.

Imagine you own a restaurant and you see a general rise in the cost of your ingredients. In the majority of cases, a company with higher costs would immediately raise prices. 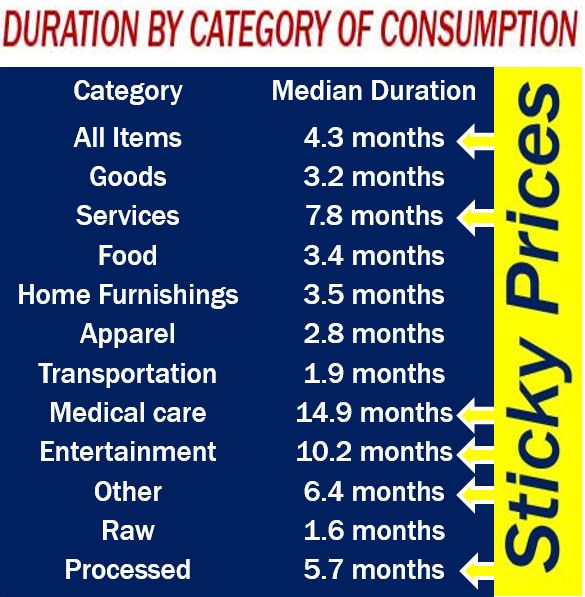 According to the Federal Reserve Bank of Minneapolis: “Looking at six broad expenditure categories used by the BLS (Bureau of Labor Statistics), they find that transportation prices (new cars and air fares, for example) are quite flexible – changing every 1.9 months—while medical care (drugs and doctors’ services) and entertainment (movie tickets, newspapers and books) change prices rarely, every 14.9 months and every 10.2 months, respectively.” Sticky prices are the ones that take longer to change.

However, in your case, you may have just finished printing your new menu, and an advertising campaign may be underway. Reprinting menus, pulling down some large billboards across town (without any refund), and canceling a series of local TV ads that cost you a lot of money to produce, would be more harmful for your business than leaving your prices unchanged – therefore, you opt for sticky prices.

In such cases, the company will only change its prices when the cost of keeping them the same becomes greater than the cost of adjusting them.

If you are one of several competitors in a market, and you are worried that your rivals might not raise prices when a vital raw material becomes more expensive, you may decide to stay put and wait.

A common reason for prices to remain the same, even when it would seem that the logical move would be to raise them, are long-term contracts.

If you have a 1-year contract to supply, for example, hotel rooms to a vacation company at a certain price, there is nothing you can do.

Even if your government raises taxes or does something to eat into your profit margin.

Time dependent is when companies alter prices after a period of time. They decide to change prices independently of what happens in their economic environment.

In time-dependent models, price changes are staggered exogenously, so a fixed proportion of companies change their sticky prices at a given time. We do not know which companies change prices.

In state dependent cases, companies choose to change prices in response to changes in the economic environment.

In such models, business enterprises evaluate market conditions and then determine how to respond.

The economic environment refers to economic factors that influence how consumers and companies behave.

In state-dependent models, the decision to alter prices is based on market changes – it is not related to the passage of time.

The majority of models relate the decision to change prices to menu costs – the company changes its sticky prices when the benefit of changing them becomes greater than the menu costs.

Price changes, in state-dependent models, may be staggered over time or bunched. Prices change more rapidly and monetary shocks are over more quickly under state dependent than time models.

Video – What are sticky prices?