What is a subsidy? Definition and meaning

A subsidy is a quantity of money given directly to companies, organizations, or individuals by the taxpayer (government). Subsidies aim to encourage production, boost exports, promote research, prevent a business from collapsing, or reduce unemployment. They are also introduced to make the price of a product more affordable to consumers.

A subsidy may consist of financial assistance to help producers of something compete more effectively in the marketplace. In this context, the term ‘marketplace‘ means the same as ‘market‘ in its abstract sense.

The most basic form of subsidy is a cash payment or grant. Grants generally refer to time-limited payments that are linked to specific investments.

Grants may also enable a company to cover all or part of its general costs. Some grants target specific activities, such as research.

The word ‘subsidy’ comes under the umbrella term ‘financial assistance.’

According to Oxford Dictionaries, a subsidy is:

“1. A sum of money granted by the state or a public body to help an industry or business keep the price of a commodity or service low.”

“2. A sum of money granted to support an undertaking held to be in the public interest. 3. A grant or contribution of money.”

The Mexican Government, for example, subsidized corn tortillas for 25 years. Tortillas are to Mexicans what rice is to the Chinese, potatoes to the British, or baguettes to Parisians.

In 1999, the subsidies ended. There was subsequently an angry backlash, particularly among impoverished Mexicans who relied on the staple food. 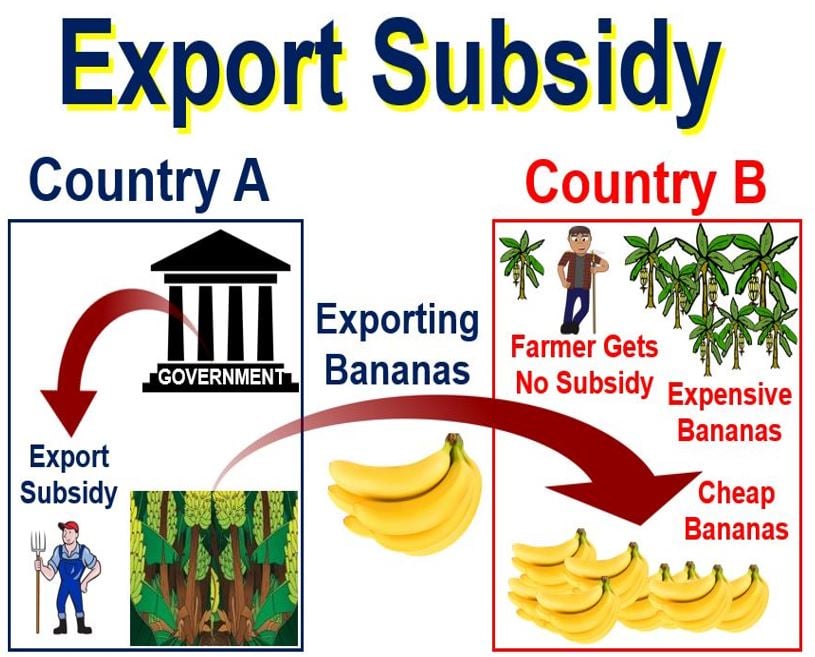 Export subsidies consist of financial support from the taxpayer for goods that are sold abroad, i.e., exported. Hopefully, the subsidies will improve the country’s balance of payments.

According to many economists, subsidies may benefit consumers because they pay less than the market price. However, they also hurt the subsidizing nations.

China’s extensive export subsidies have helped give the country an advantage in sectors where they previously had no comparative advantage.

Recently, investigative journalists have shown that export subsidy abuse in China is damaging the country.

Employment subsidies or wage subsidies act as incentives to get employers to provide more job opportunities. This subsequently reduces unemployment.

The taxpayer provides assistance with wages. In Australia, for example, wage subsidies are made available to employers who take on eligible job seekers.

According to Australia’s Department of Employment:

“Wage subsidies can help employers to expand their business and employ new staff, which will help boost the economy and create more jobs.”

They also help create more wealth by getting people to work and business appointments more rapidly.

European Union railways absorb €36 billion of public subsidies annually.  According to the European Commission, €36 billion is nearly as much as they earn from fares.

China is a massive investor and subsidizer of rail transport and infrastructure. In 2015, China invested more than $128 billion in domestic railway construction.

Some governments see airport subsidies as unfair because they distort the free-market, level playing field.

The EU criticizes Germany for its high number of subsidized (loss-making) airports, which low-cost carriers use.

In many countries, roads and highways (UK: motorways) are paid for fully by the government rather than tolls.

German railway operators say it is unfair that long-distance bus services pay no tolls. German railway companies, on the other hand, have to pay track access charges.

Many governments give subsidies to farmers to supplement their income and influence the cost and supply of agricultural commodities.

While farmers think these financial incentives are great, many people criticize them.

In fact, the agricultural subsidies in the United States, Canada, the European Union, and Japan are bad for farmers in developing countries.

Farmers in developing nations eventually abandon their farms and move into cities. Many of them migrate to the advanced economies to find work, some economists claim.