What is a takeover? Definition and meaning

A takeover or acquisition is the purchase of one company by another. We call the purchaser the bidder or acquirer, while the company it wants to buy is the target. It is a type of merger, but not of equals. In the case of an acquisition, there is a predator and a prey.

A takeover may also refer to the acquisition or colonization of a country. This article focuses on the word’s meaning in the world of business.

There are different types of takeovers, including friendly, hostile, and backflip ones. There are also reverse ones.

As the name suggests, a friendly takeover occurs when the target company is happy about the arrangement. In other words, its directors and shareholders have approved the offer.

The bidder tells the target’s board of directors about its intention and makes an offer.The board then advises its shareholders to accept the offer. Subsequently, the friendly takeover goes ahead. 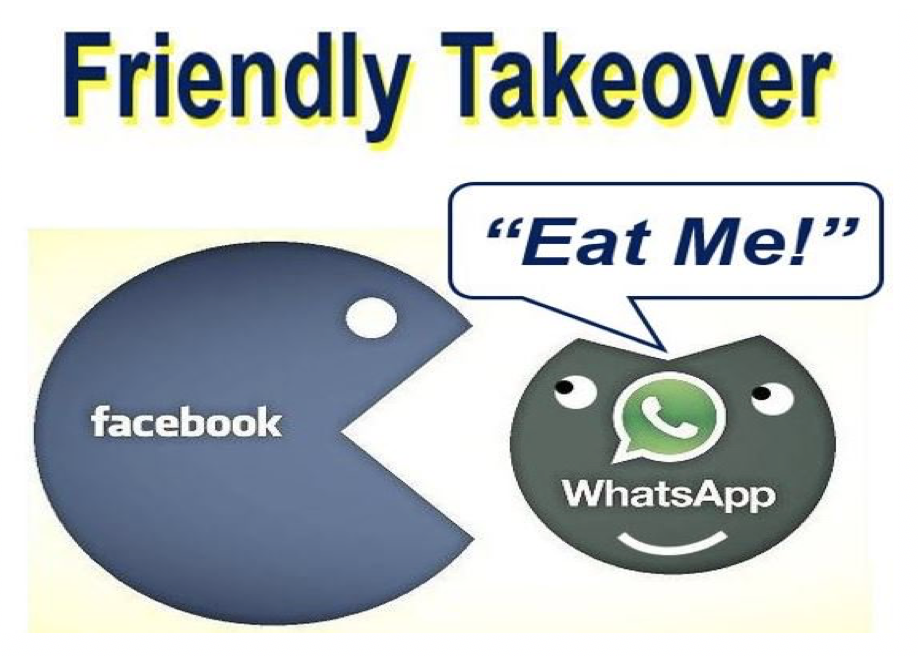 A friendly takeover is an acquisition where the owners of both companies agree to the terms of the transaction.

In the majority of private companies, takeovers tend to be friendly. This is because the board members are usually the main shareholders.

In a hostile takeover situation, the target company does not want the bidder to acquire it. This can only really happen in a publicly-listed company because the directors are not typically majority shareholders.

The bidder does not back always off if the board of a publicly-listed company rejects the offer. If the bidder still pursues the acquisition, it becomes a hostile takeover situation.

Sometimes there may also be a hostile takeover situation if the bidder announces its firm intention to make an offer, and then immediately makes the offer directly – thus, not giving the board time to get organized.

If the bidder can divide board and or shareholder opinion, it has a better chance of succeeding. There are five different ways that a hostile takeover situation can play out.

The bidder may make a public offer at a fixed price above the current market price. In other words, it offers more per share than its current stock market value. We call this a tender offer.

In the United States, bidders must include comprehensive details of a tender offer in their filing to the SEC. SEC stands for the Securities and Exchange Commission. It must also provide the target company with details regarding its tender offer.

The filing must include data on the bidder’s plans for the company after it has acquired it. It must also reveal its cash source and offer terms.

The bidder can also engage in a proxy fight. In a proxy fight, it tries to persuade enough the majority of stockholders to replace the whole management. It may target just  some key members. Put simply; the hostile bidder tries to get more acquisition-friendly people on the board.

Alternatively, the hostile bidder may discreetly buy enough stocks of the company in the open market. We call this a creeping offer. Eventually, it has enough shares to effect a change in management.

In all successful hostile takeovers, the management tries to resist the acquisition, but eventually fails.

It is harder for the bidder to conduct extensive due diligence if the target is resisting the acquisition attempt. Therefore, hostile takeovers generally carry more risk for the bidder than friendly ones. Due diligence refers to carrying out a thorough examination of the other party’s financial and operational status and history.

If the bidder requires loans in order to purchase the target company, it will have a serous problem. How can it convince the bank to lend the money if it cannot conduct extensive due diligence?

A famous hostile takeover was AOL’s acquisition of Time Warner Time Warner was considerably bigger than AOL. In 2000, it was hailed the deal of the millennium.

However, the new AOL Time Warner company lost over $200 billion in value in less than two years. The huge loss occurred after the dotcom bubble burst.

A common strategy for the target company is to make itself less attractive to the hostile bidder. It may deliberately increase its debts or sell its best assets. Additionally, it may acquire assets the hostile bidder does not like. We call this a Kamikaze defense strategy.

A reverse takeover occurs when a private company purchases a publicly-listed company.

In fact, it is an effective way for the private company to ‘float’ itself. In other words, it can go public without all the IPO expense and time. IPO stands for Initial Public Offering.

This occurs when the acquiring company becomes a subsidiary of the company it purchases.

Imagine your company is called John Doe Inc. It has lots of money but very few people globally know it exists. You hear that BaliBubu Plc is in financial trouble. It is also a company with products that are famous all over the world.

If you acquire it, you will probably drop the John Doe name and continue with BaliBubu.

According to lexicon.ft.com, a takeover is:

“The acquisition of a majority or controlling interest in a company, normally through the purchase of shares. A takeover may be friendly or hostile. Depending on how many shares a potential acquirer buys in the market, a formal offer to other shareholders may be required under stock exchange regulations.”

“If this potential acquirer (see raider) makes a hostile takeover bid, the takeover target (also called target company) could put into effect a variety of strategies aimed at fending off the attempt.”

As a noun, the term is one word – takeover. However, as a verb it is two words – to take over. As in:

– Verb: “John Smith took over the responsibilities of marketing after the death of our Marketing Director.”

–  Noun: “The takeover of John Doe Inc. by Bulan Ltd was finally completed.”

“Experience tells us that we do not need more overspending or higher taxes to grow jobs. We do not need more regulations or more government control – such as the government takeover of health care or the restrictions in domestic energy production,”
(Timothy Lee ‘Tim’ Walberg – an American politician and former pastor).

“It’s interesting to see what people are saying about me. I like keep up with the latest rumors! A while back there was a rumor that I was going to do a film with Demi Moore about the takeover of Commodore computers.”
(Warwick Davis – a British actor, television presenter, writer, director, producer and comedian).

“The corporate system dictates what gets made, and the movies are so bad because of the economic structure of Hollywood. The big business takeover of Hollywood is at fault rather than American storytellers – it’s what keeps textured movies from getting made,”
(James Gray – an American film director and screenwriter).

“When bureaucrats talk about increasing our ‘access’ to x, y or z, what they’re really talking about is increasing exponentially their control over our lives. As it is with the government health care takeover, so it is with the newly approved government plan to ‘increase’ Internet ‘access’.”
(Michelle Malkin – an American conservative blogger, political commentator, and author).

A merger is a fusion of two consenting companies. It is a marriage. A merger creates a new legal entity.

In a takeover, one eats the other. Afterward, the target company (usually) ceases to exist as a legal entity, unless it is a reverse takeover.

This Marketplace APM video explains what happens when companies don’t agree and the takeover goes hostile.