Text and texting: Definition and examples

The word text has a long-established and a modern definition. For centuries, the term has meant an extract, passage, or body of writing, either handwritten or printed. The modern form refers to short messages that people send and receive on their cell phones. Texting is the activity of sending such messages.

This article focuses on the modern meaning of the term. This can take the form of a verb or a noun. 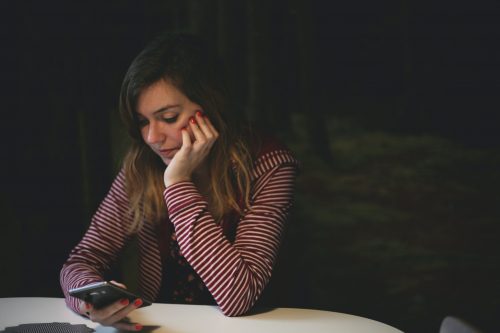 Texting is a quick and easy method of communication. Image: Kev Costello on Unsplash.

Merriam Webster define the verb to text as “to send a text message from one cell phone to another,” or “to communicate by text messaging.” The noun form refers to the message itself, as in “he sent me a text.”

There is also an adjective form, as in “text message” or “text editor”. The latter is a computer program that carries out basic word processing. Notepad, for example, is a simple text editor that Microsoft include with their Windows operating systems.

How texting has evolved

Texting began in the 1980s, with the development of Short Messaging Service (SMS) for cell phones.

Using SMS, cell phone users can text up to 160 alphanumeric characters in a message. If the message exceeds this limit, it breaks up into separate texts.

Nowadays, application programs – or apps – like Facebook Messenger, SnapChat, and WhatsApp also allow users to text. An advantage that these social messaging apps have over SMS is that they use encryption. Without encryption, messaging services can read messages, and so can anyone who intercepts them.

The multiplicity of digital platforms that use texting has led to increased sophistication among users.

For instance, a 2010 Nokia study found that texters with many contacts often carry on several conversations at the same time. It also showed that such users often employ text messaging to switch between a variety of communication services.

Texting as a marketing tool

Businesses are increasingly making use of text messages as marketing tools. Research suggests that SMS open rates are 90% and higher around the world. This compares very favorably with open rates for marketing emails, which sit at around the 20% mark.

Digital marketing advisers, however, suggest that it is not a case of whether SMS is more effective than email, but of making the best of both. Each method has its place. Campaign Monitor, for instance, suggest that SMS texts can be useful for:

Other uses of text messaging

Government and business organizations also send text messages for purposes other than marketing. The channel offers a fast way to communicate directly with individuals. The following list, while not exhaustive, indicates the wide range of applications: