What is time value of money? Definition and examples

Time Value of Money (TVM), also known as present discounted value, refers to the notion that money available now is worth more than the same amount in the future, because of its ability to grow.

The term is similar to the concept of ‘time is money’, in the sense of the money itself, rather than one’s own time that is invested. As long as money can earn interest (which it can), it is worth more the sooner you get it.

We all know that if we deposit money in a savings account, it will earn interest. That is why we prefer receiving money now than the same amount at a future date.

Time Value of Money is important in financial management. TVM can be used to compare different investment options and to solve problems involving mortgages, leases, loans, savings and annuities. 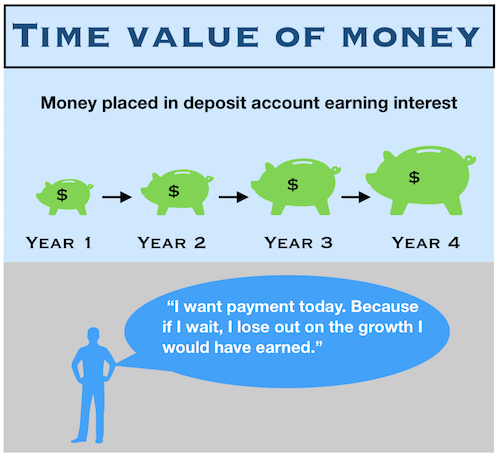 If you wait one year to get your money, you are losing out on the opportunity to have that money in the bank now earning interest.

Example of Time Value of Money

Imagine you lent a friend $1,000 and he paid you back today. You immediately deposit that money into an account that earns 7% annually. It will be worth $1,070 in exactly one year’s time.

If you asked people whether they would prefer to receive $1,000 now or that amount in one year’s time, they would probably all say they wanted it now, for several reasons:

A key concept of TVM is that a series of equally, evenly-spaced instalment payments or a single lump sum, or receipts of future pledged payments can be converted to an equivalent value now.

One may also determine the whole thing the other way round, the value to which one single sum or a series of future payments will have appreciated at a future date.

Video – What is Time Value of Money?