What is a unicorn company? Definition and meaning

A unicorn company is a startup company that is worth more than $1 billion. The term became popular a few years ago. The vast majority of products that unicorns make are software, while a sizable minority make hardware.

We also refer to these companies as ‘unicorn startups‘ or simply ‘unicorns.’

Wikipedia has the following definition of the term:

“A unicorn is a privately held startup company valued at over $1 billion.”

Unicorns contrast with decacorns and hectocorns which are worth more than $10 billion and $100 billion respectively.

TechCrunch says that in March 2018, there were 279 unicorn companies.

The largest unicorns in 2018 are Uber, Airbnb, Palantir, Pinterest, and Xiaomi. 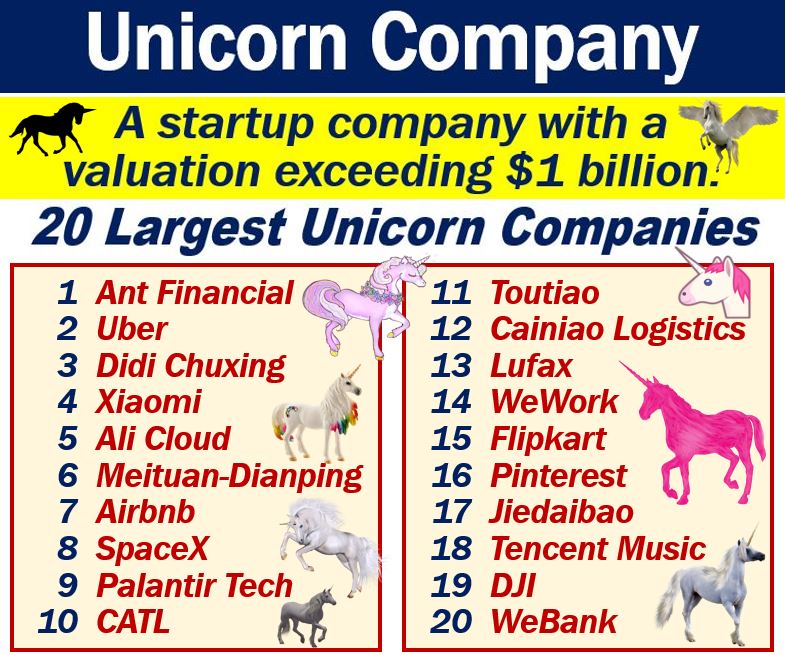 The number of startups joining the unicorn club each year is growing rapidly. How long will this continue before a giant bubble bursts? (Source: Wikipedia)

The number of unicorns in the world is growing progressively faster each year.

When Aileen Lee first coined the term in 2013, there were just thirty-nine of them. Now, there are more than five times that number.

Harvard Business Review published a study on unicorns by Play Bigger, a Silicon Valley consultancy. The study found that growth in startup valuations was staggering.

A valuation is an estimate of how much something is worth, such as a property, business, antique, or financial asset. In this article, it refers to estimating the value of a company.

“Products and services get discovered and adopted at a speed never seen before. Word of mouth today – through Facebook, Twitter, Tumblr, Pinterest, and so on – is just so fast, and it’s the most effective means of marketing.”

Ramadan added that the launch of the iPhone eleven years ago opened up opportunities for products and services. It also created a new way to distribute software rapidly.

The valuations of unicorns are very different from valuations people carry out the traditional way.

Traditionally, we have valued companies according to their track records, i.e., past years’ performances.

With these startups businesses, we derive their valuation from growth opportunities. We also estimate their long-term development in their potential markets.

In other words, rather than mainly looking at their history, we look at their potential, i.e., their future.

“Another significant final valuation of start-ups is when a much larger company buys out a unicorn and gives them that valuation.”

This Credit Suisse video talks about the future of unicorn companies.