What is a union? Definition and examples

A union may refer to a workers’ trade union, the action of joining together, a state of agreement or harmony. It also means a marriage or an association or society that people with a common interest or purpose form.

The European Union is a group of twenty-seven countries that created a free-trade area. They also cooperate on other economic and political matters.

This article focuses on the term when it refers to a trade union. In other words, a group of people who work together to improve their work lives. They do this mainly through collective bargaining.

“A Union is a group of people working together to improve their work lives through collective bargaining.” 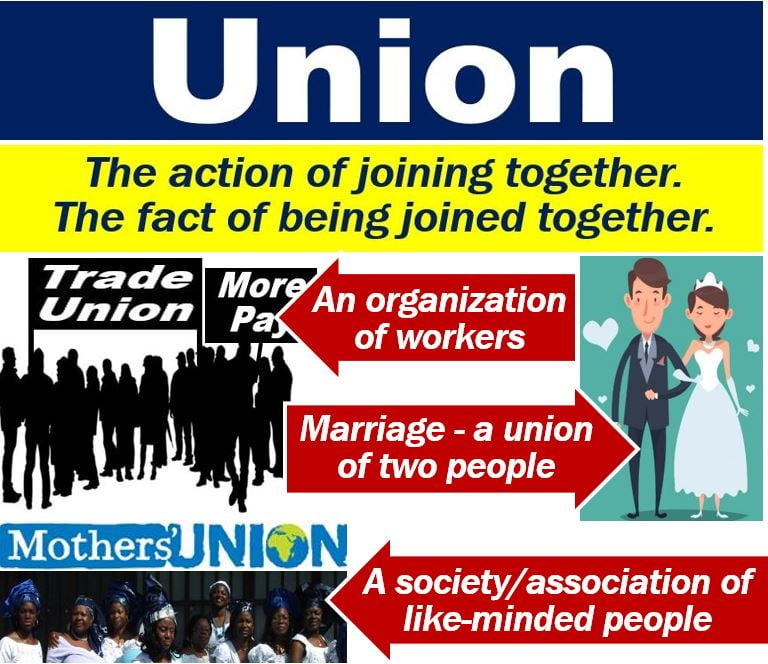 The word ‘union’ emerged in the English language early in the fifteenth century. It came from Anglo-French ‘unioun’ and Old French ‘union.’ The Old French word came from Late Latin ‘unionem.’

A labor (UK: labour) or trade union is an organization of workers. They have come together to achieve a common purpose.

Their common goals may include protecting the integrity of their trade or improving safety standards. The organization may also strive to attain better pay and benefits. Benefits include vacations, health care, dental plans, staff discounts, and retirement. Nearly all labor organizations try to improve working conditions.

“The trade union, through its leadership, bargains with the employer on behalf of members (rank and file members) and negotiates labor contracts (collective bargaining) with employers.”

There are unions for all types of jobs, including blue and white collar positions, as well as professions.

These new industrial workers soon became a sizable population. At first, this pool of skilled, semi-skilled, and unskilled labor spontaneously organized in fits and starts. Unskilled labor refers to workers with no special training or workplace skills.

Gradually, however, they developed into workers’ organizations. However, during the Napoleonic Wars, the government became alarmed at the danger of popular unrest. In 1799, the Combination Act banned collective bargaining in Britain. It also banned trade unions.

Even though the authorities tried to suppress trade unions, they had already become widespread in many cities by 1824.

The General Union of Trades, which emerged in 1818 in Manchester, is probably the first proper labor union. People also called it the Philanthropic Society. They used the latter name to hide the real purpose of the organization. At that time, unions were still illegal.

The first American nationwide workers’ organization was the Knights of Labor in 1869. At the time, unions were illegal. However, legalization occurred gradually as a result of several court decisions.

Trade unions were illegal in France until 1884. In 1887, workers formed the Bourse du Travail. It merged with the National Federation of Trade Unions (Fédération nationale des syndicats) to form the General Confederation of Labor in 1895.