The Welfare State is a system in which the government, i.e., the state, undertakes to protect the well-being and health, the welfare, of its citizens.

People with needs, especially financial ones, are helped through pensions, grants, and other benefits.

The welfare state is a political system based on the notion that rather than individuals, corporations, or the local community, it is the government’s responsibility for the well-being of its people.

The function of the welfare state is to make sure that nobody falls below a minimum standard of living.

In some countries, such as the United Kingdom, the welfare state also provides either free or subsidized housing for people at the bottom of the socioeconomic ladder.

After the Second World War, there was a strong appetite in the United Kingdom for a welfare state. This soon spread across Europe. Today, virtually every European country has a government that tries to make sure that citizens do not fall below a minimum standard of living.

According to the Cambridge Dictionary, the welfare state is:

“A system that allows the government of a country to provide social services such as healthcare, unemployment benefit, etc. to people who need them, paid for by taxes.”

The welfare state – after WWII

In 1942, Beveridge, who was tasked by the government to discover what kind of nation Britons wanted to have after the War, declared that there were five “giants on the road to reconstruction”:

He proposed setting up a welfare state with social security, free education, and a national health service. He also proposed full employment and council housing. 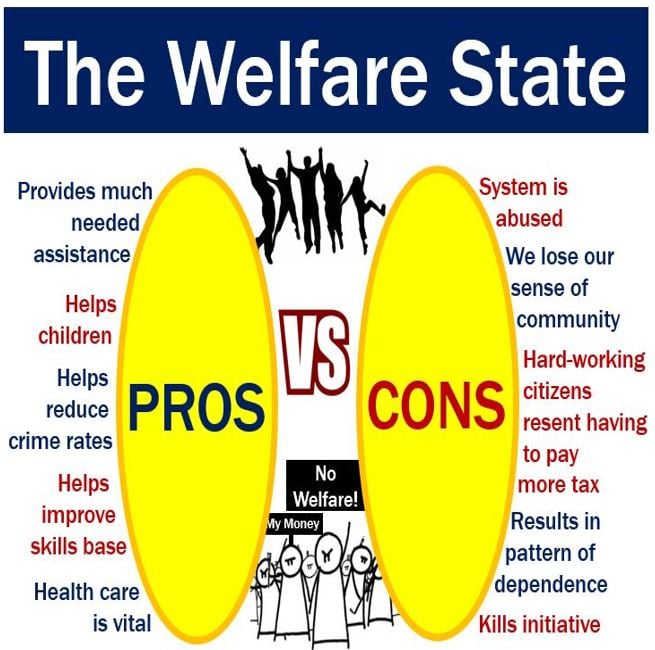 Economists, sociologists and policy-makers have been arguing for decades about the pros and cons of the welfare state. Whether it is a good thing or not, or to what degree the government should be involved in trying to guarantee a minimum standard of living for its citizens, will probably remain a controversial subject for many decades to come.

Etymology of ‘welfare’ and the ‘welfare state’

Etymology is the study of the origin of words, as well as how they evolved over time. We call people who specialize in the history and origins of words ‘etymologists.’

According to the Online Etymology Dictionary, the word ‘Wel faran’ emerged in the 13th century in the British Isles with the meaning ‘condition of being or doing well’. It came from ‘Wel’ plus ‘Faran’, ‘to get along, to fare’.

In 1904, the term ‘Welfare’ emerged with the meaning ‘social concern for the well-being of children, unemployed, etc.’. In 1918, the term had the meaning ‘effort to provide for maintenance of members of a group’.

The term Welfare State, with its modern meaning, first appeared in the English language in 1941.

Welfare economics is a sub-field of economics. We also call it economics with a heart. Welfare Economics looks at how things affect human welfare and social conditions.

It includes the redistribution of wealth and ensuring that all citizens have access to good health care. It also includes education and some other essential services.

Welfare state exists in every country

The welfare state exists in every country, even in nations that claim to reject the notion of government intervention.

The United States’ government, for example, spends over $70 billion each year of SNAP Food Stamps. SNAP consist of financial help for lower-income Americans to buy food.

This Friedrich-Ebert-Stiftung video explains what the welfare state and social democracy are – it uses clear, concise language and easy-to-understand examples.