What is an award?

An award is a prize, an amount of money, or other form of recompense in recognition of an achievement or need. The verb to award means to grant or bestow something because of merit, need, or entitlement. 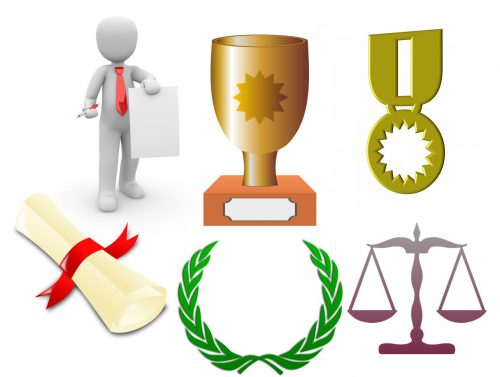 Awards occur in many walks of life. They range from medals, scholarships, and prizes, to university degrees, funding grants, business contracts, and even damages from court decisions.

One of the most prestigious global awards that a person can win is a Nobel Prize. The prize honours people who make a significant contribution to humanity.

“He is the first person in the Western world to have shown us that a struggle can be waged without violence”, said Nobel Committee chairman Gunnar Jahn, in his presentation speech.

Another use of the word award is to win a contract. This is especially the case when there have been several bids and the most suitable one is selected.

In the United Kingdom, the government awards contracts to small and medium enterprises (SMEs) that offer the best value for money. There is an online guide for SMEs seeking to bid for U.K. government contracts.

Law courts can also grant awards. An example of this occurred in 2018, when a San Francisco jury awarded a school groundskeeper $289 million in damages.

The jurors ruled that Roundup, a popular weedkiller made by the agricultural company Monsanto, was the cause of the man’s terminal cancer.

Such a sizeable amount could set a huge precedent for thousands of other cases that are claiming that exposure to Monsanto’s herbicide causes non-Hodgkin’s lymphoma.

Firms also give bespoke awards to employees for significant achievements. Many companies have schemes such as the “top salesperson” or “employee of the month.” However, managers must devise such awards carefully to avoid them backfiring.

The following short film sums up why Costa Rica received the United Nations (UN) 2019 Champion of the Earth award for Policy and Leadership.

More than 95% of the country’s energy comes from renewable sources.