What is revealed preference theory? Definition and meaning

Revealed preference theory suggests that you can determine what consumers’ preferences are by observing what they buy under a range of circumstances, particularly under different price and income scenarios. What we want is revealed by what we do, rather than what we say – actions speak louder than words – so the theory says. When making a purchase, as consumers, we had considered a set of alternatives beforehand, revealed preference theory suggests. Therefore, given that we chose one option out of a set, whatever we chose has to be the preferred option.

Revealed preference theory was pioneered by Paul Anthony Samuelson (1915-2009), an American economist, the first US citizen to be awarded the Nobel Memorial Prize in Economic Sciences. In 1970 when awarding the Nobel Prize, the Swedish Royal Academies stated: “[Samuelson] has done more than any other contemporary economist to raise the level of scientific analysis in economic theory.”

Since Samuelson first introduced the theory, several economists have expanded it. Revealed preference theory remains a key theory of consumption behavior – it is especially useful when you want to analyze consumer choice **empirically.

** Empirically means through observation or experience rather than pure logic or theory. Consumer behavior, especially consumer choice, had been rooted in the concept of utility. In economics, utility refers to how much satisfaction or pleasure consumers derive when they purchase a product or service, or experience an event.

Jeremy Bentham (1747-1832), a British jurist, philosopher and social reformer, developed the concept of utility. The problem with utility is that it is extremely difficult to quantify.

By the beginning of the last century, economists had complained of significant problems with the use of the concept. Several replacement theories were put forward, but they were all similarly criticized.

Samuelson offered a theory on consumer behavior that was not based on utility – the revealed preference theory. According to Samuelson, his new theory was based on observable behavior, and relied on a small number of relatively uncontentious assumptions.

As economists developed the theory, they identified three primary axioms of revealed preference: 1. The Weak Axiom. 2. The Strong Axiom. 3. The Generalized Axiom. 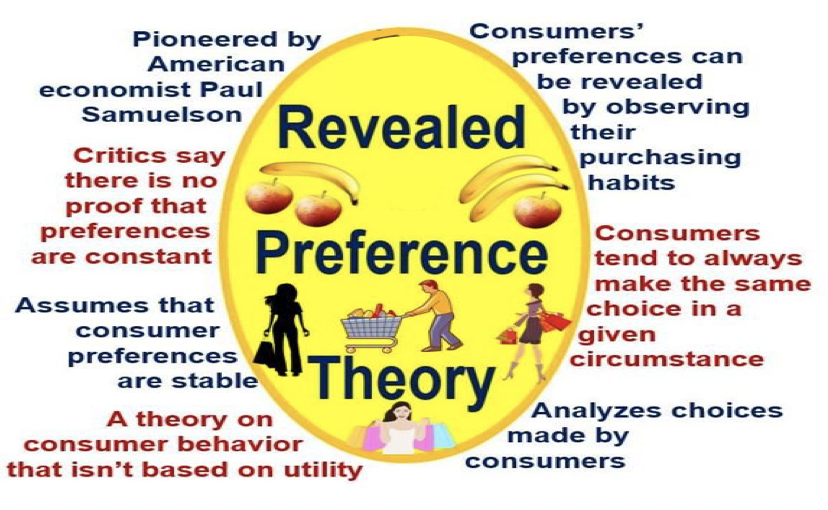 According to Wikipedia, revealed preference theory: “Is a method of analyzing choices made by individuals, mostly used for comparing the influence of policies on consumer behavior. These models assume that the preferences of consumers can be revealed by their purchasing habits.”

– Weak Axiom: at given incomes and prices, if one product or service is purchased instead of another, then, as consumers, we will always make the same choice.

The weak axiom also states that if we buy one particular product, then we will never buy a different product or brand unless it is cheaper, offers increased convenience, or is of better quality, i.e. unless it provides more benefits.

As consumers, we will buy what we prefer and our choices will be consistent, so suggests the weak axiom.

– Strong Axiom: this one basically generalizes the weak axiom by covering a large number of goods and services. It also rules out some inconsistent chains of choices.

In a world where there are only two goods to choose from – a 2-dimensional world – the strong and weak actions are shown to be equivalent.

– Generalized Axiom: covers the case when, for a given level of income and or price, we get the same level of benefit from more than one consumption bundle. In other words, this axiom accounts for when no unique bundle that maximizes utility exists. Revealed preference theory attempts to understand our preferences among bundles of goods, given our budget constraint. For example, if I purchase bundle of goods A over bundle B, where both bundles are affordable, it is revealed that I directly prefer A to B.

The theory assumes that my preferences are stable over the period of observation – I will not reverse my relative preferences regarding bundles A and B.

If, as a consumer, I choose the 3 bananas/2 apples bundle over 2 bananas/3 apples bundle – both affordable options – then we say that my first choice is my revealed preferred to the second.

Revealed preference theory assumes that I will always prefer 3 bananas/2 apples over 2 bananas/3 apples, and that I only consider purchasing the second option if the first one is no longer affordable.

How can we be sure that consumers’ preferences remain constant over time? Isn’t it possible that an action at a specific point in time reveals part of a consumer’s preference scale just at that time?

There is no proof to back up the assumption that a preference remains unchanged from one point in time to another.

If just an orange and an apple were available for purchase – and the consumer chooses an apple – then we can definitely say that the apple is revealed preferred to the orange.

In the real world, however, there are lots of alternative choices. It is impossible to determine what product or set of products or behavioral options were turned down in preference to buying an apple. Some economists say that revealed preference theory makes too many assumptions.

This Policonomics video explains what revealed preference theory is. It works backwards to assume that we can deduce utility functions from consumer behavior.

In other words, if we observe consumers and what they buy, we can make deductions regarding their preferences.