Winding up – definition and meaning

Winding up is a way of dissolving a company or partnership by selling off all its assets, collecting any outstanding income, making sure that creditors are paid from the proceeds, and distributing whatever is left over (net assets). Whatever is left over may be distributed in cash or in kind, initially to the preferred shareholders, and then to the remaining stockholders.

In other words, it is the process by which a business, or part of a business, is brought to an end, and its property and assets are redistributed.

According to YourDictionary.com, winding up is:

“The process of dissolving a partnership or corporation by collecting all assets and outstanding income, satisfying all the creditors claims, and distributing whatever remains (the net assets).”

“These may be distributed as cash or in kind, first to preferred stockholders, if any, and then to remaining shareholders, if any, pro rata. Winding up is in anticipation of a company’s dissolution.” 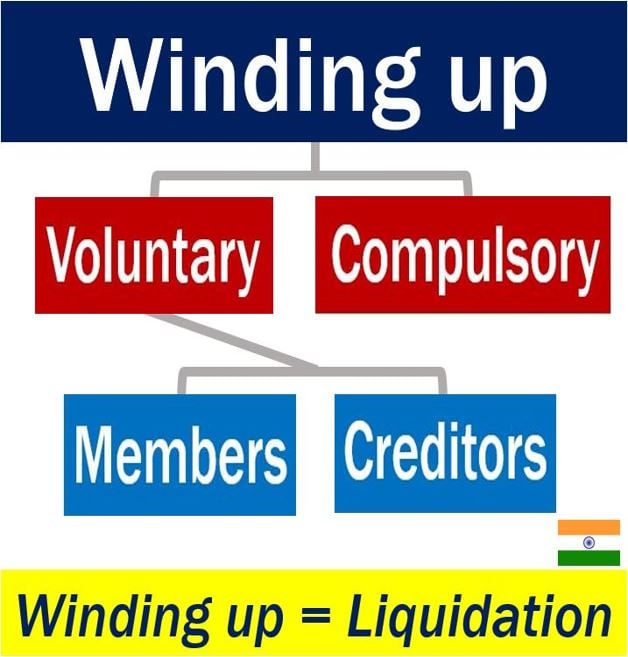 Ways of winding up a company

The three most common ways of winding up a company are:

– Member Voluntary Liquidation – used by solvent companies to shut down their business.

– Creditors Voluntary Liquidation – used by insolvent companies to close down their business. This solution is appropriate when winding up the company is the only option.

According to Begbies Traynor, Britain’s largest professional services consultancy: “This route is only appropriate if your company is insolvent.”

– Compulsory Liquidation – the court orders the company to wind up. The court’s ruling follows a petition, usually because the business is insolvent. At the end of the liquidation, the commercial enterprise is dissolved.

In all the three cases above, the word liquidation means the same as winding up. The term dissolution refers to the last stage of winding up or liquidation.

Winding up a company – the liquidator

The liquidator is the officer who is appointed when a business goes into liquidation or winding up. He or she is responsible for collecting all of the assets of the company, selling them, and settling all claims against the company before its final dissolution.

The term liquidator was first used in Britain in the Joint Stock Companies Act 1856. The equivalent role prior to that was fulfilled by official managers.

In the majority of native-English-speaking nations, the powers of the liquidator are defined by statute. Some powers are usually exercisable without any approvals being required, while others may require sanctions, either by an extraordinary resolution, the court, the liquidation committee, or the company’s creditors (if it is a creditors’ voluntary winding up).

The liquidator usually has to obtain authorization to pay creditors and make arrangements with them.

Who is paid, and in what order?

After all the assets have been removed and sold, the liquidator will pay the claims against the company’s assets. Typically, claimants will be paid in the following order:

1. The costs of the liquidator.

2. Creditors with a fixed charge over the company’s assets.

6. Amount owed to workers for leave.

8. Creditors who have a floating charge over the company’s assets.

9. Creditors with no security over assets.

10. Stockholders (shareholders). Often investors with common shares end up with nothing after a company has been wound up.

After having wound up the firm’s affairs, the liquidator must:

1. Call a final meeting of the members if it is a members’ voluntary liquidation.

2. Call a final meeting of creditors, if it is a compulsory liquidation.

3. Or both, if it is a creditors’ voluntary liquidation.

The liquidator is then expected to send final accounts to the Registrar and notify the courts – after which the company is dissolved.

In common jurisdictions, however, the court may have a discretion for a given period after dissolution to declare the dissolution void so that any unfinished business may be completed.

Video – What is Winding Up?