It is a forum for governments from across the world to negotiate trade agreements and settle disputes – under a system of trade rules.

Essentially, the World Trade Organization is where member nations’ governments try to resolve trade problems that they might have with each other. 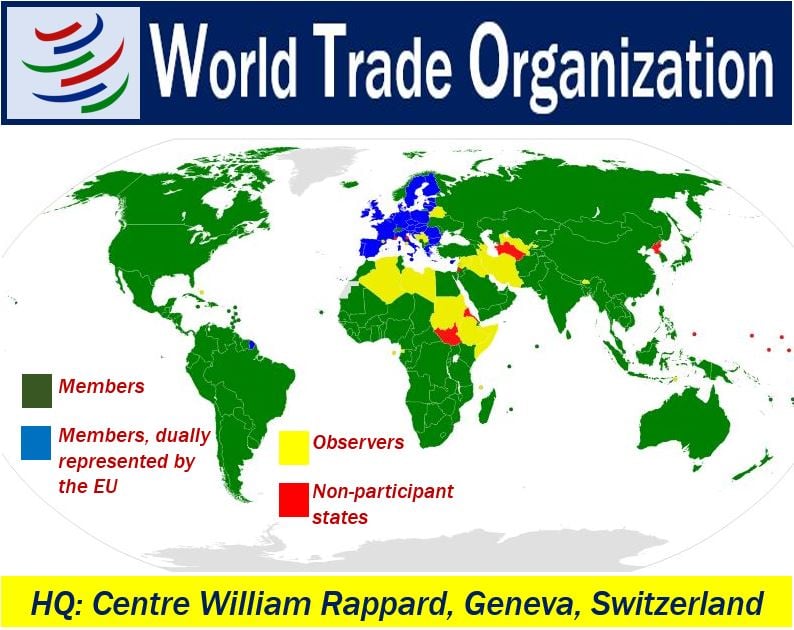 According to Business.Dictionary.com, the World Trade Organization is: “UN multilateral trade organization formed on January 1, 1995 (after culmination of the Uruguay Round) as the successor to GATT and the court of final settlement in trade disputes.” (Image: adapted from Wikipedia)

It is run by its member governments, with all major decisions made by the member states as a whole, either by delegates, ambassadors, or ministers. Ministers meet every two years in Geneva, Switzerland.

According to the WTO:

“The World Trade Organization provides a forum for negotiating agreements aimed at reducing obstacles to international trade and ensuring a level playing field for all, thus contributing to economic growth and development. The WTO also provides a legal and institutional framework for the implementation and monitoring of these agreements, as well as for settling disputes arising from their interpretation and application.”

Trade refers to the action of buying, selling or exchanging products and services between nations, companies, people and other entities. The term is frequently synonymous with ‘commerce’.

The World Trade Organization today has 164 members – 117 of them are either developing nations or separate customs territories.

It is led by a Director General and a Secretariat, who are supported by 700 staff, all located in Geneva. It has an annual budget of $180 million. According to the WTO, its main activities include:

– Reducing Barriers to Trade: such as tariffs, quotas and other obstacles, as well as agreeing on rules regarding the conduct of international trade (e.g. product standards, subsidies, anti-dumping, etc.)

– Enforcing its Rules: this involves monitoring and administering the application of its agreed rules for trade in goods and services, and well as trade-related intellectual property rights.

– Settling Disputes: between member nations regarding the application and interpretation of the agreements.

– Accession: approximately thirty countries are not yet members of the World Trade Organization. WTO aims to help them in the process of joining.

– Publications: it is also a center of economic research and analysis. The WTO publishes reports and issues bulletins on international trade.

– Awareness: explaining to and educating members of the general public about the WTO’s mission and activities 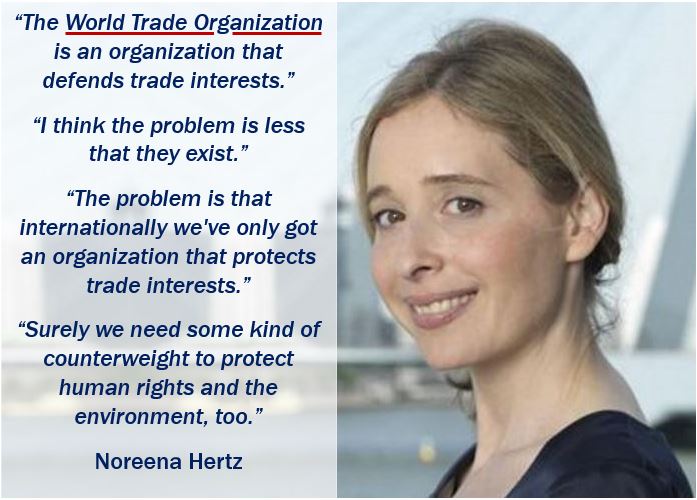 Noreena Hertz is a British academic, economists and author. She is Economics Editor of ITV News. She was described by Vogue as ‘one of the most inspiring women in the world’, and appeared on the cover of Newsweek in 2013. According to Fast Company “For most of two decades [her] economic predictions have been accurate and ahead of the curve.” (Image: adapted from twitter.com/noreenahertz)

“The WTO’s founding and guiding principles remain the pursuit of open borders, the guarantee of most-favored-nation principle and non-discriminatory treatment by and among members, and a commitment to transparency in the conduct of its activities.”

“The opening of national markets to international trade, with justifiable exceptions or with adequate flexibilities, will encourage and contribute to sustainable development, raise people’s welfare, reduce poverty, and foster peace and stability.”

“At the same time, such market opening must be accompanied by sound domestic and international policies that contribute to economic growth and development according to each member’s needs and aspirations.”

The World Trade Organization is often referred to as a ‘free-market’ organization. This is not entirely true, the WTO emphasizes. Its rules and regulations do support tariffs, in limited circumstances, as well as other forms of protection.

Martin Khor, who currently sits on the board of directors of the International Forum on Globalization, and is a member of the UN Secretary-General’s Task Force on Environment and Human Settlements, accuses the World Trade Organization of not managing the global economy impartially.

Mr. Khor accuses the WTO of operating a systematic bias towards the advanced economies – the rich countries – as well as multinational corporations. This impartiality, he believes, harms the world’s smaller and less advanced economies.

Other critics argue that the WTO steadfastly ignores environmental and labor issues. According to Steve Charnovitz, former Director of GETS (Global Environmental Trade Study):

“[WTO) should begin to address the link between trade and labor and environmental concerns. In the absence of proper environmental regulation and resource management, increased trade might cause so much adverse damage that the gains from trade would be less than the environmental costs.”

Many labor unions in the emerging economies (developing nations) argue that by promoting globalization, the WTO is in equal measure undermining labor rights and the environment.

International trade refers to imports and exports between countries, i.e., countries buying and selling things to each other.