The yield gap is a term that is used in investments and agriculture. It is a method of comparing the performances of shares and bonds – it is the average **yield on shares minus the average yield on bonds. The yield gap, in agriculture, is the difference between yield potential and average farmers’ yield over a specified area and period.

** Yield = the amount of money that an investment generates in percentage terms, in cash.

The first half of article focuses on the term when it is used in the world of business and finance, while the second half contains data on its meaning in agriculture.

The yield gap is the difference between the yield on government bonds – specifically long-term ones – and the dividend yield – yield on shares – at any given time.

According to Lexicon.ft.com, the Financial Times’ dictionary of business and financial terms, the yield gap is:

“The difference between the yield on long-term government bonds and the yield on shares (dividend yield) at any given time.” 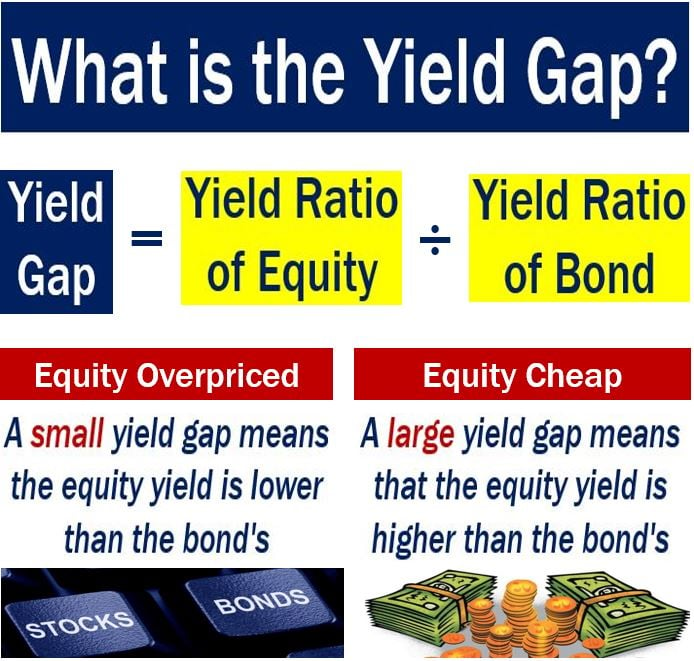 In the world of investment markets, it is used to determine whether shares (equity) are too expensive or cheap.

The yield gap is only used when looking at bonds and shares in the same market – when you are comparing the difference between the average dividend and bond yields.

MoneyTerms.co.uk says that by ‘markets’, we would generally mean either the national or global markets for equities and bonds.

It is a useful measure of a stock market’s valuation, and can also indicate whether a market is under- or over-valued. Abnormal yield gaps can be justified by greater or smaller growth expectations.

MoneyTerms.co.uk makes the following comment regarding the yield gap and time:

“The yield gap is also changes over time in response to changing conditions. For example, if companies commonly choose to increase share-buy backs rather than dividends, the yield on shares will fall.”

“There are a number of reasons why companies might choose to do this, including tax structures, and the widespread tying of directors’ remuneration to share prices.” 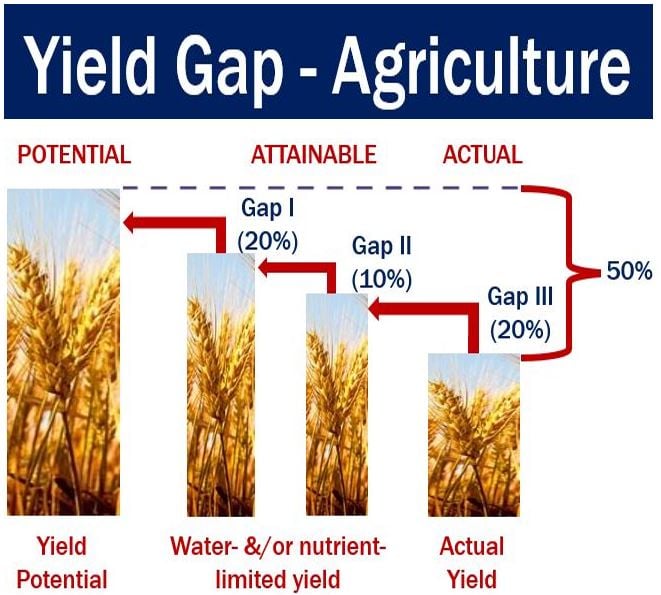 VillFarm.com has the following definition: “We recognize yield gap to be the difference between the potential yield of a given crop at a given location and the actual yield realized by farmers for a given reference climatic condition.” (Image: data source villfarm.com)

The yield gap is the difference between a current farm’s crop yield and what it could potentially yield if it were well run and had the proper technology.

Yield gap is used to describe the huge gulf between the crop yields of the world’s most productive farmers and the least successful ones.

For example, American farmers typically grow up to five times as much corn per acre as their counterparts do in Africa.

In a New York Times blog, dated June 7th, 2011 – ‘Can the Yield Gap be Closed – Sustainably?’ – Justin Gillis quoted experts who said  that closing the yield gap is crucial if we want to feed the world over the long term.

Regarding how to close the yield gap, Mr. Gillis wrote:

“And there is no technological mystery about how to do it: the strategy of using high-yielding modern crop varieties and nitrogen fertilizer has already been proven, in the Green Revolution, to raise output for farmers.”

“But getting these tools into the hands of poor smallholder farmers requires both political leadership and large public investment.”

China has managed to transform itself from a famine-plagued nation to one that today is able to feed itself. India and Pakistan, to a significant extent, have also managed to make the transition.

The vast majority of African governments, however, have failed – partly because of poor leadership and a chronic lack of funds.

Indicators Report has the following definition for yield gap:

“Actual yields relative to the yield that can be achieved under good management conditions, taking into account climate and the sustainable use of water (i.e. water-limited yield potential).”

Indicator Report says that nations should aim for the majority of their farms to achieve at least eighty percent of the attainable water-limited yield potential. In order to achieve this – on a sustainable basis – governments need to implement the right policy and technology road-maps.

The question that baffles the majority of people who have some spare money to invest is where to place this money. Should it be debt or equity? The speaker then goes on to tell us what the yield gap is, and also explains what its benefits are.