The manufacturer of a green rechargeable battery says its technology is ready to provide developing countries with cheap affordable carbon-free energy. 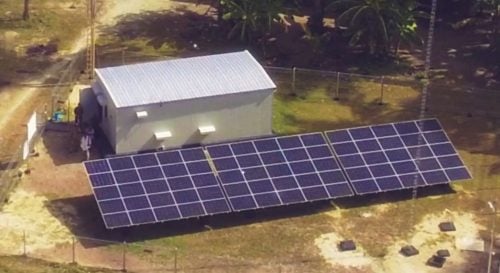 The technology, which uses only zinc and air, “has now broken the manufacturing cost barrier of $100 per kilowatt hour,” says the energy storage solutions company.

This is how the energy system works:

– Electricity generated from sources such as solar power converts zinc oxide into zinc and oxygen: this is the charging cycle.

– In the discharging cycle, the zinc (which stores the energy) is oxidized back to zinc oxide using oxygen from the air: this releases electrons which make the electric current.

– What is particularly significant about this system is that not only is the zinc able to hold its charge for long periods, but that the system can undergo thousands of charge-discharge cycles without deteriorating.

The energy system is “integrated with digitally controlled intelligence” and monitored “in real time in the cloud.”

NantEnergy say that the 3,000 microgrids using green rechargeable battery systems that they have installed in nine African and Asian countries provide power to more than 200,000 people living in over 110 villages.

Biotech billionaire, surgeon, and philanthropist Dr. Patrick Soon-Shiong, who is chairman of NantEnergy and founder of its umbrella company NantWorks, says that the system is the safest and most reliable green rechargeable battery in the world.

The scalable technology offers a viable alternative to lithium-ion batteries, does not contaminate the environment, and does not present a fire risk.

In addition, it does not use lithium and cobalt and can replace older technology based on lead-acid and diesel.

As well as serving African and Asian villages, air-breathing zinc rechargeable batteries are also providing energy storage to more than 1,000 telecommunications installations in the United States, Mexico, parts of Central and Latin America, and Southeast Asia.

In these installations, the systems provide hours and even days of energy storage to microgrids and cellular communications towers.

The global impact of NantEnergy’s installed green rechargeable battery systems has been to remove the need for 1 million lead-acid batteries and to offset more than 4 million litres of diesel fuel.

“By harnessing biology, chemistry, the air and the sun,” says Dr. Soon-Shiong, “we are designing energy sources of the future to electrify the world.”

“Zinc occurs naturally in the earth and in the food we eat; it is healthful and abundant,” he adds

Chuck Ensign, who is CEO of NantEnergy, says that they have created the “safest, de-risked, globally-deployed system in the world with a 6-year history of over 1,000,000 cycles to date.”

“It’s remarkable,” he notes, “because this eliminates the need for lead, lithium, and cobalt, which are scarce and dangerous materials.”

In the following news video from CNBC, Dr. Soon-Shiong discusses how the green rechargeable battery based on zinc air is going to replace lithium-based ones.