The United Kingdom government are investing £7 million in a research programme to develop microrobots that locate and fix leaks in underground water and sewage pipes.

Digging up roads in order to inspect and repair buried pipes causes significant disruption to road users and businesses. 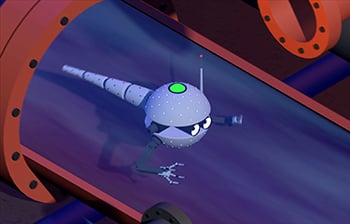 The microrobots will have onboard sensors and a navigation system to help them locate and identify cracks and leaks as they swim through the underground pipes. Image: University of Sheffield

In the UK, there are around 1.5 million road excavations every year to access buried pipes.

The disruption to businesses can be as much as £5.5 million a year.

But, due to the limitations of current technology, it is not easy to find and repair breaks in underground pipes.

Find and mend pipes without excavation

Utility companies have to resort to road and pavement excavation in order to locate and identify the problems.

The purpose of the research programme is to find damaged pipes so that they can mended without the need for disruptive excavations.

The 1-cm microrobots will have onboard sensors and a navigation system to help them find cracks as they swim through the buried pipes. They will be able to communicate and share their data.

The researchers will be investigating ways in which the microrobots can map and inspect the complex networks of buried pipes that make up the UK’s water and sewage systems.

“This innovation,” says Kirill V. Horoshenkov, who is a professor in the Department of Mechanical Engineering at the University of Sheffield, “will be the first of its kind to deploy swarms of miniaturized robots in buried pipes together with other emerging in-pipe sensor, navigation, and communication solutions with long-term autonomy.”

Horoshenkov, who is the programme’s lead academic, emphasizes the fundamental importance to society of maintaining “safe and secure supplies” of essential resources such as water and energy.

The universities will be collaborating with water utilities and other industry partners.

The first step will be to define the requirements for a “pervasive robotic sensing platform” that can operate in pipes that carry clean water, wastewater, and gas.

In October 2018, the University of Sheffield launched the Integrated Civil and Infrastructure Research Centre (ICAIR). The joint funders of the ICAIR are the University, the EPSRC, and the European Regional Development Fund.

The ICAIR will test the microrobots and demonstrate the technology to end-users.

The programme will also use another facility based at Birmingham University that is due to open later this year.

Called the National Buried Infrastructure Facility (NBIF), it will enable researchers to carry out “full-scale or near full-scale” testing of the microrobots under fully-controllable conditions.