Scientists have developed a new theory of what happens at the small scale in ceramic materials such as those that go to make rechargeable batteries, fuel cells, and advanced electronics.

The new “grain-boundary” theory could help researchers and developers to improve the performance of devices that use “ionic ceramics.” 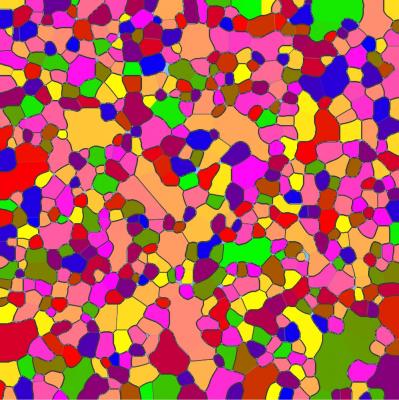 What happens at the interfaces between grains can influence the large-scale properties of a ceramic material. Image: Purdue University: Vikrant Karra and Edwin García

It concerns physical properties of the interfaces between the many faces of the tiny polycrystalline grains that make up an ionic ceramic material.

Each grain has its own crystal structure and other attributes, and these create unique conditions at boundaries with other grains.

What happens at the interfaces between the grains can influence the properties of the overall material.

Wrestling with a 40-year challenge

The new theory is the brainchild of doctoral student Suryanarayana Karra Vikrant and Edwin García, a professor of materials engineering. They both hail from Purdue University in West Lafayette, Indiana, in the United States.

Vikrant, who led the research, and García describe the development of the theory, and its validation in an example material, in a report now published in the journal npj Computational Materials.

García says that for the past 40 years, scientists have been wrestling with a challenge that, if solved, could improve the performance of ionic ceramics.

The challenge is how to overcome the insulating effects that occur at the interfaces between grains in ceramic materials that in turn have an impact on material properties.

Applying the new theory could lead to improved engineering of “interfacial ceramics” that results in batteries and fuel cells that charge more rapidly and hold their charge longer.

“From a basic-science perspective,” says García, “this work is very cool, but it’s also relevant to energy applications.”

The new theory extends that which pioneering researcher John Cahn developed for metal, a feat for which he received a National Medal of Science in 1998.

It shows that the interfaces between the grains of an ionic ceramic are undergoing phase transitions, which is something that has not been identified before, says García.

These transitions can include changes in voltage, charge, and the amount of disorder in the crystal structure of the material. While these are features at a tiny scale, they can affect the material’s performance and degradation at the larger scale.

The researchers validated the new theory in yttria-stabilized zirconia (YSZ), an ionic ceramic that fuel cells use.

However, what they found can also apply to other ceramics. These include those in solid-state batteries, potentially making them perform better than lithium-ion batteries.

Improved battery and other energy technologies

Using solid-state batteries in place of lithium-ion ones in electric vehicles, for instance, would make them lighter. And, because they have no flammable electrolytes, they would also make the vehicles safer.

The researchers believe that the new theory could also help to improve the design of ceramics in other applications. One such application is piezotronics which goes into computers, energy systems, and devices that measure stress in materials.

By applying the new theory to batteries, the team also hopes to learn more about how grain interfaces behave.