Inventors in the United States have created a novel 3D printer that uses light to produce solid objects all in one go without having to build them up layer by layer.

The printer projects a 3D computerized image of the object into a rotating, light-sensitive liquid resin. 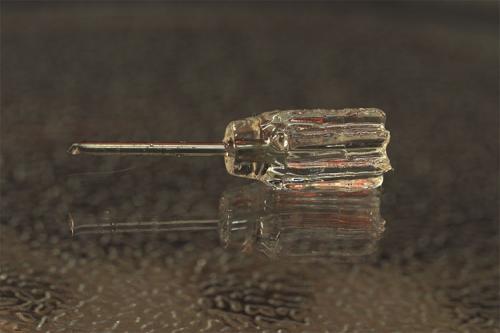 The researchers used the novel 3D printer to add a handle onto the metal shaft of a screwdriver.
Image: Stephen McNally, University of California, Berkeley

Within a few minutes, the light-exposed parts of the liquid resin solidify to form the object.

The inventors, from the University of California, Berkeley and Lawrence Livermore National Laboratory, have named the new device the “replicator” after the Star Trek gadget that can materialize items on demand.

They refer to the technology behind the novel 3D printer as “computed axial lithography (CAL) volumetric fabrication.”

In a recent Science paper they explain how a prototype of the device achieved “printing times of 30-120 s for diverse centimeter-scale objects.”

Set to transform design and manufacture

The team suggests that the innovation could transform the design and manufacture of objects ranging from footwear to prostheses.

A big advantage is that it can produce objects that are more complex, physically smoother, and more flexible than products of current 3D printing technology.

Another plus is the ability to print objects to cover existing items, such as adding a handle grip to the metal shaft of a screwdriver. Traditional 3D printers can only do this with great difficulty, if at all.

“I think,” says senior author Hayden K. Taylor, who is an assistant professor in the Department of Mechanical Engineering at the University of California, Berkeley, “this is a route to being able to mass-customize objects even more, whether they are prosthetics or running shoes.”

“The fact that you could take a metallic component or something from another manufacturing process and add on customizable geometry, I think that may change the way products are designed,” he adds.

Printing objects all in one go

The majority of current 3D printers produce solid objects by building them up layer by layer. Often, this produces edges where you can see the steps of each layer.

Current 3D printers also struggle to make flexible objects. This is because the materials can deform as they come out of the printer. In addition, certain shapes, such as arches, need extra supports during the printing.

Taylor outlines how they built the technology. They took an “off-the-shelf video projector” that he brought from home and plugged it into a laptop.

From this, they projected “a series of computed images” into a rotating cylinder full of 3D printing resin.

While the actual method was subtler and more sophisticated than this, such as precisely formulating the resin and generating the computed images, “the barrier to creating a very simple version of this tool is not that high,” notes Taylor.

He and his colleagues created a number of objects with the novel 3D printer. Examples included a model of a jawbone and a miniature version of Rodin’s statue “The Thinker.”

The present prototype can make objects that are no more than four inches in diameter.

The team got the idea for the novel 3D printer from computed tomography (CT). Doctors use CT scans to locate fractures and tumours inside the body.

The CT scanner sends electromagnetic radiation such as X-rays from different angles into the body. An analysis of the patterns that the rays make when they emerge from the body reveals the 3D shape of the object.

Taylor says that their method essentially reverses the principle of CT. Instead of using rays to measure an object, they are using them to create an object.

“[A] lot of the underlying theory that enables us to do this can be translated from the theory that underlies computed tomography,” he adds.

Formulating the 3D printing resin was another challenge for the team. The best formula turned out to be a mixture of liquid polymers and photosensitive molecules with dissolved oxygen.

When light hits the photosensitive molecules, they use up oxygen. Lack of oxygen causes polymer chains in the lit-up regions of the liquid resin to form “cross-links” that turn it into a solid.

The method generates hardly any waste as any unused resin can be recycled by heating it up in an atmosphere containing oxygen.

The following short video from the University of California, Berkeley summarizes the features and advantages of the novel 3D printer.