Offshore refers to where the usual regulations of an entity’s home country do not apply. This may be a place at sea some distance from the shore, such as an island tax haven in the Caribbean, or just legally offshore. For example, if people resident outside the UK do business in London, they are participating in offshore transactions.

In other words, the term refers to anything that is outside the jurisdiction of a country – abroad.

In the world of business and finance, we use the term when talking about foreign companies, banks, deposits, and investments. 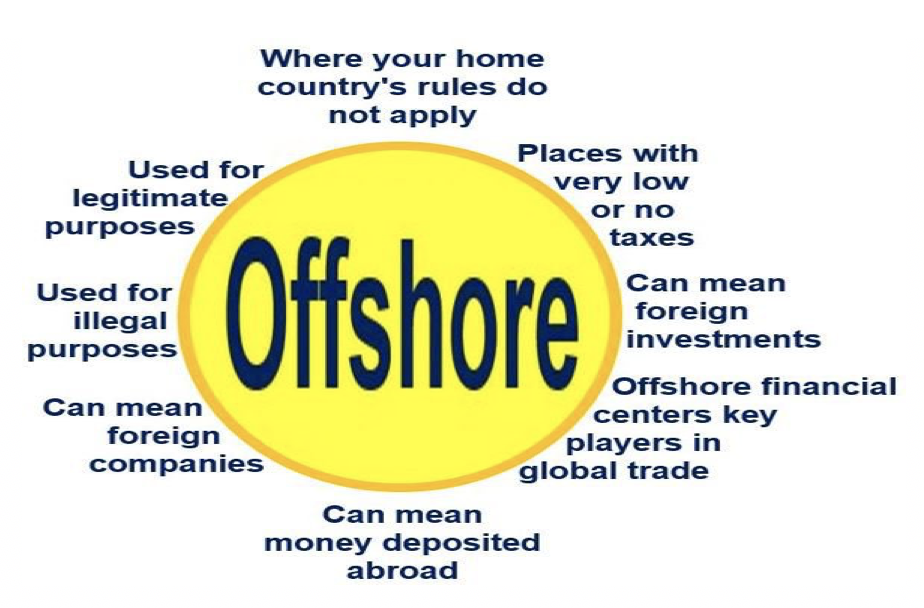 Moving abroad could be a legitimate and legal strategy that somebody takes to avoid taxes. They may also want to enjoy less stringent rules and regulations.

Not all offshore activities, however, are legal. Money launderers and tax evaders commonly carry out their activities using financial institutions in tax havens.

According to the Oxford Living Dictionaries, offshore refers to businesses that people set up abroad. These people aim to take advantage of lower taxes or costs or less stringent regulation.

Many countries, territories, and jurisdictions across the world have OFCs (offshore financial centers). Examples include:

Bahamas used to be a major OFC but has lost ground to other centers since its independence in 1973.

It is one of the world’s leaders in captive insurance, offshore funds, and aircraft registration.

These tiny islands have a huge number of offshore companies. In fact, they probably have more than any other OFC.

Cayman has the strongest presence in the American securitization market. It also has the largest value of assets under management in offshore funds.

Dominica has the world’s largest number of relatively new offshore companies. Since the turn of the century, it has become an important OFC for banks.

Financial services have also grown in Dublin. Corporate tax in Ireland is more than 70% lower than in the United States.

The former British colony is one of the world’s major international financial centers. For over a century, Hong Kong has had an important capitalist service economy driven by free trade and low taxation.

It has one of the greatest concentrations of company headquarters in the Asia-Pacific region.

Jersey has particularly strong funds management and banking sectors. It has a surprisingly high number of lawyers, fund managers, and professional advisers for such a small place.

This tiny country is the market leader in UCITS (Undertakings for Collective Investments in Transferable Securities). UCITS is a regulatory framework of the European Commission that creates a harmonized regime across the European Union for the management and sale of mutual funds.

Mauritius is a popular inward and outward investment platform for European, African and Asian countries. It has several double-taxation agreements.

** Transparency refers to the extent to which all data is readily and openly available.

Located where North and South America meet, Panama is a major international maritime center. However, since the 1990s, it has lost out to other competitors in the region.

New Zealand has the advantage of being a true primary jurisdiction with a stringent but practical regulatory regime. While still retaining close ties to Europe, it is an ideal place for the Asian markets.

A high proportion of OFCs are or used to be British colonies or Crown Dependencies. They frequently refer to themselves simply as offshore jurisdictions.

According to the US National Bureau of Economic Research, approximately 15% of all the countries in the world are tax havens today. Most of them are small and wealthy.

Offshore financial centers and the EU

Over the last few years, the European Union (EU) has made many OFCs sign up to the EU withholding tax and exchange of information directive. However, so far Bermuda and Barbados have not signed up.

An offshore company is one that operates in one country but is registered in another; usually a tax haven. An offshore fund is a fund that exists abroad.

Offshore manufacturing refers to relocating a production plant abroad, and importing the finished products. In other words, making the goods abroad and selling them at home.

An offshore trust is similar to an onshore one, but it is usually outside the jurisdiction of the trustor’s country.

Offshoring means relocating some of a firm’s operations abroad.

In this Erste Group Bank AG video, Reiner Münz explains what an offshore financial center is.