What is Okun’s Law? Definition and meaning

Okun’s Law describes how unemployment changes according to how much a country’s gross domestic product (GDP) grows or contracts. The relationship is based on **empirical research by Arthur Melvin Okun (1928-1980), an American economist who was chairman of the Council of Economic advisers in 1968 and 1969. Prof. Okun also created the Misery Index, the sum of a country’s unemployment and inflation rates over a specific period.

** Empirical means concerned with, based on, or verifiable by experience or observations, rather than pure logic or theory.

Even though unemployment declines when GDP grows, and rises when GDP shrinks, it lags behind the output figures.

According to Okun’s Law, a one-point rise in the cyclical unemployment rate is linked to a 2-percentage point decline in real GDP. This relationship varies, depending on when and in which country this occurred. Remember that percentage point and percent have quite different meanings.

According to BusinessDictionary.com, to define Okun’s Law is as follows:

“Empirical relationship in economics whereby every three percent drop in the ratio of actual GNP to the full capacity GNP causes about one percent increase in unemployment. Discovered by the US economics professor, Arthur M. Okun (1928-80).” 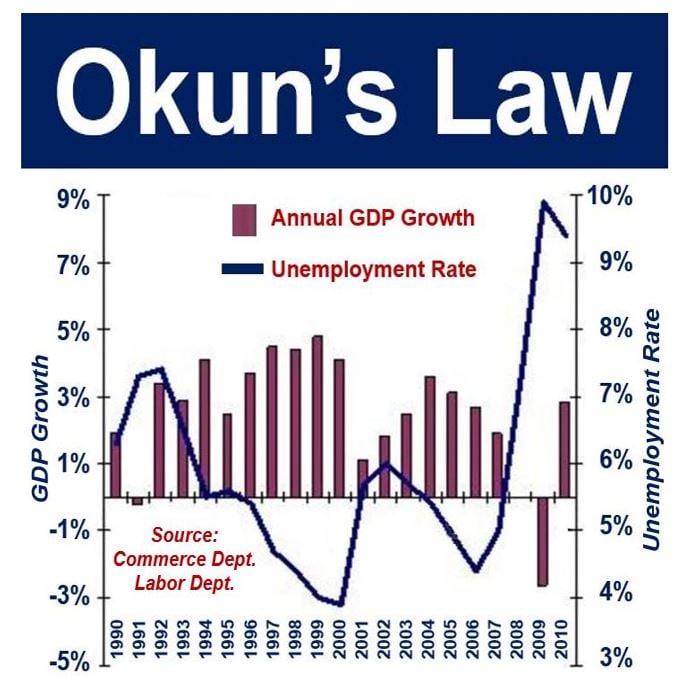 Unemployment did not react exactly as Okun’s Law would have predicted in 2008 because employers may have overreacted, laying off even more employees than they needed to, the Government’s initial figures were wrong, productivity increased considerably, and people were dropping out of the labor force. (Image: adapted from blogs.wsj.com/economics)

This relationship between the unemployment rate and GDP growth or contraction is not carved in stone – it merely reflects the USA’s economy during the period that Prof. Okun studied.

In the majority of cases across the world and different eras, however, Okun’s Law is fairly accurate in estimating the probable impact on unemployment of changes in GDP.

In his original statement of Okun’s Law, Prof. Okun said that a 2% rise in output corresponds with a:

Several factors influence the unemployment rate, including labor productivity, the number of people who stop/start seeking work, average hours worked each week by employees, and the rate of GDP growth or contraction.

Prof. Prachowny argued that most of this change in GDP is actually due to fluctuations in other factors, and not unemployment, such as hours worked and capacity utilization.

Holding these other non-unemployment factors constant reduces the link between unemployment and GDP to approximately 0.7% for every 1% change in the jobless rate.

Economists say that in the USA, the size of the decreases appears to be declining over time. According to Ben Bernanke, an economist at the Brookings Institution, and chairman of the US Federal Reserve from 2006 to 2014, and Andrew Abel, Professor in the Department of Finance at The Wharton School, University of Pennsylvania, USA, estimates based on recent data give around a 2% decline in GDP for every 1% rise in unemployment.

Why are GDP & unemployment rates different?

– a reduction in the multiplier effected created by workers’ circulation of money,

– labor productivity might fall, maybe because companies retain more employees than they require, and

– unemployed people might stop seeking work – they drop out of the labor force – this means they are no longer included in the unemployment data.

Okun’s Law has one implication: a rise in the size of the labor force or greater labor productivity growth can mean that GDP increases without unemployment rates declining – a phenomenon known as jobless growth. Arthur Melvin ‘Art’ Okun (1928-1980), born in Jersey City, New Jersey, USA, was an economist. He was chairman of the Council of Economic advisers – which advises the President of the United States on economic policy – in 1968 and 1969. He was a professor at Yale University and a fellow at the Brookings Institution. According to the Brookings Institution: ” His intellectual powers could cut through to the essence of a complex problem. His common sense combined with deep insight could uncover central relationships while avoiding academic fads and techniques for their own sake.” (Image: fuw.ch)

How useful is Okun’s Law?

Economists say that Okun’s Law is an invaluable tool in forecasting trends between joblessness and the real GDP.

Although it is not 100% accurate, most economists conclude that the information proved by Okun’s Law is acceptable to a certain degree.

It appears to be more accurate for short-term predictions than long-term ones, because of unforeseen market conditions that probably affect Okun’s coefficient.

Just a few years after the global financial crisis of 2008, in an article published by the Federal Reserve Bank of Atlanta – GDP Growth, the Unemployment Rate, and Okun’s Law – Patrick Higgins wrote:

“Considerable debate and disagreement take place about how close and stable a relationship these factors have under Okun’s law.”

“However, over the past two years, Okun’s law has held up reasonably well—growth has been close to many estimates of potential and the unemployment rate, on balance, has not declined much since the end of the last recession.” The Gap Version of Okun’s Law – what we the call ‘Okun gap’ – is not easy to use in practice. It is not easy because potential GDP and the natural rate of unemployment cannot be measured, only estimated. The calculation in the image below is more commonly used.

In another article, published by the Federal Reserve Bank of San Francisco – Interpreting Deviations from Okun’s Law – authors Mary C. Daly, Fernanda Nechio, Òscar Jordà and John Fernald explained that Okun’s Law appeared to be wildly inaccurate during the Great Recession, which raised questions whether this rule of thumb might no longer be relevant as a forecasting tool.

“However, recent revisions to GDP data show that its relation with unemployment followed a fairly typical cyclical pattern compared with past deep recessions and slow recoveries.”

“The comparatively common patterns suggest that rumors of the death of Okun’s law during the Great Recession were greatly exaggerated.” The Difference or Growth Rate Version of Okun’s Law (above) is more commonly used – it relates fluctuations in output to variations in unemployment.

In an International Monetary Fund (IMF) study – Do Forecasters Believe in Okun’s Law? An Assessment of Unemployment and Output Forecasts – which tested the relevance of Okun’s Law on nine different countries, authors Laurence Ball, Prakash Loungani and João Tovar Jalles found that the relationship between predictions of unemployment rate changes and GDP growth was negative, which was consistent with with the Law.

They also found that the variation across countries in the Okun coefficient lined up well in the predictions and the data, especially regarding to the economies of Japan, Italy and Germany.

“Moreover, the correlation between output and unemployment forecast revisions is stronger in year-ahead forecasts than in current-year forecasts; this finding leads us to conjecture that forecasters’ reliance on Okun’s Law is stronger in the early stages of the forecast horizon, when information about the likely departures from Okun’s Law is scarce.”

In this XP Education video, Xiaoping Li gives a clear and easy-to-understand explanation of what Okun’s Law is, plus other features of the labor market.