If you are quitting marijuana or weed, it’s like breaking a habit. As we all know, some habits, especially if we enjoy them, are not easy to give up. In most cases, the longer somebody has been habitually doing something, the harder it is to stop. 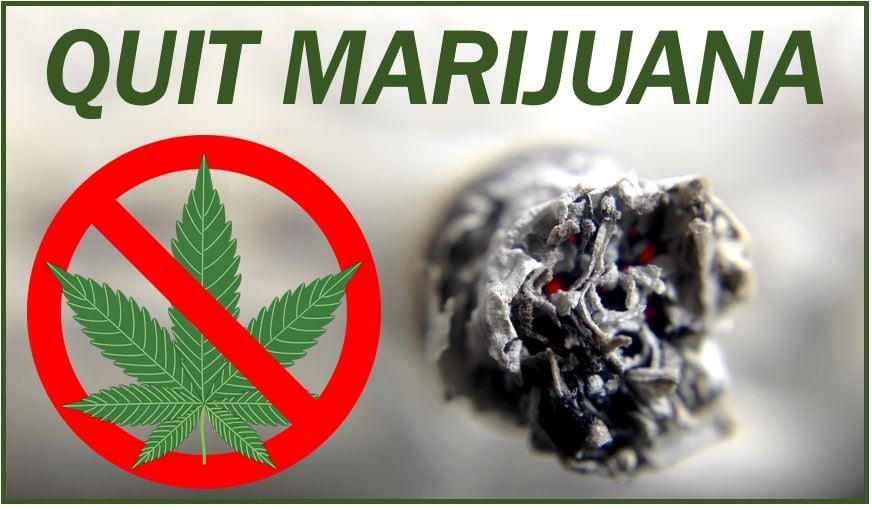 Some habits are addictions. Tobacco smoking for example, for people who are hooked on nicotine, is not a habit. Most cigarette smokers would like to stop, but they say they can’t because they are addicted.

Unlike alcohol or nicotine, weed doesn’t lay claim to addictive properties, aside from the psychological habit that one may develop due to its pleasant effects.

The National Institute on Drug Abuse (NIH) in the United States says that marijuana consumption can lead to the development of problem usage. Healthcare professionals refer to it as marijuana use disorder, which in severe cases takes the form of addition.

Studies suggest that approximately thirty percent of regular users have varying degrees of marijuana use disorder.

The NIH makes the following comment regarding people with marijuana use disorder who try to quit:

“People who use marijuana frequently often report irritability, mood and sleep difficulties, decreased appetite, cravings, restlessness, and/or various forms of physical discomfort that peak within the first week after quitting.”

Smoking weed excessively can certainly alter our behaviour and performance. For many who are newly experimenting with this herb, the idea of entering the workplace while high is a little embarrassing.

The workplace is one place weed most definitely does not belong. It can lead to second-guessing decisions, spending too much time on unnecessary details, and even incoherency. Its effects can be similar to what happens when people consume too much alcohol. Our judgment and perspective can be a little skewed, depending on how accustomed we are to smoking it.

Why do people want to quit?

While weed doesn’t seem to be a huge health threat or danger like tobacco smoking or alcohol consumption, it’s understandable that some of us want to quit. Some people don’t want to be habitually dependent on any substance, especially one that is costly.

Many users who want to quit marijuana say that it is mainly to save money.

Others don’t like the strong odor. If pot is illegal where you live, that’s another consideration.

Most people who do not smoke marijuana find the smell of it repugnant, i.e., when it is burning. This can make it difficult for non-users who live with somebody who smokes it indoors.

Even when it is smoked outdoors, the smell of weed can cling to the smoker’s clothing and hair, making it difficult for a loved one to get close unless they are adjusted to the smell. In fact, the smell alone is one factor that tends to offend those who are skeptical of using it.

So, two reasons for quitting marijuana/weed are the cost and the smell. A third reason is the desire to be in control of our faculties, particularly at work, while driving, interacting with children, or being involved in serious discussions, etc.

A fourth reason for quitting is because, for some people, especially those who are new to the experience, smoking weed brings on a type of paranoia. Paranoia is a potentially very serious side effect.

When people experience paranoia, they have an unfounded fear that others want to harm them. Young users are more prone to have episodes of paranoia after smoking marijuana. So are individuals in bad health.

Anybody who becomes paranoid each time they consume marijuana should seriously consider quitting for good.

What are the steps one could take to quit? You should start by making a list of reasons why you should stop. Make this list compelling so that you won’t be tempted to go back on the process.

If you’re quitting for a loved one, that should be compelling enough. So should giving up because you don’t feel comfortable in the workplace after using weed.

When you have completed your list, read it before you go to sleep and put it on your bedside table. When you wake up in the morning, go through the list again before you get up. Keep reminding yourself throughout the day why it’s better for you to quit.

Replace it with something healthy

A good way to stop a bad habit is to replace it with a good one. If you have no serious health conditions, you could start some kind of physical activity. You could take up, for example, speed walking, running, swimming, tennis, golf, cycling, or doing workouts in the gym.

Stay away from users

Marijuana is an extremely popular recreational drug. This means that some of your friends are most likely consumers.

If you want to give up, consider avoiding those who smoke weed and hang out with friends who don’t. The less temptation you are exposed to, the greater your chance of quitting completely and permanently.

Get rid of your paraphernalia

If you see your pipe every time you go into your bedroom or living room, you will be reminded of something you are trying to give up. Get rid of all your pipes, trays, grinders, papers, and anything else related to marijuana usage.

If you become discouraged, miserable, or depressed, consider seeing a therapist or even an addiction specialist. It is not an extreme measure. Your aim is to quit for good. There are health care professionals who can help make this happen.

Remember, there is nothing shameful in reaching out for help.