Scientists make tiny dispersible robots that can be sprayed

Scientists have created microscopic dispersible robots that can sense and track their surroundings.

The devices are about the size of a human egg cell and consist of microscopic electronic circuits mounted on superthin 2-D insoluble particles called “colloids.” 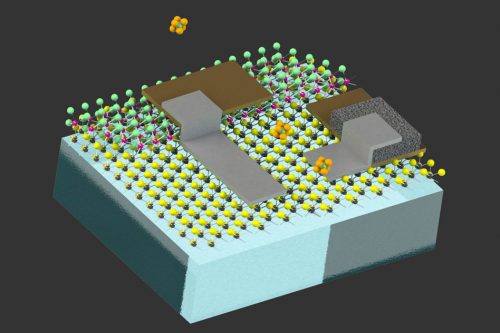 The tiny dispersible robots can float freely in liquid or air and monitor their surroundings. Image: Courtesy of MIT researchers

They are the creation of researchers from Massachusetts Institute of Technology (MIT) in the United States, who describe how they designed and made them in a paper published in Nature Nanotechnology.

They envisage the dispersible robots being used in many different ways, ranging from aerosolized sprays for detecting harmful substances in the air to carrying out diagnostics in the human body.

Being mounted on colloids gives the dispersible robots the ability to float “indefinitely” in air or liquid. And they carry just enough electronics to allow them to gather, process, and store data about their environment.

“Colloids, says senior study author Michael Strano, a professor of chemical engineering, “can access environments and travel in ways that other materials can’t.”

Like dust particles, they can “float indefinitely in air,” he explains. Their tiny size means that random bombardment by air molecules is “stronger than the downward pull of gravity.”

For the same reason, he adds, “colloids suspended in liquid will never settle out.”

The MIT team is not the only one that is working on the idea of dispersible robots. But while others have tended to focus on how to control their movement, the MIT researchers have worked on making them more functional.

Their devices need neither batteries nor external power; a single photodiode provides all the power that their tiny processor and memory circuits require.

The photodiode produces an electric current from surrounding light. The 2-D material can vary to suit the type of chemical to be sensed. When it meets and binds with the target chemical, the electric current flows more easily.

The researchers tested the dispersible robots in a range of experiments. In one, for instance, they aerosolized them in a chamber and then exposed them to a test substance.

Prof. Strano says that the devices could one day be used to check leaks in oil and gas pipelines. Current methods rely on human crews armed with expensive tools.

Dispersible robots, on the other hand, could enter a pipeline at one end of the problem area, gather information as they flow through it, and then yield it when they are collected at the other end and complete their mission.

During their journey down the pipeline the devices could record changes in conditions – such as presence of contaminants. The team is thinking about adding a timing circuit to allow for locations of the changes to be recorded.

In a similar way, the devices could be used to track conditions in the human body. An obvious example is passing them through the gut to help diagnose inflammation and disease markers.

The team is now working on a way to add communication capability so that the tiny robots can transmit their data and not have to be in physical contact with the receiving equipment.

Prof. Strano says that other approaches in nanoscale robotics have yet to reach the level that they demonstrate in their paper.

Their dispersible robots are “very smart particles, by current standards,” he concludes, adding that he and his team see their work as breaking new ground in robotics.