Shooting from the Hip with AI-Powered Rifle Tech

Elbit Systems, whose main headquarters is in Israel, recently unveiled its latest rifle — an AI-powered rifle system. The new system lets soldiers to accurately fire from the hip and around corners. The electronics company calls this new system, ARCAS, or Assault Rifle Combat Application System. With it, a soldier hides behind cover, sticks the gun out, and sees the target via the sight mounted on the rifle.

The new system processes the info from the field of view of the soliders. ARCAS comprises a miniaturised computer for receiving and processing information. The entire system uses data from the electronic optical (EO) sight, data from other team members using ARCAS, the mechanical data from the rifle, and the tactical info from the command and control (C2) systems. 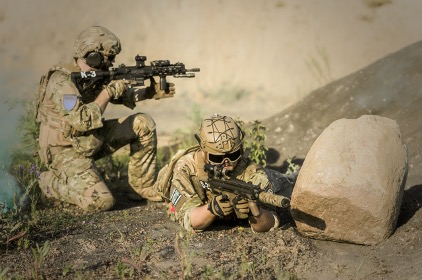 Elbit Systems is an international high tech company providing various programs in homeland security and defence areas worldwide. The company’s portfolio consists of naval, land, and airborne systems and different products for commercial, homeland security, and defence applications. It has subsidiaries in Europe, Asia-Pacific, South America, and North America. You can get a chance to see some of the new products from the company as Elbit Systems London will be at the Security Cleared Expo in Manchester.

With the help of AI, the information received by the soldier is in the form of intuitive augmented reality. The soldier controls it through a joystick button located on the forward grip of the rifle. According to Elbit Systems, the ARCAS system provides users with significant capabilities in combat such as video motion detection, fire sources detection, automatic ballistic correction, passive range measurement, etc. In addition, with its interface with tactical command and control, it can receive weapon zeroing, foe or friend identification and navigation assistance without firing live ammunition.

According to the company, the ARCAS system has the ability to detect a human target 1,900 feet or 579 metres away. Recognition is capable at 820 feet or 250 metres, and the soldier can identify the target when the person is 390 feet or 119 metres away.

Elbit Systems’ manager for international corporate communications, Dana Tal-Noyman, explained that the ARCAS system uses various data that the system collects from the target in three stages: detecting, recognizing, and identifying. When a soldier looks through the rifle’s sight mounted with ARCAS, their view becomes similar to a video game with a first-person shooter.

ARCAS will provide layers of data together with the soldier’s view of the environment. The soldier can then push various buttons to toggle among the layers of information, such as ammunition levels, range, motion detection, and other information.

The ARCAS system is suitable for special forces and the average infantry soldiers. Elbit Systems states that they focused on infantry because it lagged in high-tech capabilities that the navy and the air force already use.