The worst business decisions in history

Running a business is a challenge. To remain competitive business leaders have to be able to make tough decisions and adapt. This may involve changing a business strategy, launching a new product, foreseeing opportunities in the market, or completely overhauling a company’s corporate culture.

This article features a list of the four worst high profile business decisions that have been made in history.

This is one of the biggest mergers in history and likely the most failed one as well.

At the time, Time Warner wanted to digitize its content and build an online audience, while the internet company AOL wanted access to Time Warner’s cable systems and tangible assets. The $164 billion deal was approved and in January 2001 the two companies merged.

The merged company failed though, as growth stalled and market share was lost to new high speed broadband providers.

By 2002, the merger resulted in a massive net loss of $99 billion – the largest loss ever reported by a company at the time. The value of AOL stock dropped from $226 billion to about $20 billion.

In 1985 the Coca-Cola Company made the misguided decision to change its flagship product Coca-Cola. The company announced that it was changing the formula for its most popular soft drink. The reformulated product, often referred to as “new Coke,” was the first formula change in 99 years. 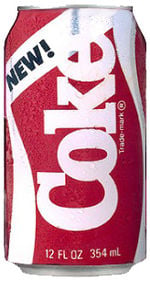 The problem was the product. The Coca-Cola Company underestimated the bond consumers had with the original Coca-Cola drink. Consumers didn’t want “new Coke”.  At one point the company was receiving 1,500 calls a day on its consumer hotline.

In July 1985 the company announced the return of “old” Coca-Cola.

“We set out to change the dynamics of sugar colas in the United States, and we did exactly that — albeit not in the way we had planned,” then chairman and chief executive officer Roberto Goizueta said in 1995 at a special employee event honoring the 10-year anniversary of “new Coke.”

“But the most significant result of ‘new Coke’ by far,” Mr. Goizueta said, “was that it sent an incredibly powerful signal … a signal that we really were ready to do whatever was necessary to build value for the owners of our business.”

3. Excite passing an offer to buy Google for under a million

In 1999, Excite’s chairman and CEO George Bell turned down an offer by Sergey Brin and Larry Page to acquire the search engine they had developed, Google, for $1 million.

In 2014, George Bell was featured on an Internet History Podcast and talked about why Excite turned down the offer.

According to the podcast’s website, Bell said: “I believe that the price was $750,000 in cash, and something like 1% of Excite. The economics of that were really ok to us. The thing that Larry insisted on that we all do recall, is that Larry said, “If we come to work for Excite, you need to rip out all the Excite technology and replace it with Google’s search.” And, ultimately, that’s, in my recollection, where the deal fell apart. Because, we had hundreds of engineers at that point, and culturally, we really were driven by technology. And I didn’t think we could survive.”

In 2000, before on-demand video streaming was a thing, Blockbuster passed an opportunity to acquire Netflix for $50 million. Reed Hastings, founder of Netflix, approached former Blockbuster CEO John Antioco to sell his company. Antioco declined the offer. At the time, Blockbuster was king of the video rental industry.

“Management and vision are two separate things. [Netflix was] losing money,” a former Blockbuster exec said in a Variety interview back in 2013, explaining Antioco’s decision.

Blockbuster eventually went bankrupt in 2010 and Netflix is now a multi billion dollar company, around ten times what Blockbuster was worth.