By winning the world’s largest tender for hydrogen-powered trains, Alstom is on track to help Germany green its rail industry.

Fahme, a subsidiary of Rhein-Main Verkehrsverbund (RMV), have ordered 27 of Alstom’s Coradia iLint trains to replace diesel ones on its Taunus network in the state of Hesse, or Hessen. 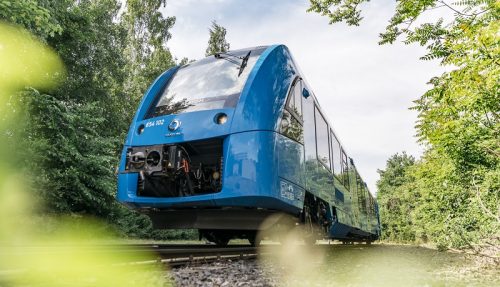 Coradia iLint hydrogen-powered trains emit only water and no carbon dioxide (CO2). They are the first to get their power from hydrogen fuel cells and are designed for use on non-electrified track.

The French rail multinational say that delivery of all their hydrogen-powered trains to RMV will complete “by the timetable change in 2022.”

The contract also covers supply of hydrogen fuel and provision and maintenance of reserve capacity for 25 years.

Infraserv Höchst, the company that operates the Höchst industrial park in the region, will work with Alstom on the supply of hydrogen fuel. They will provide a filling station for the hydrogen-powered trains in the industrial park.

‘A model for Germany’s transport ministry’

Alstom’s share of the €500 million overall RMV hydrogen-powered trains contract is worth around €360 million.

Enak Ferlemann, Parliamentary State Secretary of Germany’s Federal Ministry of Transport and Digital Infrastructure, is delighted with the deal.

“The purchase of 27 vehicles,” he says, “is a lighthouse project for fuel cell mobility, about which I’m very pleased.”

He suggests that the project will “serve as a model” for Germany’s transport ministry and that they hope “that many other projects in Germany will follow this example.”

Hydrogen fuel cells convert hydrogen and oxygen into electricity and water. An electric motor can then use the electricity to turn wheels.

Vehicles powered by hydrogen fuel cells do not emit CO2 like those that run on fossil fuels such as diesel and petrol. They use up hydrogen and oxygen and produce only electricity, water, and heat.

As long as they have a source of hydrogen and air, fuel cells can keep going and do not need to stop for recharging like conventional batteries. Also, they operate almost without noise because they have no moving parts.

Infraserv Höchst is well equipped to provide hydrogen for the hydrogen-powered trains. The industrial park, which produces hydrogen as a byproduct of chlorine production, already supplies hydrogen fuel for trucks and buses.

The hydrogen fuelling station began life more than 10 years ago as part of “Zero Regio,” a project part-funded by the European Union. The purpose of the project was to help cities reduce dependence on fossil fuels, cut pollution and emissions, use energy more efficiently, and promote use of hydrogen and fuel cells in motor vehicles.

‘Steam instead of diesel soot’

There are still many diesel trains running on non-electrified tracks on the Hessen network.

Switching to hydrogen-powered trains is “therefore a quickly feasible alternative to expensive electrification,” says Tarek Al-Wazir, who is Minister of Economics, Energy, Transport, and Regional Development for Hesse.

“In Hessen, transport is responsible for one third of greenhouse gas emissions,” he adds, explaining that, “Steam instead of diesel soot is therefore an exciting approach.”

All 27 of the hydrogen-powered trains will have free Wi-Fi and will display real-time travel information for passengers. Each will seat up to 160 people, and will provide space for wheelchairs, prams, and bicycles. The changeover from diesel stock should increase passenger capacity by up to 40 percent.