Are You Afraid Of Trading? 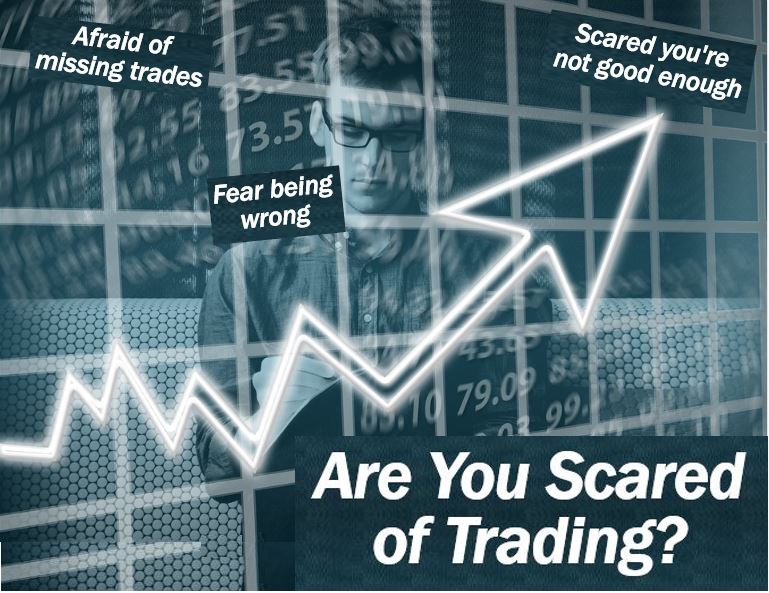 Remember all those times in your life when you were worried about something – terrified in some cases – and that fear almost stopped you from going ahead? It might have been a first date, a new job, a ride on a roller coaster… it could have been anything at all.

What happened then? When you actually had to go through with the terrifying experience, whatever it might have been, it probably wasn’t as bad as you thought it was going to be.

Many people feel this way about trading, but because it’s such a big leap into the unknown for new traders, many allow those fears to get hold of them and stop them from making even a small start. Are you like this? Are you afraid of trading and is it holding you back? Read on and you’ll see the biggest fears that a lot of people have, and how to get over them so you can enjoy your trading journey. While we recommend taking trading courses for long term success, the below tips will help increase your understanding.

One big fear that many new (and some more experienced) traders have is of missing out on potential trades. There are always going to be plenty of ‘what ifs’ in trading due to its very nature – it is random, and it is unsure (although a good trading plan will help to tame it somewhat). That doesn’t mean you have to trade every day. It doesn’t even mean that you have to trade every week. What it means it that you have to have patience, and only trade when your charts say it’s right.

Don’t worry about missing out. If you’ve worked hard on your chart and you believe in it, then only trade when it tells you to. Don’t trade when nothing is going to make sense for you. And don’t think about the ‘what ifs’. There are too many variables and if you start down this road you’ll never stop (and you’ll either never trade again or you’ll throw you entire portfolio away because you want to try every trade you possibly can).

But why would you be wrong when you trade? Again, this is the point of doing your background research and of having trading charts that you can rely on. When you only trade when it makes sense to (as we discussed in the point above), then you are much less likely to be wrong. Plus, if you only trade money that you can afford to lose – small amounts, a little at a time – then should something go wrong and you do make a mistake, it won’t be the end of the world (nor will it be the end of your trading career).

Not Being Good Enough

Some traders link their self-esteem and their value in life with the success of their trades, and this means they can psyche themselves up into a frenzy of fear every time they want to trade. They worry that if they get it wrong, or don’t make as big a return as they could have, others will look at them as failures. Instead of simply enjoying trading, it becomes about showing off, about being the best, about proving something to other people.

The key to having a good time when you trade is to do it for yourself. To love what you’re doing and to rewarded for doing it. Trading is not and should never be about trying to be better than someone else, or proving your worth. When you have this kind of attitude to trading, you’re more likely to make mistakes.

What is a Trader? Video

This Market Business News video explains in simple terms what a trader does.