Many crops can thrive just as well, if not better, under solar panels. Realizing this has led scientists to look into how to combine solar and agricultural farming. Now, a new study concludes that installing solar panels on less than 1% of agricultural farmland could satisfy the world’s demand for electrical energy.

Researchers from Oregon State University (OSU) in the United States explain how they investigated the scope for combining solar and agricultural farming in a recent Scientific Reports
study paper. 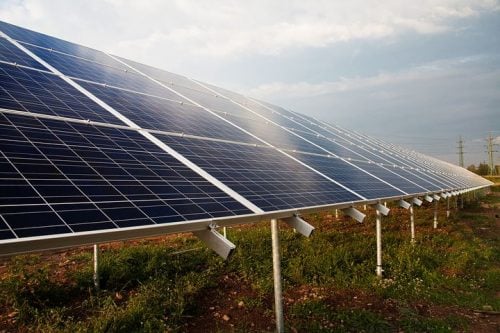 “Our results,” says Chad W. Higgins, the study’s corresponding author, “indicate that there’s a huge potential for solar and agriculture to work together to provide reliable energy.”

Farmers discovered the best places to capture sunshine to grow crops thousands of years ago.

Higgins and his colleagues found that it so happens that these are also the best places for efficient capture of the sun’s energy by solar panels.

“Solar panels are finicky,” says Higgins, who is an associate professor in the College of Agricultural Sciences at OSU.

“Their efficiency drops the hotter the panels get,” he adds.

Those planning to install large solar farms in the desert should probably heed this advice.

The growing field of agrivoltaics

The idea of combining solar and agricultural farming is known as agrivoltaics. The number of scientists working in this new field is increasing.

For example, at the University of Arizona (UA), researchers are investigating how agrivoltaics can deliver eco-friendly solutions.

One of their projects is experimenting with solar and agricultural farming in the hot, arid conditions of the Sonoran Desert.

They are finding that by growing certain crops under solar panels, it creates a win-win for both the crops and the efficiency of the solar panels.

Not all crops lend themselves to growing in the shade below a solar panel. Wheat, for example, needs full sun, but plenty of other edible plants thrive in semi-shade.

In a combined solar and agricultural farming system, the plants keep the temperature under the solar panels cooler than if the panels were just standing on their own in the desert heat.

This reduction in temperature increases the efficiency of conversion of solar energy into electricity.

In return, the shade of the solar panels creates the right microclimate for the shade-loving plants to thrive, protecting them from dehydration and being burned up by the sun.

They are also looking into growing alfalfa, lettuce, sweet potato, yam, and taro under solar panels in the Sonoran Desert.

In the new study, Higgins and the rest of the team at OSU analyzed data on power generated from solar arrays on state-owned agricultural land in Oregon.

They correlated the solar power data with microclimate data that they collected from under the panels.

From this analysis, they created a model that shows the efficiency of the solar panels as a function of key microclimate variables, such as wind speed, humidity, and air temperature.

The model shows that efficiency gets worse as temperatures gets hotter. Also, when there is no wind, efficiency drops: it seems that some wind is necessary for optimum solar panel efficiency.

Humidity also has an effect on solar panel efficiency. They don’t like high humidity.

“Solar panels are just like people and the weather,” Higgins explains, “they are happier when it’s cool and breezy and dry.”

Having tested the solar and agricultural farming model at the local level, the researchers then scaled it up using global maps based on satellite images.

They applied the model not only to croplands but also to 16 other types of land, including mixed forest, urban, and savanna. They then ranked the types of land according to the estimated productivity that solar panels would have if installed on them.

Finally, they used the model to assess the potential for combining solar and agricultural farming to meet the World Bank’s estimate of global demand for electricity.

“Global energy demand would be offset by solar production if even less than 1% of cropland were converted to an agrivoltaic system,” the authors conclude.