6000 People Surveyed Reveal How they will be Impacted by the Cost of Living Crisis & The Changes they will be Forced to Make to Manage Their Finances; including Turning Heating off, Cancelling TV Subscriptions, Borrowing More, Saving Less and Selling Personal Items

– 94% (UK) and 92% (US) of people say cost of living increases will have an adverse effect on household finances with 26% (UK) and 20% (US) saying it will have an extremely detrimental effect.

The cost of living has become a global issue that is inescapable for many people. Thanks to the ongoing COVID pandemic, the energy crisis, supply issues, fuel shortages and price increases, and the atrocities of war in the Ukraine, people around the world are facing price rises across multiple industries, and things don’t seem to be getting any better.

SellCell.com—a money-saving site that helps customers find the best deals for their tech —wants to understand how the cost-of-living crisis is going to affect the everyday person in both the UK and the US, and gain knowledge on the main lifestyle changes people will be forced to make in order to accommodate the ever-increasing price hikes they face.

In order to obtain such information, SellCell has surveyed 3000 UK and 3000 US citizens to find out exactly how the cost-of-living crisis will affect them.

SellCell surveyed 6,000 respondents, split equally between the UK and the US. The survey asked respondents across ten questions, how serious the financial effects of the cost-of-living crisis will be for their household, where they will make savings and cutbacks, whether they will take on additional work, if they worried about forthcoming Christmas spending, and whether they feel supported by their government.

The data compiled through the survey will give insight into how the cost-of-living crisis will play out for millions of people across the globe.

Summary of US Findings

SellCell’s findings, in general, paint a harrowing picture. It is plain to see that the cost of living is causing concern for many people who are feeling the brunt of the crisis. Below, it broke data down into survey questions and the responses thereto.

1. On a scale of 1 to 10, how drastically has/will the cost-of-living rises affect your household financially? 1 = No Effect 10 = Finances Seriously Affected 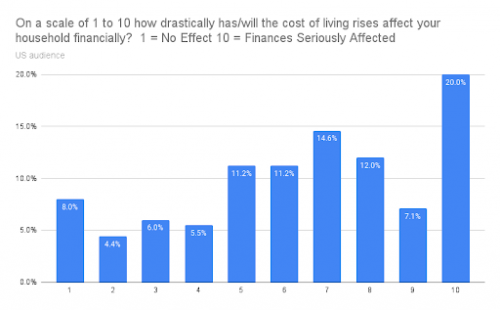 As you can see from the above data, an overwhelming 26.1% of the UK has suffered or will suffer serious household financial effects because of the cost-of-living crisis. In fact, 94.1% of all respondents can see some form of financial hardship becoming a reality, with 5.9% stating they won’t see any effect. In terms of age groups, 32.7% of those aged 25-34 feel that their finances will be seriously affected.

In the US, 20.0% of respondents say that the cost-of-living crisis has or will seriously affect their household finances. Only 8.0% can’t see any issue, meaning that 92.0% of US household finances will suffer the effects of the cost-of-living crisis. As with the UK, the US’ 25-34-year-olds see themselves as the hardest hit, with 26.2% of people within that age group seeing finances seriously affected.

2. Are you planning on taking any of the following measures in your home to save money? Select as many as you want. 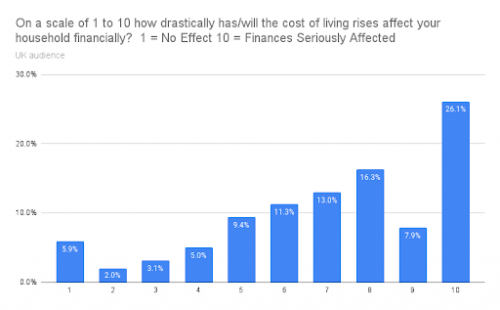 Clearly the energy crisis is fueling concerns in the UK, as 70.2% of the population will reduce or switch off their heating, and 62.4% will aim to use less electricity. 37.8% of people will save money on meals by batch cooking or adopting a zero waste approach. As many as 5.0% of respondents feel they’ll need to move home entirely. 15.3% of people won’t be taking any of the listed measures in the foreseeable future.

In the US, we see a more balanced set of responses to saving on household expenses. While a fairly large percentage (36.4%) won’t take any measures listed, 32.7% of people will reduce their journeys in the car, or start walking or using public transport more often. 30.4% will reduce heating use, and 27.9% will reduce electricity use. 6.2% (1.2% more than the UK) say they’ll need to move into a smaller house to make ends meet.

3. Are you planning on doing any of the following to reduce your day-to-day spending to save money? Select as many as you want. 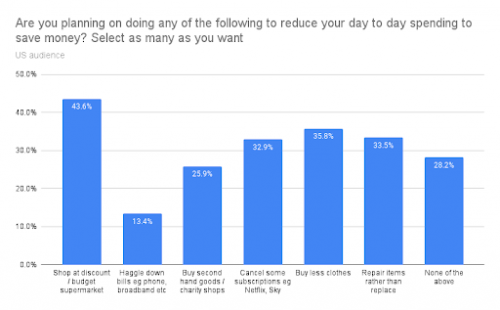 For day-to-day spending, 56.8% of the UK will shop at a discount or budget supermarket, a result of rising import prices and the cost of such being passed on to the consumer. Subscription services look set to lose up to 38.9% of their customer base, and clothes stores will see 38.4% less custom as consumers look to reduce outlay. 20.3% of people won’t change their day-to-day spending habits based on the available options.

In the US, we can see that 28.2% of participants won’t need to reduce day-to-day spending based on the options listed. However, the US will predominantly make savings by shopping at a budget supermarket, with 43.6% of those asked responding in the affirmative. Buying clothes is the next day-to-day cost the US population will tackle, with 35.8% cutting out clothes shopping. 33.5% of people will repair broken items, at a fraction of the cost of replacing the device altogether.

4. Are you planning on doing any of the following to reduce spending on luxuries to save money? Select as many as you want. 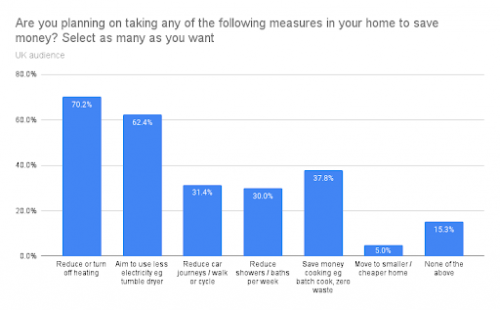 Luxury expenses will also take a knock in the UK. 52.0% of people will stop or reduce going out, and 51.4% will stop eating at restaurants or ordering a takeaway. 41.4% will resist the urge to buy the latest gadget (bad news for Apple?) and 38.7% will stop or reduce the number of holidays they enjoy each year. 24.0% won’t reduce spending on luxury items and services listed.

In the US, we see that 30.2% of citizens don’t feel they need to reduce luxury expenditure in the face of a cost-of-living crisis, at least not with the options presented to them. 47.0% will reduce their entertainment intake and going out, and 41.5% of people won’t be hitting their favorite restaurant or takeaway for the foreseeable future. 4.8% of those asked feel they’ll need to sell their car and use public transport to reduce spending.

5. Are you planning on doing any of the following to make extra cash? Select as many as you wish. 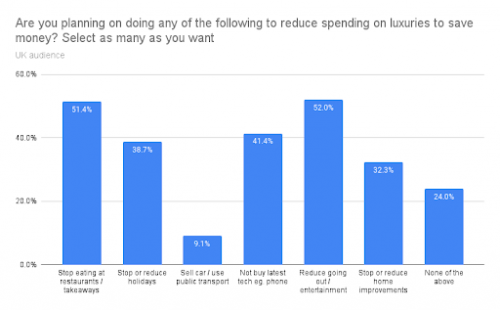 While it may seem positive that 55.8% of the UK won’t feel the need to make extra cash from the listed options, that leaves 44.2% of the population who will need extra money coming in. 24.1% of people will do this by selling possessions such as clothes and jewellery, while 20.3% will sell old or unwanted tech. 14.6% will take on a second job or start a side business, while 5.7% will enter the gig economy (perhaps unwise considering how many people will cut out takeaways and nights out to cope with the rising cost of living).

58.8% of respondents in the USA don’t feel the need to make extra cash via the methods proposed, leaving 41.2% who will need additional funds to cover the cost-of-living expenses. 18.0% of people are looking to start a second job or launch their own side business, while 17.0% plan to make extra money by selling possessions. 10.8% will sell their old tech, while 9.6% will look to their employer for help, and ask for a pay rise.

6. On a scale of 1-10 how worried are you about the pressures of Christmas gifts / spending? 1 = Not Worried 10 = Extremely Worried 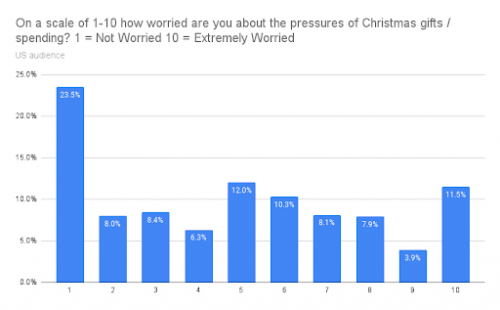 With Christmas only a few months away, many people are feeling the pressure. Almost a quarter (24.8%) of the UK is extremely worried about Christmas spending. In fact, overall, only 12.9% of those asked said they weren’t worried to some degree, meaning 87.1% people are concerned about forthcoming Christmas expenditure.

Christmas spending seems to be less of a worry to the US, as 23.5% of respondents stated that the cost of Christmas isn’t a concern. However, 11.5% of people are extremely worried about how Christmas is going to look, financially, and 76.5% overall who are anxious about their forthcoming Christmas spend.

7. Will you be reducing your Christmas spending this year? 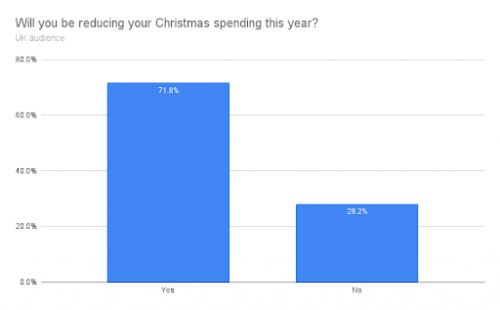 If responses to the next question are anything to go by, stores on the internet and the high street will see less money coming in over the Christmas period. 71.8% of UK participants stated they will reduce their financial outgoings this Christmas, leaving just 28.2% who don’t feel they need to tighten their belt this year.

8. Do you believe you have enough support from government services? 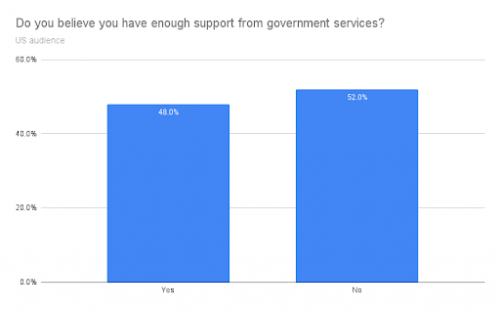 The UK clearly doesn’t feel that its government is doing enough to assist those facing the cost-of-living crisis. Fuel price caps are an endlessly moving set of goalposts, while public services are under-funded, and people cannot find the help they need. Only 25.4% of respondents feel they are receiving supportive service from the government.

In the wake of Joe Biden’s ascent to president, it would seem that more US people are feeling the benefit of government services during the cost-of-living crisis. In fact, while 52.0% don’t feel the government is doing enough, 48.0% do feel like the government is giving them the help they need in difficult times, almost double the result for the UK.

9. Will you have to take out a loan or put expenses on credit cards to be able to afford to pay for everything? 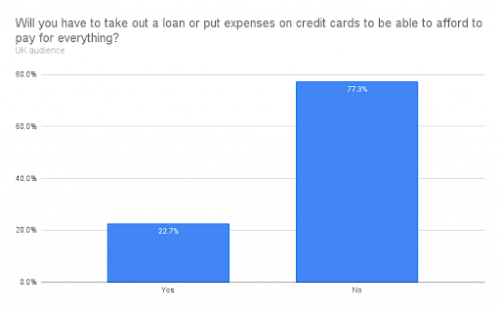 When asked whether they will need to take out a loan or utilise credit cards in order to deal with the cost-of-living crisis, over 1/5 (22.7%) have said they will. This is dangerous territory, as people will end up in further debt as they borrow to keep afloat.

The story in the US is similar. In fact, almost a quarter (24.8%) of people have said they’ll rely on a loan or credit card to cover costs. This leaves 75.2% who thankfully won’t have to increase the burden of debt in order to live day-to-day.

10. Which of the following applies to you? Select one. 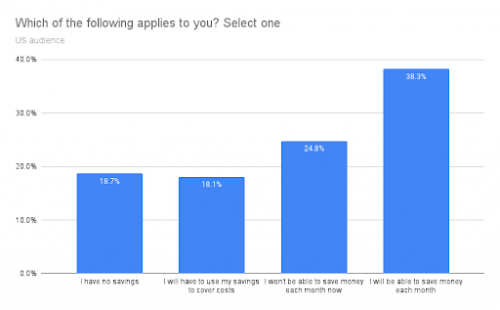 It would seem that the highest percentage of people in the UK—33.5%—have no savings at all. Of those who have savings in the bank, 21.4% will have to use existing savings to fund the cost of living. 25.5% won’t be able to save each month. However, 19.5% of UK people will still be able to put something away each month.

Figures look healthier in the US. 38.3% of people report they will still be able to save money each month and deal with the cost-of-living crisis at the same time. 18.7% of US participants have no savings, while 18.1% of those asked stated they’ll need to use their savings in order to survive. 24.8% of people will reduce the frequency with which they save, no longer saving with each monthly pay packet.

The cost of living crisis isn’t just affecting the UK and the US. It is happening all over the world, and the everyday person is really starting to feel the pressure of rising costs. With governments seen as not doing enough to help, and with gas and electricity prices sky-rocketing, many people are understandably concerned about how to make ends meet.

Some people do have solutions, but most of these are temporary or short-term, such as entering the gig economy, selling old tech, or starting a small business. Hopefully, we can see an end to this crisis soon, and see people treated more fairly as a result.

SellCell surveyed 3,000 UK and 3,000 US adult (18+) . People were surveyed using a series of ten questions, in order to ascertain the severity of the cost-of-living crisis for people, and to see how their spending habits may change as a result of the crisis. No personal data was collected or stored during this survey.

SellCell is a smartphone and tech price comparison service, which allows people to sell their old smartphones and other devices and make the most money in the process. Given its authority in the market, it is a trusted service for those looking to make and/or save money by selling their old tech and buying refurbished tech, as part of the circular economy.

SellCell is a well known, reputable data source, regularly featured on authority tech websites and in press, including Forbes, CNET, the Daily Mail, The Express, The Sun, Entrepreneur, CNBC, and many more, for data-driven surveys and studies.