An accrual is a gradual increase in an amount of money. It is the addition as the total amount of money grows. In finance, the accrual of something is the adding together of different investments or interests over a specific period.

In accounting, accruals allow an organization to record revenues or expenses for which it expects to receive or spend money respectively in a future reporting period. Accountants do not post an income for a service when they receive payment. Instead, they divide the income equally each month during those months when the company is providing the service.

As a verb, ‘to accrue’ means to grow due to accumulation over a given period. For example “Interest will accrue on the investment at a rate of 6%.”John the window cleaner enters income when he does the job – not when he receives payment. He uses the accrual accounting system. With the cash accounting system, he would have entered one payment in January and two in February. Most companies’ accounting departments use the same system John does.

Imagine a company – John Doe Inc. – needs to insure one of its buildings. The insurance firm bills John Doe $600 in January and July each year.

John Doe does not record one $600 expense in January, and another one in July. Instead, it records a $100 expense each month of the year, because it uses an accrual system.

In a cash accounting system, accountants enter $600 as an expense in January and July respectively. In an accrual system, on the other hand, they enter $100 each month of the year. 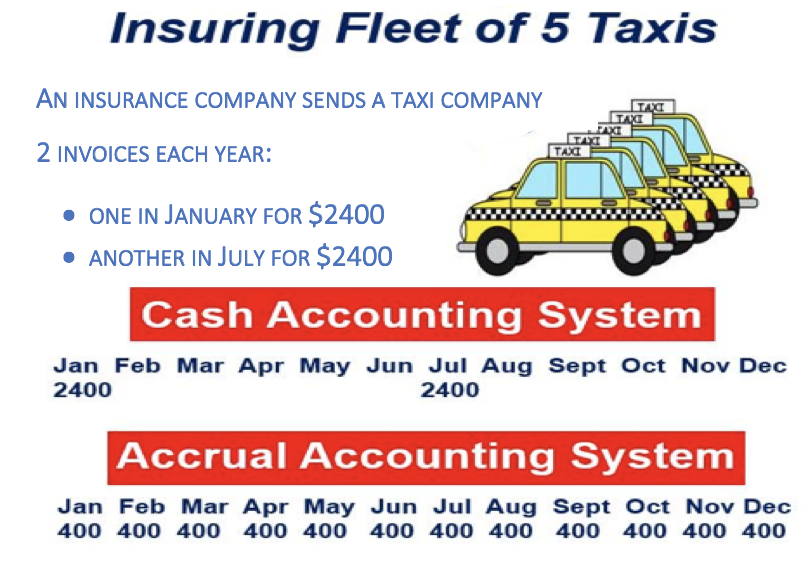 The taxi company in the image above enters the fleet insurance expenses monthly. The company divides the $4,800 per year total by 12. With an accrual accounting system, you can enter the expense during the months when your supplier is providing the service. In this case, the company has insurance coverage for the taxis 12 months of the year. In contrast, with a cash accounting system, the company would only enter the expense when they paid each invoice.

The problem with cash accounting, however, is that profits and losses for each month can fluctuate sharply.

Therefore, if you do all the jobs in one month but money does not arrive until the following month, what happens?

The first month will be a high-cost-no-income month, while the next month will be the opposite. The accountant will record a huge loss and then an enormous profit in the first and second months respectively.

According to BusinessDictionary.com, accruals are:

“Short-term liabilities which continually occur during an accounting period but are not supported by an invoice or a written demand for payment. When preparing financial statements for that accounting period, such liabilities are estimated on the basis of experience (based on previous payments).”

Accrual bonds, also known as zero coupon bonds, pay no interest. However, the issuer sells them at a substantial discount to face value.

The money the purchasers make occurs when they redeem (sells) them at full value. CATS (certificate of accrual on treasury securities) are zero-coupon US Treasury issues. CATS sell at a considerable discount to their face value.

When a finance-related item accrues, it essentially builds up for payment at a future date. Assets and liabilities may accrue over time. Hence, the term ‘to accrue’ in finance is synonymous with ‘an accrual’ under **GAAP and IFRS.

Accrued interest refers to the interest that has been accumulating since the principal investment of a bond or the original amount of a loan.

This Khan Academy video provides an example of accrual accounting. The tutor takes you through each month. He shows that we enter income when the supplier is providing the service, rather than when the money arrives. Accrual accounting contrasts with a cash-accounting system.