The word budget, which can be a verb, noun or adjective, has several possible meanings. The term may refer to an estimate of the overall costs of a project or a forecast of expenses and revenues over a specific period. It may also relate to how much money I have for a project, product, or my department.

When the term refers to estimating revenues and expenses over a future period, we compile and re-evaluate it regularly. In this sense, it does not have the same meaning as forecasting.

Surplus budgets are good news. They mean we predict that sales will exceed expenses. In other words, they mean that we forecast a profit.

Deficit budgets, on the other hand, mean we expect expenses will exceed income. 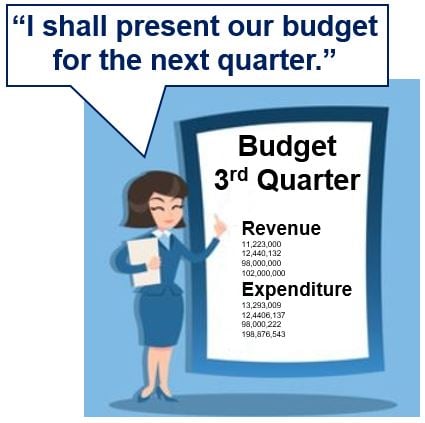 A budget may be a plan that we express in money. We prepare and approve it before the financial period. It typically shows income and expenditure. Sometimes it also includes the capital that the company is going to employ.

Budgets are not only made for companies. Countries, governments, multinational organizations, and even private individuals use budgets. In fact, all entities that make, receive, and spend money have budgets.

It is a microeconomic concept that shows the trade-off made when we exchange one good for another.

The term can also mean how much money is available to spend on something.

Imagine you are buying a car. The sales person shows you a car that costs more than you had planned to spend. You might say “Lovely car, but I am afraid it exceeds my budget.”

You might then ask what cars they have up to a certain price. 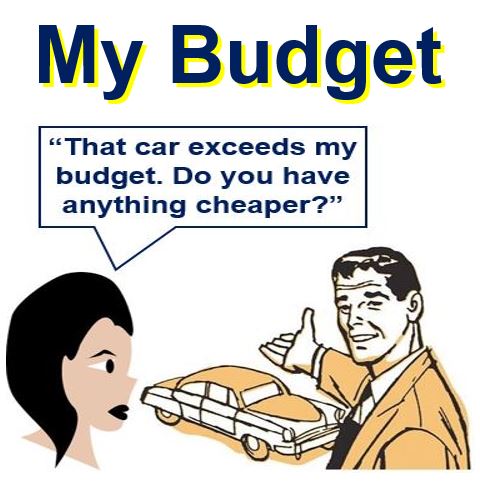 In this image, the woman’s budget is how much money she has put aside to buy a car, In other words, how much she can afford.

If I say “Nice, but I had not budgeted for that amount,” it means I cannot afford it. I had planned to spend less than the price of that product.

If a company needs to economize, it will probably reduce how much it spends on some departments.

If you go on a ‘budget vacation’ it means a cheap vacation. If a customer at a car rental sales room says: “I’d like to rent a budget car,” it means he or she wants a cheap one.

In other words, when the word is an adjective, it nearly always means ‘cheap.’

Every year, the British Government explains how it will spend the nation’s money for the next 12 months. This happens in March.

The Government also announces how it will collect enough funds to pay for that spending.

This announcement is called The Budget.

The Chancellor of the Exchequer calculates how much the Government will spend and collect in taxes. People who work in the Treasury help the Chancellor with the calculations. The equivalent of the British Chancellor in other countries is Minister of Finance.

The UK Government, like all others across the world, gets its money through taxes. The Chancellor explains what changes there will be in taxes over the next 12 months.

Companies have fixed and variable costs. Fixed costs remain the same all the time. Variable costs, on the other hand, change from month-to-month. Hence the word ‘variable.’

Etymologists (people who study the origin of words) say the English word ‘budget’ appeared in the early fifteenth century. At that time it meant a ‘leather pouch.’ It came from the Middle French word bougette. Bougette is the diminutive of Old French bouge, meaning a ‘pouch, wallet or leather bag.’

The French word originated from the Latin bulga, meaning a ‘leather bag.’

It was not until 1733 that budget assumed its modern financial meaning. The Treasury Minister used to keep his fiscal plans in a leather wallet.

According to BusinessDictionary.com, ‘budget’ is:
“An estimate of costs, revenues, and resources over a specified period, reflecting a reading of future financial conditions and goals.”

Video – What is a budget?

This Vernon Davis video explains what a budget is.