What is code? Definition and examples

A code is a system for making messages shorter or secret. To read a coded message you need a key that unlocks the code. The term also has meanings in mathematics, computing, ethics, and many other fields. In these cases, it often combines with other words, such as binary code, Morse code, and so on. 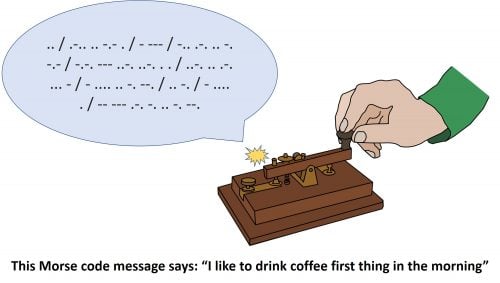 Oxford Learner’s Dictionaries define code as “a system of words, letters, numbers or symbols that represent a message or record information secretly or in a shorter form.” This article deals primarily with this meaning. It gives some examples of other meanings at the end.

Secret codes, or ciphers, are messages that you need a key to unlock. The sender codes the message using the key and the receiver decodes it using the same key. Codes can be easy or hard to crack, depending on how sophisticated the key is.

An easy cipher or code to break is one that uses a straightforward substitution key. An example is “monoalphabetic shift 1.” In this key, A becomes B, B becomes C, C becomes D, D becomes E, and so forth. Using this key, CBE decodes into BAD, since C=B, B=A, and E=D.

Julius Caesar used a simple substitution key to hide his messages from his enemies. He often used monoalphabetic shift 3. The key for this is shown below:

Applying some basic techniques to solving substitution ciphers can be a stimulating, fun pastime.

Transposition is also a straightforward system. A substitution key is one that replaces each letter with a different letter or symbol. A transposition key just moves the letters around.

Let us take the phrase IT IS RAINING CATS AND DOGS. Writing this phrase backwards produces the transposition cipher SGOD DNA STAC GNINIAR SI TI. Another type of simple transposition is to reverse the letters of each word but keep the words in the same position: TI SI GNINIAR STAC DNA SGOD.

Cryptography is the study of securing messages so that only senders and receivers – and not third parties – can read them.

Since the days of Julius Caesar, cryptography has progressed from simple manual keys, through complex mechanical devices, to sophisticated computer technology.

Perhaps the most famous cipher device in history is the Enigma machine that the German military used in World War II. The machine’s system of rotors and plug board was capable of generating a massive number of possible codes.

Nowadays, by harnessing the processing power of modern computers, it is possible to code and decode large tracts of encrypted text in a few seconds. The basic idea, however, remains the same: the sender and receiver have to use the same key to encode and decode the message.

Morse code is a system of communication that uses just two types of signal – such as long and short, or dot and dash – to represent letters and numbers. It takes its name from Samuel Morse, a 19th century American artist and inventor. Together with the Morse telegraph, Morse code revolutionized global communications in the 19th century.

Wireless transmission also relied on Morse code in its early days. The code featured in two events that stand out in history: the first transatlantic radio message that Marconi sent in 1901 and the distress signals that the ocean liner Titanic sent out on her disastrous 1912 maiden voyage.

Morse code use has declined as communications technology has advanced. On land, teleprinters allowed operators to key in messages directly using letters and numbers for printing out remotely. At sea, ships continued to use Morse code for longer, but eventually with the growth of satellite communication, they too stopped using it.

However, there are many who still use Morse, such as radio amateurs who value its simplicity and ships that cannot afford expensive high-tech equipment.

For fun, why not try making your own Morse code message? Use this translator to make a visual or audible version.

Binary code is a number system that only has two symbols: 0 and 1. Computers “think” in binary because their “brain circuits” are digital – their components have two states: on and off.

The signals that travel in computer circuits are combinations of 1 (for on) and 0 (for off). They are not continuously varying like the signals in analogue circuits.

The binary system relates to the decimal system as follows:

A binary number with four digits can have 16 possible values: 0000 through to 1111. In hexadecimal, this runs from 0 to F. One hexadecimal digit is equivalent to four binary digits. This makes for a special relationship between the two systems.

Computer scientists use hexadecimal notation as a user-friendly way to represent binary codes. For instance, take the decimal number 63. It is easier to get a feel for how big this number is when you see it in hexadecimal (3F) than in binary (111111).

Other meanings and examples

The term code – often in conjunction with another word – also has several other meanings. The following list gives some common examples.