What is a contract? Definition and examples

A contract is an agreement between at least two parties. The agreement may be in written form or oral (spoken). Contracts are legally enforceable because they adhere to certain legal requirements. In most cases, the agreement includes the exchange of money, services, goods, or promises. 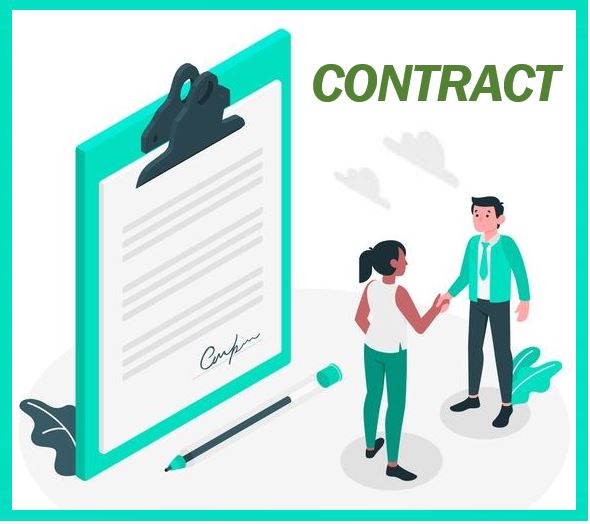 When the parties have signed the agreement, if it is in writing, they both (all) have created mutual legal obligations. Even though contracts may be written or oral, you should try to avoid oral ones because they are harder to enforce, i.e., easier to challenge.

In the United States, United Kingdom, and many other countries, for agreements involving large sums of money to be valid, they must be written. A large sum of money, in this context, is about $500 or more.

LegalMatch.com has the following definition of the term:

“An agreement between two private parties that creates mutual legal obligations. A contract can be either oral or written. However, oral contracts are more challenging to enforce and should be avoided, if possible.”

Characteristics of a legal contract

Law experts say that a legal contract should have the following components or characteristics:

However, if I hire Adam to supply me with 1 kilo of cocaine each month, I won’t be able to enforce any kind of contract because the agreement is illegal. Supplying cocaine is against the law.

A contract needs to have reached a meeting of the minds, i.e., all parties agree to the terms of the agreement. If a party signed under duress – they were forced to sign – and can prove that this happened, the agreement is not enforceable.

In this context, consideration refers to the value that one party gives to the other for a service, product, or exchange of money.

“Consideration: This is the value given by one party to another in exchange for the service or product. It can be money or another type of benefit. Without consideration people generally don’t enter into a simple contract.”

All parties are serious about adhering to the terms of the contract, i.e., they intend that the mutual agreement is a legally binding contract. They do not see it as an informal, social, or domestic arrangement.

Everybody who signs the contract has to be competent, i.e., they must be of legal age, not under the influence of psychoactive drugs, and are of sound mind. Something that is psychoactive affects the mind – it alters the way you think.

The terms within the agreement need to be clear and precise enough to be enforceable.

It is possible, in some cases, to terminate a written agreement. If you are not a legal professional, you should definitely hire a lawyer.