A cryptocurrency is a type of digital money, i.e., it only exists electronically. The creators of cryptocurrencies designed them to be secure, and in most cases completely anonymous. In other words, you cannot follow the cryptocurrency money trail like you can with dollars, pounds, and other currencies. It is an online currency that uses cryptography.

We also refer to it as an alternative currency or virtual currency.

The Oxford Living Dictionaries have the following definition of the term on their website:

“A digital currency in which encryption techniques are used to regulate the generation of units of currency and verify the transfer of funds, operating independently of a central bank.” 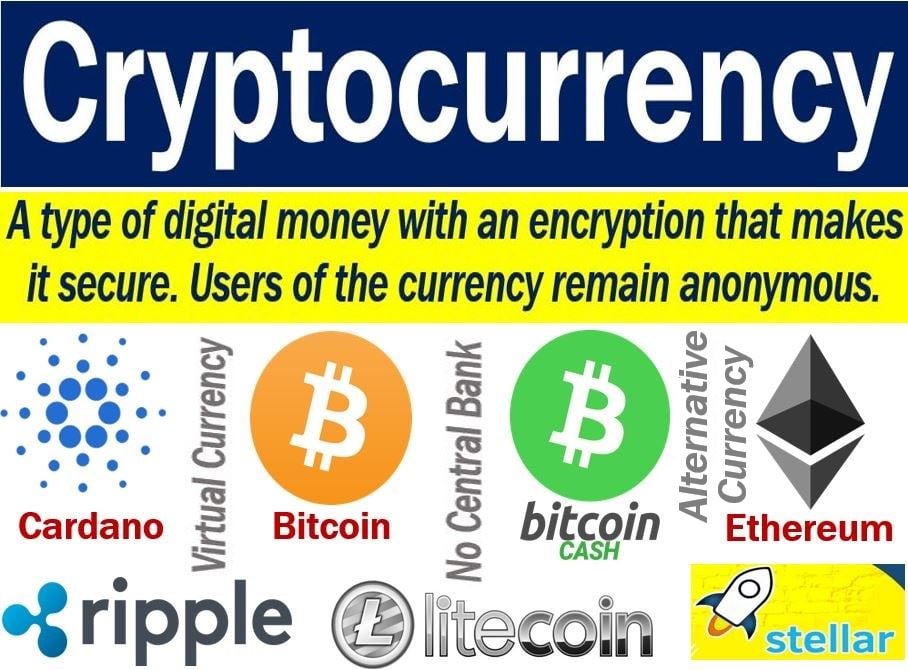 Ever since the birth of cryptocurrencies, experts have been debating on whether they have a future. Billionaire investor Howards Marks once said that cryptocurrencies were “nothing but an unfounded fad (or perhaps even a pyramid scheme), based on a willingness to ascribe value to something that has little or none beyond what people will pay for it.”

Etymology is the study of the origin of words and how their meanings have evolved.

The term ‘cryptocurrency’ first appeared in the English language at the end of the first decade of this century. It is the result of joining the words ‘crypto‘ and ‘currency‘ together.

Crypto is short for cryptography, i.e., the art of making and deciphering codes.

A currency is the system or kind of money that a particular country uses. Currency also refers to banknotes and coins, especially as part of the money supply. The US dollar, British pound, European Union’s euro, Swiss franc, and Japanese yen, for example, are currencies.

Therefore, a cryptocurrency is an encrypted code that people use as a currency. The code or cryptography makes the currency secure. It is extremely difficult to make counterfeit cryptocurrencies because of their security feature.

A blockchain provides the validity of each cryptocurrency’s chain. It is a growing list of blocks (records), which are secured and linked using cryptography.

One individual block usually has a hash pointer as a link to a block that preceded it. It also has a timestamp and transaction data. Cryptocurrency creators designed blockchains to be resistant to data modification.

The first block in a blockchain is the Genesis Block. Genesis Blocks have no data on previous blocks because there is no block before them.

Webopedia says the following regarding blockchains:

“Blockchain refers to a type of data structure that enables identifying and tracking transactions digitally and sharing this information across a distributed network of computers, creating in a sense a distributed trust network.”

“The distributed ledger technology offered by blockchain provides a transparent and secure means for tracking the ownership and transfer of assets.”

Miners check that transactions are correct and add data to each block. When the miners complete each process, they receive a reward in the form of new currency units. We call what the miners do cryptocurrency mining.

We refer to the computers that link to the blockchain network as nodes.

The blockchain stores smart contracts, i.e., lines of code. These lines of code allow the contract to be self-executing. There is not need for intermediaries such as lawyers.

The most famous cryptocurrency in the world today is Bitcoin. Satoshi Nakamoto, who claims to be Japanese, created Bitcoin in 2009 using C++, a programming language.

We call all cryptocurrencies other than Bitcoin ‘Altcoins.’ Altcoin stands for ‘alternative coin.’

According to bigthink.com, the top ten cryptocurrencies today are (in order of importance):

The cryptocurrency Dogecoin started off as a joke, but caught on rapidly and strongly. Its market capitalization has reached over $2 billion.

If you want to buy, sell, or store Bitcoins, Litecoins, etc., you must have a cryptocurrency wallet. It is a software program that stores public and private keys. The keys interact with blockchains and enable users to send and receive cryptocurrencies. The wallets also monitor the owner’s balance.

Cryptocurrencies and the future

Do cryptocurrencies have a promising future? Are they here to stay or will nobody be talking about them in a decades’ time. Experts seem to disagree on the prospects of digital currency.

Ethereum’s co-founder, Vitalik Buterin, warned in February 2018 that cryptocurrencies could lose virtually all their value at any moment.

Did you know that several universities today offer Bitcoin and blockchain courses?

Video – How does a cryptocurrency work?

This SciShow video explains how cryptocurrencies work. The speaker begins by asking us to image a coin that’s worth hundreds and even thousands of US dollars. However, it is not made of silver, platinum, gold, or any precious metal.

In fact, it is not a coin you can touch, i.e., you cannot hold it. You cannot even put it in a piggy bank.

It is a digital currency. In other words, it only exists electronically. It is an abstract phenomenon.